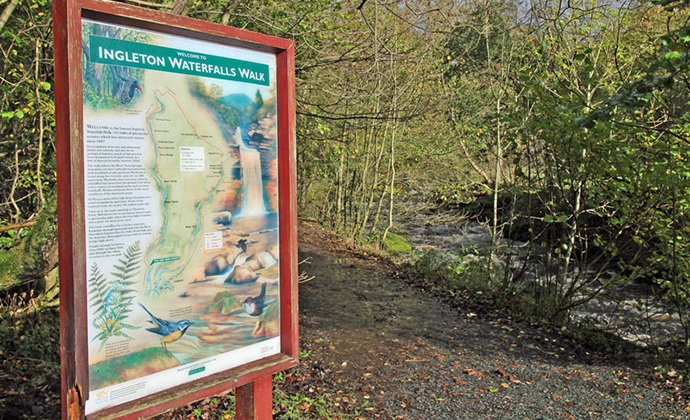 A handy sign marks the start of the Ingleton Waterfalls Trail © Andrew Locking/www.andrewswalks.co.uk

This 4½-mile walk is a little classic. The walkers’ oracle Alfred Wainwright himself declared: ‘Surely, of its kind, this is the most delightful walk in the country. And not only delightful; it is interesting, exciting, captivating and, in places, awesome.’ The trail is well signposted in Ingleton and starts down in the valley bottom where the Thornton road crosses two small rivers, just above their confluence to form the embryonic River Greta. If you are in a car it is worth parking down here by the café rather than up in town, as your walk entrance fee includes parking.

Traditionally the route is clockwise ascending the valley of the River Twiss first; do not be tempted to go maverick, starting with the River Doe and travelling anti-clockwise. You may think that you are avoiding the crowds (and the fee) but in reality you will meet everybody else travelling in the opposite direction at some point, probably on all the steep and narrow staircase sections! For solitude, and that would always be my choice on a walk as beautiful as this, the advice is go early. Last time I visited, the nice man in the ticket office said, ‘We officially open at 09.00 and I couldn’t possibly condone anyone setting off before then as they would not be covered by the owner’s insurance (said with a twinkle in his eye). In any case, it never gets busy until about 11.00… lazy lot these trippers.’ Another alternative recommended by Wainwright, who was a confirmed sociopath, is to do the walk in winter when there are no crowds and the falls are either roaring with flood water or festooned with ice sculptures.

As soon as you enter the limestone gorge of Swilla Glen near the start of the walk, it becomes obvious why this area is deemed so special, Natural England designating it as a Site of Special Scientific Interest (SSSI) for its geology alone. The fenced path clings to the valley side as it passes through a tunnel of overhanging ash and hazel boughs on its way to Manor Bridge and the first of the cascades, Pecca Falls, as it leaps over a hard band of greywacke rock. In the next 500 yards the river tumbles over seven rock steps at Pecca Twin Falls, Hollybush Spout, other nameless rapids and finally, Thornton Force, at 46 feet the highest of them all. This time the hard ledge is limestone and the soft rock beneath is vertically folded slate. 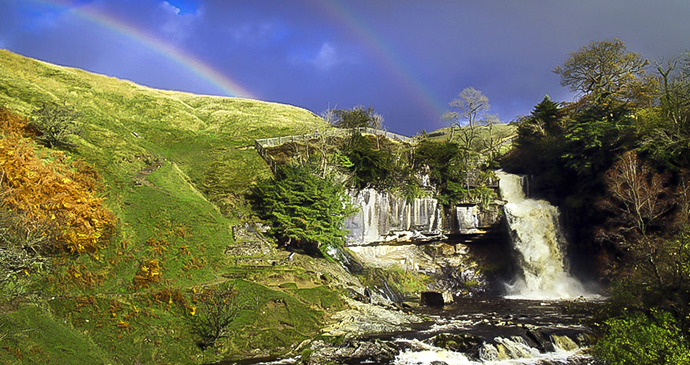 Thornton Force is the highest of the falls dotted along the Ingleton Waterfalls Trail © Andrew Locking/www.andrewswalks.co.uk

For the laid-back and sedate, this is the ideal spot for a laze and/or picnic, while the bold and restless members of the party brave the slippery walk behind the falls or swim in the plunge pool itself. Not far above Thornton Force, the route leaves the Twiss Valley to contour around the hill on the very old Twisleton Lane track and reaches a high point of 934 feet above sea level before joining the valley of the River Doe for the descent.

Beezley Falls marks the start of the most dramatic section of the whole walk, and is closely followed by Rival Falls and the dark depths of Baxengill Gorge. The inaccessible nature of this place has left the woods relatively undisturbed to form one of the best remnants of ancient semi-natural forest in the area. The giant mature oaks, rare mosses and liverworts, and nesting pied flycatchers and redstarts are in the care of the Woodland Trust, who own and manage this part of the valley. Snow Falls is one of the last spectacular diversions on view, before the path passes through an old limestone quarry and back into Ingleton.

Find out more about rambles in the Yorkshire Dales region in our comprehensive guide: