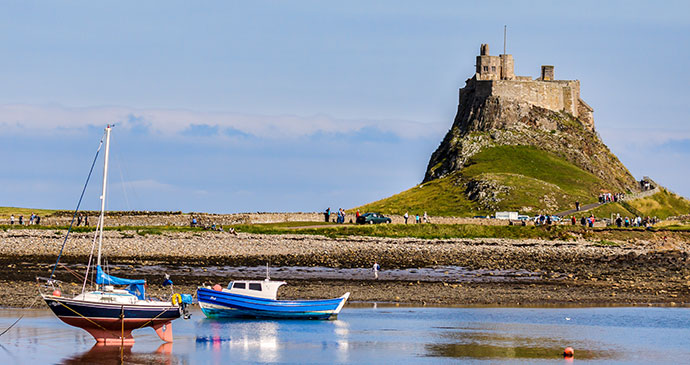 Most of north Northumberland’s coastal villages have been strongly shaped by fishing. Traditionally this was carried out from ‘cobles’, small open wooden boats launched from the beach. The fishing year was divided into the winter season, when long lines were used to catch cod and haddock, and summer, when herring were caught using drift nets. All the family was involved: women sold fish inland and, with their children, gathered mussels and limpets to bait the 1,400 hooks of each line.

Herring became a major industry from the early 19th century, and villages such as Seahouses prospered. In summer the men fished at night, and women worked in teams, gutting and packing herring into barrels for export, or smoking them as ‘kippers’. Although herring are no longer caught locally, Craster and Seahouses still have active smokehouses. In Seahouses the remains of several 19th-century herring yards can be seen, now converted into cottages. Walk along South Street looking for blocked-off ‘bowly-holes’ in the walls, where cartloads of herring were shovelled into troughs for gutting. Nearby, the gateway of Chapel Row is marked by grooves made by generations of fisherwomen sharpening their limpetpicking tools on their way to the rocks.

On Lindisfarne, old upturned herring drifters are used as sheds, and on Harbour Road at Beadnell two tarry fishermen’s huts, now disused, mark the Haven where cobles were launched. Near them, beside the footpath to the sea, stand the remains of a row of 18th-century ‘bark-pots’. These square structures consisted of a hearth, chimney and large metal tank, and were used to boil nets, ropes and sails in a tannin-rich liquid to preserve them. This seashore is full of hidden clues to its past, such as mussel-beds, lobster ponds and rectangular troughs called ‘bratt holes’, only visible at low tide, where fish were stored for live export in sailing sloops to London.

Today, fishing on this coast has greatly diminished. Where it still exists, it is mostly confined to catching crabs and lobsters. But look out for cobles still working traditional summer salmon nets in Boulmer Haven.