We’re delighted to welcome Amy Dickman, National Geographic Explorer, and the founder of Tanzania’s Ruaha Carnivore project, to the Big Cat Festival! She’ll be educating us on Big Cat Conservation in Tanzania and Beyond, and asking the thought-provoking question: Do animal lovers pose a bigger threat to lions than trophy hunters? 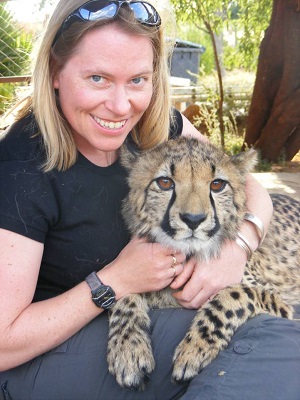 Amy is the Kaplan Senior Research Fellow in Felid Conservation at Oxford University, and has 20 years experience working on large carnivores in Africa, specialising in human-carnivore conflict. She has an MSc from Oxford University and a PhD from University College London, and has published over 70 scientific papers and book chapters on large carnivore ecology and conservation. She is a member of the IUCN Cat Specialist Group, the Human-Wildlife Conflict Collaboration, the African Lion Working Group, the IUCN Human-Wildlife Conflict Task Force, and is a National Geographic Explorer. She has received multiple awards for her work, including the Rabinowitz-Kaplan Prize for the Next Generation in Wild Cat Conservation, the St Louis Zoo Conservation Award and the Cincinnati Zoo Wildlife Conservation Award.

Amy established the Ruaha Carnivore Project (www.ruahacarnivoreproject.com), based in southern Tanzania, in 2009, and still directs it today. The Ruaha landscape is one of the most important areas in the world for lions, leopards and cheetahs, but has been largely ignored by researchers, making it hard to develop conservation and management plans. In addition, it has the highest rate of lion killing documented in East Africa, as lions and other carnivores impose high costs on poverty-stricken local people. Amy and her Tanzanian team are researching the ecology of these vital populations, and working to reduce the pressing threat of human-carnivore conflict in this critical area. The project focuses upon reducing carnivore attacks, providing local communities with real benefits from carnivore presence, focusing particularly on improving local schools, clinics and access to veterinary medicine. It has been an extremely challenging endeavour, given the remote location and the initial hostility of the Barabaig, who are the secretive and little-known tribe responsible for most lion-killing. However, the team has made huge progress: since 2011 in the core study area, carnivore attacks on stocks have been reduced by over 60%, people are recognising real benefits from wildlife presence for the first time, and most importantly, lion killings have been reduced by over 80%. The aim now is to continue and expand this work both around Ruaha and beyond, to generate long-term benefits both for carnivores and local communities.

You’ve been involved with Big Cat conservation for over 20 years now – what led you to the Ruaha Carnivore Project?

I have been passionate about big cats for as long as I can remember, and my childhood dream was to study big cats in the Serengeti. However, once I made it out to Africa, I realised that there was a huge need to work outside Parks and with local communities in order to help secure big cat populations long-term. I was actually sent to Ruaha from the Serengeti by my PhD supervisor, Sarah Durant, and was a bit bitter about it initially, as I had never heard of it! Once I got there, though, I fell in love with the area – it is an incredible, vast, wild landscape, and could see why she sent me, as there was a huge local need for conservation action.  My PhD revealed intense human-carnivore conflict around Ruaha, so establishing the Project and trying to reduce that conflict and killing was the obvious next step.

Your breakout session is called Do animal lovers pose a bigger threat to lions than trophy hunters? Is this being provocative, or do you think there is some truth to it?

It is certainly intended to be provocative, to challenge people to think about why they hold certain beliefs, and whether very well-intentioned but poorly considered actions risk having unforeseen negative impacts. I think that reactionary and superficial ‘solutions’ do risk posing a threat to wildlife, so I am keen here to encourage people to think about conservation in a more comprehensive way, to look beyond the headlines to the underlying issues, and to recognise that these are complex issues which are rarely solved using one simple approach.

Do you have a favourite moment from your work with lions?

My favourite moment – terrifying as it was – was on my very first night in the bush in Tanzania. I was in a tiny tent when a huge male lion came out of the bush, walked around my tent sniffing it, and then slumped down and went to sleep on me. It was heart-stoppingly scary, but at the same time was such an incredible and intimate experience with this amazing big cat.