Our headline speaker for this year’s festival is writer, broadcaster and naturalist Chris Packham, who will be asking the important question – is there still space for large carnivores on earth? And if so, for how much longer? 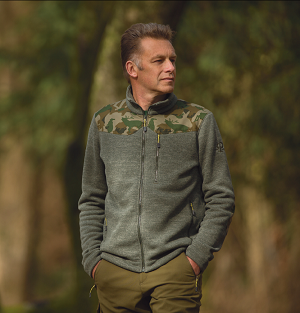 Chris Packham is one of our top television naturalists and an award-winning conservationist, photographer and author. He is involved in the work of many charities, in the role of president, vice-president, patron or supporter. In 2010, he was awarded the Dilys Breese BTO medal for ‘his outstanding work in promoting science to new audiences’.

From the moment he could crawl he was fascinated by wildlife and as he grew so too did his menagerie and knowledge. As a young scientist, he studied kestrels, shrews and badgers, both in his teens and undergraduate days at the zoology department of Southampton University. At this time, his passion for music was shaped by punk rock, speaking as it did to the rebel in him with its ‘DIY ethos and determination to never take no for an answer’.

His TV career began with the award-winning Really Wild Show. His more recent BBC series include Inside the Animal Mind, World’s Weirdest Events, The Burrowers and the critically acclaimed global series Secrets of our Living Planet. He is co-presenter of Springwatch, Autumnwatch and Winterwatch for the BBC.

Chris has long held a passion for Big Cats, and he looks forward to sharing his expertise and experience on the stage of the Ondaatje theatre, where he’ll be giving both the Key Note speech and judging the Big Cat Festival Photography Competition with his good friend Paul Goldstein.

We’re really looking forward to meeting you at the Big Cat Festival – can you pinpoint a moment in your life that triggered your interest in big cats?

Meeting a Tiger aged 11 undoubtedly changed my life. Face to face through zoo glass – being able to study nature’s greatest masterpiece in extreme close up generated a surge of awe that still exists today.

You’ve said: “I doubt whether there is a single safe enclave on Earth for the tiger. Maybe we should spend all that vast sum of charitable cash to send the last few to the Moon.” Are tigers (and other cats) really safer in outer space than on Earth?

The vast majority of our cats species, big and small, are in deep trouble for a wide range of reason , the worst of which for me is ineffective conservation. We have lots of answers, but we are not fixing the problems.

Do you have a favourite moment spent in the company of cats?

Every time I meet my friend Aysha, a hand reared ex-circus Tiger who lives at the Wildheart Trust on the Isle of Wight. In captivity, not playing any valid ecological role, not a carrier of endangered genes, but a constant reminder of the urgent need to protect her precious wild counterparts