One of Kasanka’s highlights is the magnificent tree-hide, perched high in a red mahogany tree overlooking the Kapabi Swamp. Most come here to spot sitatunga, but if you climb up on a late November afternoon, around the time the rains are beginning, then you’ll also witness one of Africa’s strangest wildlife spectacles. Between about 18.00 and 18.30, up to ten million straw-coloured fruit bats will take to the air above you. These large, fruit-eating bats have wingspans up to about a metre. They start by circling overhead like a vast, slow whirlwind. Gradually, individuals and groups break off and spread out over the forest in search of wild fruits. For an amazing 20–30 minutes the sky is filled, as far as you can see, with squadron upon squadron of bats, heading off into the twilight. 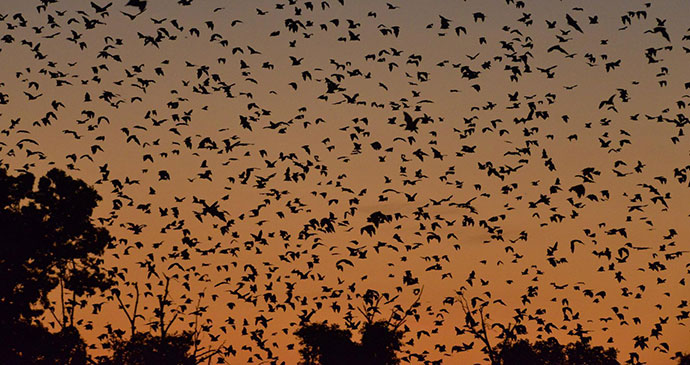 ‘They come to roost in the evergreen swamp forest, near the Musola River,’ Edmund said, gazing down through the canopy. ‘It’s very unusual vegetation for Zambia – only found near rivers. Tremendously fragile and easily destroyed,’ he added. ‘During the day the bats occupy just a small area. They hang off the mushitu trees in such numbers that they pull off the branches, leaving just the woody skeletons to hang on to. This lets light on to the forest floor which, together with the inordinate amount of fertiliser that they drop, promotes very rich undergrowth. Imagine, eight million bats, weighing about 350g each … that’s 2,800 tons of animals.’ Edmund had clearly done his arithmetic before. ‘The equivalent of a thousand elephants, hanging around in perhaps one hectare of forest, suspended from the trees,’ he grinned. 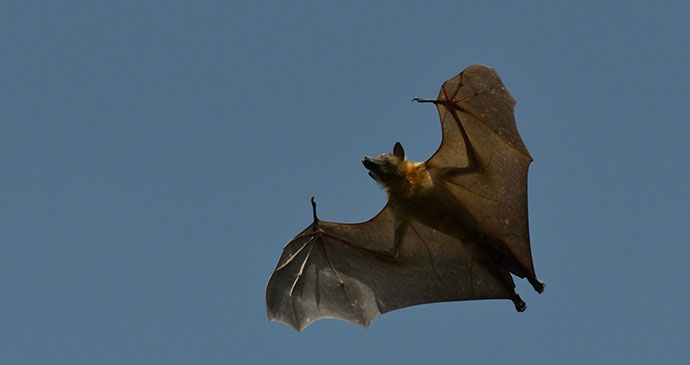 Visiting this colony isn’t for the faint-hearted, even during the day. Large crocodiles wander under the trees, far from the nearest water, scavenging for dead bats – along with vultures, gymnogenes and a host of other smaller predators. All of which provided further reasons why that high tree-hide was such a wonderful place to be.

Edited from an article by the author that first appeared in Travel Africa, and reproduced by kind permission.