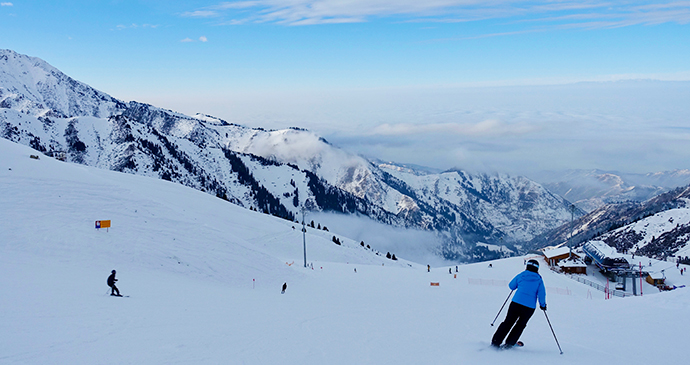 The origins of the resort go back to Soviet times when it was developed into a centre for downhill skiing – indeed, the first Soviet downhill skiing championships were held here in 1950. The facilities have been considerably expanded over the last few years, and improvements include the construction of a 4.5km gondola from Medeu to Shymbulak, brand-new chairlifts and the opening of a smattering of new restaurants. There are plenty of snow cannons and trails are groomed every evening before the opening of the chairlifts. Morning skiing is particularly enjoyable.

There is a sequence of two chairlifts. Combi-1 (1,800m) from the station where Shymbulak Resort Hotel lies, up to medium station with S.N.e.G. Hotel, from where Combi-2 (1,200m) rises up to the Talgar Pass (3,163m), the highest point in the resort and skiing. 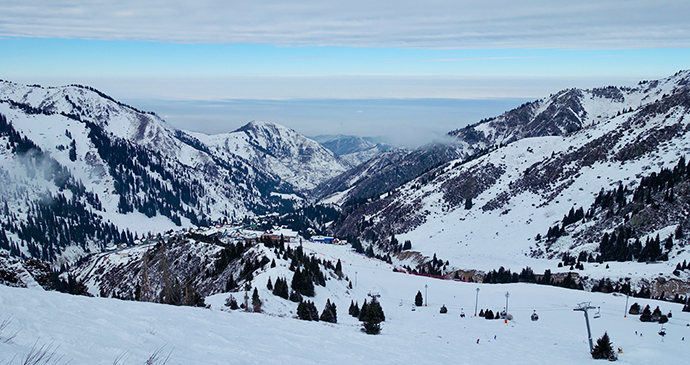 The resort has 22km of ski runs © Maria Oleynik

Shymbulak has 18 ski trails with a total length of 22km and a 1,020m variance in altitude. Most trails are medium complexity, making it a good place for beginners. The resort is also a popular destination for those who enjoy skiing off piste on powder snow. The mountain landscape around Shymbulak is gentle, in contrast to the endless pointy spikes of the Caucasus range. Indeed, it is this almost balmy tranquillity that makes skiing at Shymbulak so pleasant. On a sunny day the entire city of Almaty and beyond reveals itself when looking down from the altitude of the slopes; and on a cloudy day Kok-Tobe TV Tower finds its way through the thick pillow of clouds as the only indication of the city lying at the foothills.

Besides skiing, the resort is also conveniently close to the famous Medeu Skating Ring, recently renovated in time for the 2011 Asian Winter Games. To get here, take the EcoBus (T400) or walk along the serpentine road and take the Medeu–Gorelnik tourist path past the dam before a rather steep Baspaldak flight of stairs, comprising 842 steps.

How to get there 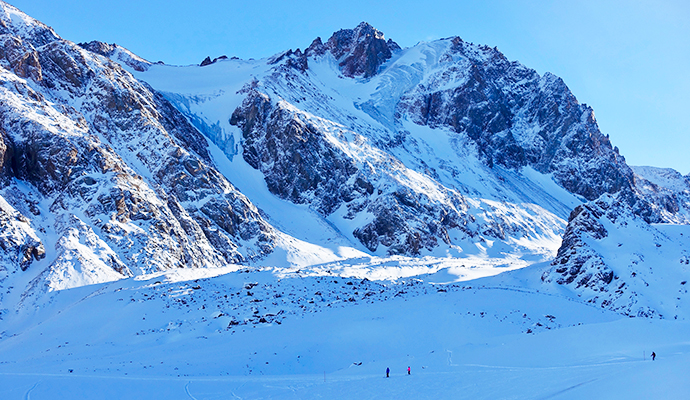 Shymbulak is just a short drive from Almaty © Maria Oleynik

Kazakhstan’s flag carrier, Air Astana operates regular flights from London, Paris and Frankfurt to Almaty and offers between 20kg and 30kg of free checked in luggage on economy and business class fares respectively. If the ski or snowboard equipment is within this limit, no extra charges apply irrespective of the size. Excess luggage is, however, subject to higher fees. A taxi transfer to Shymbulak costs T10,000 – this is your best option as getting there by public transport is inconvenient and will end up costing roughly the same.

Where to stay and eat

There are only two hotels in the resort: the Shymbulak and the S.N.e.G. The numerous luxurious villas dotting the slopes are private and only a couple, including the Namaste Shalle located midway at the serpentine road to the resort, are available to rent out at exorbitant rates. Day tripping from Almaty is a direct possibility, staying at one of the hotels along Dostyk Avenue and taking bus no 12 or a taxi to Medeu whenever you wish to ski.

Want to learn more about skiing in Kazakhstan? Check out our comprehensive guide: