Travelling alone as a woman is lonely and scary, right? An experience to endure rather than enjoy? Not a bit of it. Three of the UK’s leading female travellers talk to us about why they love to travel solo, and how they’ve found being a woman can actually help to overcome challenges on the road.

Editor-at-Large of Wanderlust, the UK’s best adventure travel magazine, Phoebe Smith (PS) is a travel writer, broadcaster and presenter specialising in adventure, travel, camping, gear and the outdoors. In her latest endeavour, The Wilderness Cookbook, she shares her top tips for wilderness cooking and shows that not all camping recipes have to rely on pre-packed ingredients.

Lizzie Carr (LC) is a natural-born adventurer, blogger and environmentalist. In 2016, she became the first person in history to paddleboard the length of England’s waterways solo and unsupported, and a year later she completed her next challenge – becoming the first woman to paddleboard across the English Channel. Since then, Lizzie has released her first book, Paddling Britain, which showcases 50 of the best paddling routes in the UK. She is also the founder of Planet Patrol, a nationwide campaign to rid the UK’s waterways of plastic pollution.

World Bike Girl Ishbel Holmes (IH) is a British-Iranian daredevil adventurer who is scared of spiders. In 2014, she set off to cycle the world and has so far pedalled across 16 countries in Europe and South America. Ishbel travels with a trailer that she uses to rescue animals as she goes, and her epic journey took an unexpected turn when she rescued and formed a lasting bond with a street dog named Lucy. She has since penned this heart-rending tale in her first book, Me, My Bike, and a Street Dog Named Lucy.

What is your favourite solo travel experience?

PS: I have two. The first time I went wild camping by myself, around 10 years ago now – despite everyone telling me it was too dangerous for me to do it alone. They said everything would go wrong, and of course some things did, but doing it and not only surviving, but thriving, turned my whole life around. I felt freer, more confident and like I could take on the world. The second one was last year when I walked the Arctic Circle Trail in Greenland by myself. It was eight days with no escape routes, no way of resupplying on the way and only myself to rely on. When I arrived in Kangerlussuaq to start, both locals and tourists said I was crazy to do it alone especially with no sat phone or support. I’m not going to lie – I had a little wobble. But a wise friend messaged me saying: “I’d be terrified but you are made of much stronger stuff than me, so go and have fun and we’ll speak when you finish”. With that, I headed out into the wilderness and didn’t doubt myself again.

LC: Probably when I crossed the border from Vietnam into southwest China. It was quite intimidating, but that just made it feel more adventurous. You really do have such a language barrier – no one knew a word of English, and I certainly didn’t speak Chinese, so trying to navigate my way across the border meant relying a lot on improvisation. At the time it was quite daunting and scary, and obviously I was completely alone, but on reflection I actually got a lot out of it. I learnt that you really need to trust your instincts and the goodness of people around you. I met some incredible characters and there was a lot of good will around me – the kindness of strangers really struck me on that journey.

IH: For me it was cycling across Bolivia. The highlights? Cycling at 5,000m over the Andes, crossing the largest salt flat in the world, following Che Guevara’s final weeks of activity to his place of execution, catching the beginning of the Pantanal into Brazil and, of course, hanging out with the indigenous people. 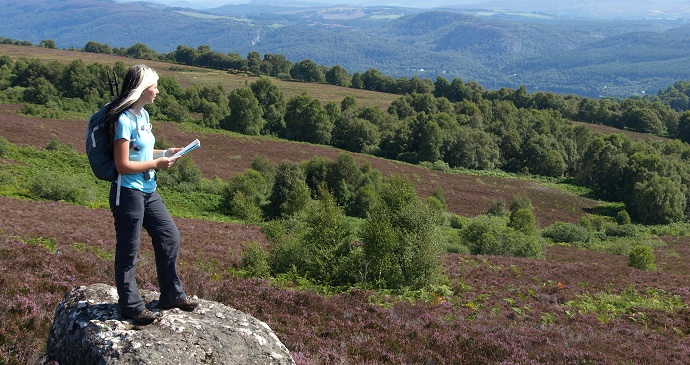 Phoebe Smith went wild camping despite everyone telling her it was too dangerous, and she’s never looked back. © Phoebe Smith

Do you ever find there are obstacles put in place for you as a female traveller? How do you overcome these?

PS: Not physical obstacles, no. The reason I am so passionate about being in the outdoors when I travel is because it’s the ultimate leveller – it rains on everyone no matter whether man or woman! But I think mentally, we do tend to doubt ourselves a fair bit and so do others (such as family or friends), so they put that doubt on to us and we tend to absorb it. But that can of course apply to men, too. The main problem is there are simply not enough women doing adventurous things represented on TV and in the media. There’s so many of us doing them but we rarely see them – how can young girls want to be something they can’t see? We need to address this.

LC: I don’t think there are additional obstacles put in place, but I do think there’s an extra level of vigilance you need as a female solo traveller. I’ve never encountered any problems, and I encourage females to travel alone, but of course there’s an element of needing to be sensible with that as well. You need to be aware, but I’d never let that hold me back, simply because there’s so much personal growth and understanding that can come from it.

IH: I find it a tremendous advantage being a solo female traveller. It costs less to cycle the world as a solo woman than a solo man. For example, a woman is not seen as a potential threat, and is therefore invited into more homes to be fed and rest up than men. In other countries, women are perceived as less capable to endure hardship and discomfort, which works well for the solo bicycle tourer as if it’s raining you are always offered a home. In difficult situations, for example mix ups with visa exit dates, a woman can cry and the results swing in her favour… a man crying doesn’t have same effect. Of course, this is all completely wrong and I don’t condone it at all, but it’s the reality for solo female travellers. 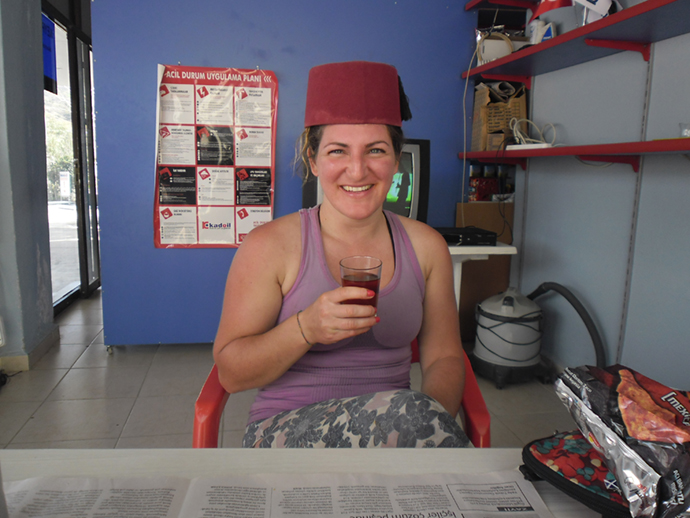 Women are seen as less of a potential threat when travelling solo. Ishbel was invited into the house of a Turkish woman on her travels and was given a place to stay and clothes to wear. © Ishbel Holmes

How do you find people’s perceptions of women in travel? Have you ever found you’ve been treated differently than the men around you?

PS: I think it really depends on the people – you certainly couldn’t generalise to that extent! I do think travel is one of the best things anyone can do, to not only learn about the world but learn about yourself, too. I think the main difference in the way I’ve been treated as a woman is that I often get access to places and social situations a man couldn’t, so often it can help. I’ve also experienced extreme kindness and often as a woman travelling alone I’ve found that it brings out the best in people that they want to look after me – in fact, the problem can actually be getting time and space to be alone!

LC: I feel really lucky to be a woman in travel, and particularly in adventure! There are so many more doors opened to me because there aren’t as many women doing it, and because it’s rare it’s being championed and supported in a way that it hasn’t ever been before. Personally, I think it’s created more opportunities than it’s hindered.

IH: Firstly, I’m asked my age. Then, as they peer behind me, I’m asked where my children are. Then I’m asked with incredulous eyes if I am married? My answer to all three sends shock waves throughout whole markets and villages as word spreads like wild fire. Then, everyone tries to marry me off to their sons! I do find that I am treated differently in countries that do not see women as equal to men. For everyday life this would be horrendous for me but as a solo female traveller on a tight budget it works in my favour.

If you could give one piece of advice to women who want to travel, what would it be?

PS: The exact same advice I’d give to men – the only thing stopping you, is you.

LC: Do something that makes you commit, invest in it in some way – buy the ticket, get the piece of kit, tell someone about it – so that you then do it. It’s so easy to talk yourself out of solo travel, because you can convince yourself it’s scary or too much, but there’s never a time I’ve regretted taking an adventure of my own.

IH: If you truly want to experience a country and its people and culture, the best way to achieve this is by solo travel. Plan your first solo trip. Go. Then you’ll know why we are all doing it. 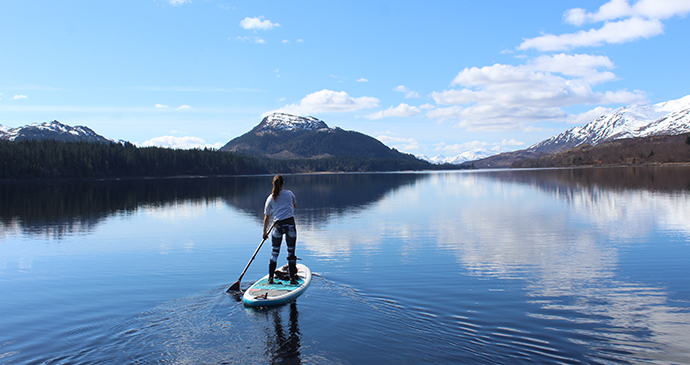 Lizzie Carr looked up to the Guides in her Mum’s group when she was growing up, and this inspired her to get outdoors. © Lizzie Carr

You’re all very inspirational women. Was there anyone in particular you looked up to in the industry when you were younger?

PS: As I said there weren’t (and still aren’t) too many women out there in the public eye to look up to – I remember being in primary school and Alison Hargreaves being absolutely lambasted in the press for daring to be a mountaineer as she was a mother, with no similar claims laid at the door of her male counterparts who were fathers. But thankfully I’ve been lucky enough to have two very strong women in my life. My granny, who fought in the war overseas and, when she lost my granddad, went travelling the world alone sending me postcards from wherever she went; and my mum, who taught me to never let anyone tell you that you can’t go after your dreams. They are both no longer with us but wherever I travel I like to think they are both still guiding me and all I do.

LC: Not in the industry, but my mum. She was a guide leader, and from a very young age I was dragged around on Girl Guide trips, becoming immersed in camping, outdoor activities and sports. I have a lot to thank her for, because it meant that at a time when I was young and impressionable there were all these girls within the Guides to look up to, all very adventurous, and that left a big impression on me growing up.

IH: When I was growing up the internet and social media didn’t exist the way it does now, so no, I wasn’t even aware there was anyone I could look up to! This is a shame, because I’m the sort of person that if I see someone else doing something, I immediately think I can do it too. Perhaps if I’d had people to look up to I would have started adventure cycling a lot sooner than I did!

Want to read more about these inspiring adventures? Get a 10% discount in our shop: