All the beautiful Italian cities have a certain something that sets them apart, an image that graciously provides a perfect book cover or travel poster. Venice is boats and canals, Siena the lovely Campo and the tower of the Palazzo Pubblico. See the Egg Castle and Santa Lucia, with Vesuvius in the background, and you see Naples.

All the beautiful cities – except perhaps one. At first sight of Bologna, especially if you fly here, your first thought might be ‘What is it?’ It’s flat and brown like a pancake, or a day-old omelette, with two toothpicks sticking out of the centre at rakish angles. 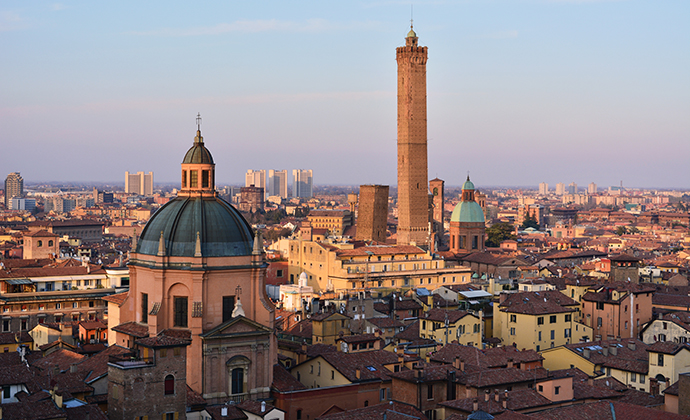 Bologna is brown all right, but it’s made of nothing but billions and billions of bricks © Gaia-Ciolli, Shutterstock

Once you’re in it, the image still might not be coming into focus. It’s brown all right, made of nothing but billions and billions of bricks. But it’s hard to see anything of Bologna at all unless you stand in traffic, because almost every street in it is lined with elegant arcades under the buildings – altogether, over 40km of them. Of all the cities in the world, this is the one that cares the most about keeping you out of the rain.

It’s a world in itself, this pianeta porticata – ‘arcaded planet’, as the Bolognesi call their peculiar city. They like to be different, the Bolognesi. Before long someone will trot out the great triple cliché: Bologna is La Dotta (‘the learned’), La Rossa (‘the red’) and La Grassa (‘the fat’). They’ll laughingly plead guilty to all three. La Dotta is home to Europe’s oldest university, and 80,000 students help keep the historic centre a very lively place. La Rossa for a long time was Italy’s bastion of intelligent, pragmatic Communist rule, which made the Emilia-Romagna region a paradoxical economic showcase. Communism may be dead, but Bologna is still the heart of Italian left-wing politics today.

And La Grassa shows that even reds and academics understand that living well is the best revenge, for this is the acknowledged capital of Italian food.

Fat, red and smart all come together in the city’s centre, Piazza Maggiore, where lefties remonstrate and demonstrate in the looming shadow of the Basilica San Petronio, one of Italy’s most unsightly churches. The Pope wouldn’t let them build San Petronio’s facade back in 1565, even though they had the money ready, and the Bolognesi never got around to finishing it; it’s been a rugged brick cliff ever since. Three centuries of rotten papal rule can explain a lot about Bologna’s politics, and its contrary character.

For further evidence of that, just off the Piazza you can inspect the city’s truly eccentric monument and symbol – the toothpicks in the omelette. The only tall buildings in this city are medieval towers, and these two crazily listing brick giants are the biggest. The 318ft Torre degli Asinelli is the champ, and you can climb it for the view – it’s only 498 steps. The shorter Torre Garisenda, leaning in the opposite direction, had to be chopped short centuries ago lest it topple over. Dante wrote about it in the Inferno, and mentioned the famous optical illusion; look up at the tower when the clouds are passing by from the opposite direction, and it will seem to be falling down on top of you. It scared Dante, and it will probably frighten you too. 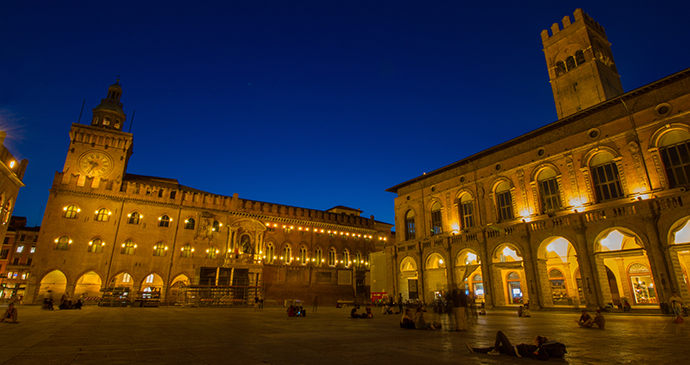 Fat, red and smart all come together in the city’s main square, Piazza Maggiore © Illpax, Shutterstock

All the little crooked streets between the towers and Piazza Maggiore fall under the rule of La Grassa. This has been the market area for a millennium or two, and those streets are lined with some of the finest food shops in Italy. It’s all here: the celebrated tortellini, modelled after the navel of Venus, along with the cappellini and the other filled pasta creations, the best of the Parmigiano and other cheeses, Modena’s balsamic vinegar and Emilia-Romagna’s excellent (and much underrated) wines: Colli Piacentini, Albana di Romagna, Colli di Imola. Along with the tortellini, pride of place goes to the region’s salumi, some of the finest charcuterie on the planet. There’s Parma hams and culatello, the best of the best, as well as delights little-known outside Emilia-Romagna such as gourmet lardo, garlicky ciavar, and salama da sugo that you eat with a spoon – not to mention the mighty mortadelle a foot and a half in diameter, set up on groaning trestles to be sliced thin as paper.

It assaults the senses, as it provides an education in what really matters here – the ingredients. There’s little fancy about Emilia-Romagna cooking, and it seldom changes. Why should it change? the Bolognesi ask; it’s perfect as it is. Theirs is a cuisine both refined and democratic, with its feet in the muck and its head in the stars; the small farmers doing things the old-fashioned way mean just as much to it as the famous chefs and venerable culinary academies. (Bologna is full of academies; the one dedicated to tagliatelle has determined that the definitive width for the pasta is 9mm, or exactly 1/1270th of the height of the Torre Garisenda.)

People who have dined here are always amazed to hear that the entire city of Bologna can show only one single Michelin star. That’s more a reflection on the tire company than on Bologna. Star cuisine is often more about painfully correct waiters and smudgy art on the walls, exotic ingredients, wild innovation and showmanship. All these things are chilling to the Bolognese soul. Restaurants here may offer few surprises, but the standard of cooking is as high as anywhere on earth –and compared to other big European cities, they are surprisingly cheap.

Besides the food, a big part of Bologna’s attraction is the relative peace and quiet. In an age when the best-known art towns are up to their ears in gawking cheap-flight tourists who couldn’t tell a baldacchino from a Borsalino, Bologna is a place where you can still breathe. The crowds that are making Florence and Venice uninhabitable don’t know about Bologna and its modest charms, and it isn’t likely you’ll have to queue up for a museum even in August.

And La Dotta is packed with museums. The city’s traditions in art have a treasure house in the Pinacoteca Nazionale: exceptional medieval works, and the definitive collection from the late Renaissance and Baroque days when the city’s artists held their greatest renown, with Guido Reni and the Carraccis. Near San Petronio, the Museo Civico Archeologico is there with some unique and mysterious ancient art to remind you that Bologna started out as a city of the Etruscans.

The University Museums, really a score of small museums at different locations, hold collections of everything under the sun: models of old warships and fortifications, astronomical instruments, botanical gardens, as well as bizarre and seldom-visited rooms of dog and cat skeletons, human and animal deformities and Baroque-era wax anatomical models for medical students. 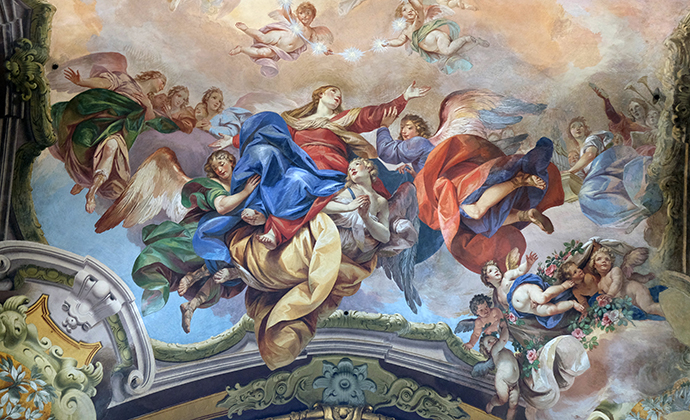 Bologna is brimming with churches boasting gorgeous frescoes, such as here at the Basilica di San Petronio © Zvonimir Atletic, Shutterstock

There are plenty of wonderful medieval frescoes in Bologna’s churches, and imposing palaces on streets that have changed little in centuries, but the things you’ll remember best will always come from Bologna’s taste for the eccentric. You can visit Jerusalem here; the early medieval complex of Santo Stefano, built over a Roman temple of Isis, contains reproductions of that city’s seven holy sights, so that lazy burghers could make a pilgrimage to the Holy Land without leaving home. For the not-so-lazy, there’s the longest of all Bologna’s arcades, the ‘Porticata’ – 666 arches, 4km long, running right out of the city and up into the hills to the Sanctuary of San Luca, with a shrine to the Virgin Mary and views over the city.

It’s a fascinating walk, but pack a picnic; when you get to the top you’ll be in the only place in all of La Grassa where there’s nothing to eat.

This piece was originally published in Dream of Italy