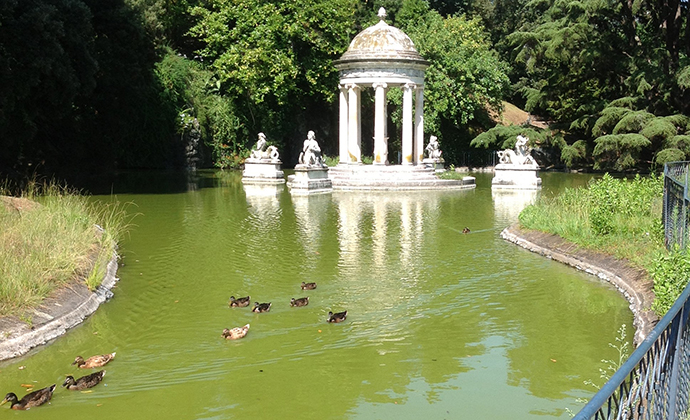 What do you do for an afternoon’s entertainment in Liguria, when you have written a guide book to the place? Take the kids to see your most interesting finds, is the answer, as these are invariably the places they expected to be boring and decided to have a sleep-in instead of keeping their mother company.

So we’re off to see a little known museum in the scruffy suburbs of western Genoa, once dubbed the Manchester of Italy. The Palazzo Durazzo Palavicini, in Pegli is home to a surprisingly good archaeological museum, the Museo di Archeologia Ligure (Via Pallavicini 11; 010 6981048). I’ve brought my youngsters here to see the oldest skeleton ever found in Italy.

My twins are fourteen. This young man was about their age when he died 24,000 years ago. He was found further along the coast in Arene Candide near Finale on the western stretch of the Italian Riviera. His skull is decorated with a hat of shells and he was undoubtedly important as he was buried with an array of treasures. As a result he’s known as Il Principe, the Prince. He died from a huge wound that destroyed the left side of his jaw and that is masked with yellow ochre paint.

I give the kids the spiel that the fact he is lying in a museum which is rarely visited is an indication of how decentralised Italy is. “In Britain, he would be in the British Museum not stuck out in the provinces.” My daughter looks sceptical, “How can they miss a trick like that? I would at least put him in a museum in Genoa. Does anybody know he’s here?” “It’s too hot to bother,” answers her brother. There’s no air-conditioning in this very old-fashioned museum and it 35°C outside.

We rattle on round the museum past the Greek pots and Roman vases that were found when modern Genoa was built in the 19th century. “You have to see the mummy, who was dropped by the embalmers and ended up with a dislocated shoulder,” I add with the authority of a guidebook writer.

That section of this tiny museum is closed. The room looks empty when I peep round the door. A cold chill creeps through me. Did I make a mistake? Was it just a temporary exhibit? Will anyone notice? But before I have time to think, my husband, a life-long reporter, is in deep conversation with the woman at the ticket desk and has discovered that the museum and the surrounding gardens are undergoing a million Euro make over. Soon the fabulous Egyptian collection will have a swanky floor all to itself. “Didn’t you see the vast notice by the door?” he asks. “Italy is clearly not as broke as it makes out.”

Then it’s on to the gardens that were laid out by Galeazzo Alessi. I scuttle past the huge notice announcing the makeover. We pass through an ingenious folly. On one side it looks like a classic Roman triumphal arch and on the other like a rustic cottage. The path is cordoned off but that doesn’t deter my husband. Before I know it, he and the kids have hopped over the barrier and discovered the beautiful artificial lake. They are Londoners so the fact that the motorway now dives into a tunnel just underneath the park seems to go unnoticed, they are used to the hum of traffic, so I say nothing to dampen their enthusiasm.

The lake may be green but it’s teeming with wildlife. There are dozens of terrapins, ducks and fish swimming about. The phones are out in seconds as they take endless shots of terrapins. My husband always manages to walk five metres ahead of me and by the time I make it to the ticket office by the exit, he is once again already in deep conversation with the lady behind the desk. 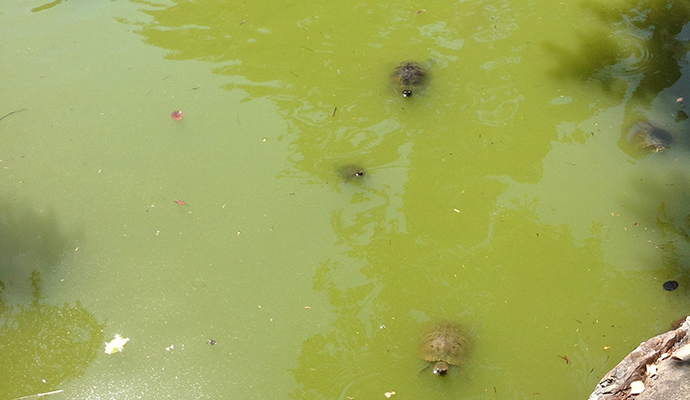 There are hundreds of tartarughe, as terrapins are called in Italian in the lake she says. “People sneak them in, in their handbags, when they get too large to keep at home and put them in the pond,” she says waving her hands in the air. “They make a real mess. It’s the reason the pond is so dirty. But what can we do?” Will they survive the million Euro makeover? “Of course,” she adds with a big smile.

Chatting with our neighbour on the steps later in the evening, we tell him the story of our day. “I did the same thing,” he confesses. “You can’t keep tartarughe in an apartment. They like very hot weather or freezing temperatures when they sleep under the water.”

Is this just a Ligurian phenomenon? It appears the tartarughe problem is international. In the Lake District they are chomping ducks feet off as they swim about.

For more on things to do in Liguria, take a look at our award-winning Liguria guide, the only standalone guide to the region.