Minarets in the Mountains

A Journey into Muslim Europe

Travel writing about Muslim Europe. A journey around Eastern Europe and the Western Balkans, home to the largest indigenous Muslim population in Europe, following the footsteps of Evliya Celebi through Serbia, Bosnia, Albania, North Macedonia, Kosovo, Montenegro. A book that begins to decolonise European history. 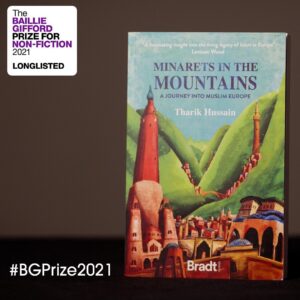 Longlisted for the Baillie Gifford Prize for Non-Fiction 2021

A magical, eye-opening account of a journey into a Europe that rarely makes the news and is in danger of being erased altogether. Another Europe. A Europe few people believe exists and many wish didn’t. Muslim Europe. Longlisted for the Baillie Gifford Prize 2021.

Londoner Tharik Hussain sets off with his wife and young daughters around the Western Balkans, home to the largest indigenous Muslim population in Europe, and explores the regions of Eastern Europe where Islam has shaped places and people for more than half a millennium. Encountering blonde-haired, blue-eyed Muslims, visiting mystical Islamic lodges clinging to the side of mountains, and praying in mosques older than the Sistine Chapel, he paints a picture of a hidden Muslim Europe, a vibrant place with a breathtaking history, spellbinding culture and unique identity.

Minarets in The Mountains, the first English travel narrative by a Muslim writer on this subject, also explores the historical roots of European Islamophobia. Tharik and his family learn lessons about themselves and their own identity as Britons, Europeans and Muslims. Following in the footsteps of renowned Ottoman traveller Evliya Celebi, they remind us that Europe is as Muslim as it is Christian, Jewish or pagan.

Like William Dalrymple’s In Xanadu, this is a vivid reimagining of a region’s cultural heritage, unveiling forgotten Muslim communities, empires and their rulers; and like Kapka Kassabova’s Border, it is a quest that forces us to consider what makes up our own identities, and more importantly, who decides?

Tharik Hussain is an author, travel writer and journalist who specialises on Muslim heritage and culture, especially across the western hemisphere. Tharik’s previous work has often served to decolonise popular religious and cultural histories and narratives. He is the creator of Britain’s first Muslim heritage trails and has produced award-winning radio for the BBC on America’s earliest mosques and Muslim communities. Tharik has written about his travels exploring Muslim culture and heritage across the globe for many of the world’s leading media brands and is the author of several travel guides for Lonely Planet, including Saudi Arabia (shortlisted for a Travel Media Award), Bahrain and Thailand. He has been named one of the UK’s most inspiring British Bangladeshis and is a Fellow at the University of Groningen’s Centre for Religion and Heritage.

“‘How can we care about something we don’t even know is there?’ asks Tharik Hussain. Europe has long turned a blind eye or, worse, looked askance, at its own Islamic self – the Muslims of the Balkans. Tharik Hussain opens our eyes to this vivid, varied and still vital Muslim presence. His title is romantic, but not his vision: he ignores neither current sectarian tensions, nor histories scarred by violence and hatred. And yet he constantly reminds us of the long periods of tolerance and symbiosis, often forgotten in the din of war. This is a richly detailed travelogue by a humane and passionate pilgrim.”
Tim Mackintosh-Smith

“An unapologetic odyssey to unearth the hidden and unmistakable gems of Muslim Europe. a must-read.”
Muslim News

“A fascinating book.”
The Sunday Express

“Enjoyable and thought-provoking. a refreshing rediscovery of the Muslim history and communities of the Balkans.”
Jewish Times.

“A deep dive into the historical roots of European Islamophobia, and the places where Muslim Europe still exists make this one of the most compelling books for readers who wish to see the world through a wider lens.” Forbes

“A tour through the Balkans unearthing Islamic European history. I appreciated the depth of his research and the lightness of touch in his many fascinating encounters”
Johnny Pitts, New Statesman Books of the Year 2021

Part One: Bosnia and Herzegovina
An Ottoman City – Sarajevo
The Bridge Built by Barbarians – Mostar
Mystics and Mountains – Blagaj
The Bloody Bridge on the Drina – Visegrad

Part Six: Return to Bosnia and Herzegovina
The Effendi’s Library – Foca and Zenica
Coffee with Bosnian Kings – Vranduk and Travnik
Dumped for De Niro – Sarajevo
Back in ‘Jerusalem’ – Sarajevo
Remembrance in Sarajevo – Sarajevo