Khachkars, carved memorial stones, are an important, conspicuous and beautiful feature of Armenian decorative art. The word khachkar literally means ‘cross stone’. In quiet streets in central Yerevan it is possible to see even today the stone carvers at work, using traditional methods to create these endlessly varied monuments in a revival of this ancient tradition. The earliest khachkars date from the 9th and 10th centuries, a period when Armenia had gained effective independence from the Arab caliphate and separate Armenian kings each ruled their individual states. This flowering of Armenian craftsmanship under independence was paralleled in architecture: some of Armenia’s finest monasteries date from this period. 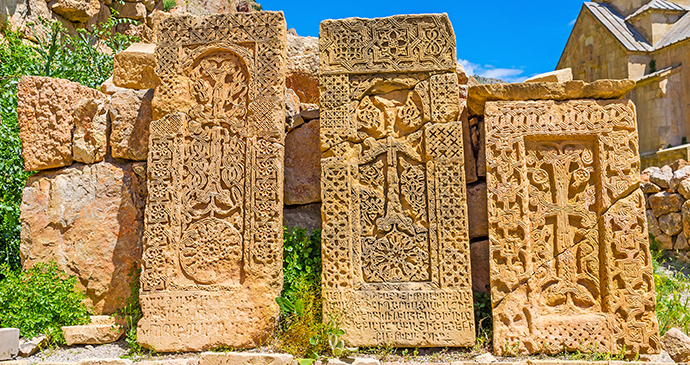 The earliest datable khachkar was erected at Garni by Queen Katranide, wife of King Ashot Bagratuni I, in 879 in mediation for her person. Securing the salvation of the soul was the most common reason for erecting khachkars but some were put up to commemorate military victories or the completion of churches, bridges, fountains and other constructions. Even unrequited love might be commemorated in this way. The dominant feature of the design is generally a cross, occasionally a crucifix, resting on a rosette or sun disc design, often with a stylised tree of life encompassing the lower vertical of the cross. The four limbs of the cross usually terminate in two triple-loops, perhaps a reference to the Trinity. The remainder is covered with complex patterns of leaves, bunches of grapes or abstract geometrical patterns. Occasionally the whole was surmounted by a cornice showing biblical characters or saints and there is sometimes an inscription recording when, by whom and for what reason the khachkar was erected. The absolute peak of khachkar design was probably between the 12th and 14th centuries. Amazingly elaborate and delicate patterns were created using the same elements of design. Depiction of the Crucifixion and Resurrection became more common and at this time some khachkars came to be erected as a spiritual protection against natural disasters. The supreme masterpieces include that at Geghard created by Timot and Mkhitar in 1213, the Holy Redeemer khachkar at Haghpat Monastery which was created by Vahram in 1273, and that at Goshavank created by Poghos in 1291. Some good examples have been transported to the History Museum of Armenia in Yerevan and the cathedral at Etchmiadzin. There can, however, be no substitute for seeing them where they were originally erected.

The Mongol invasion at the end of the 14th century led to a decline of the tradition and, although there was a revival in the 16th and 17th centuries, the artistic heights of the 14th were never regained. Some khachkars, often recording donations, are embedded in the walls of monasteries but most are free-standing. Armenia has over 40,000 surviving khachkars. An amazing  sight is the so-called field of khachkars at Noratus, the largest of several groupings in Armenia. This is an old graveyard with
900 khachkars marking graves and the endless variations of design make a visit there particularly rewarding. Examples at Noratus span the whole period from the 10th to the 17th century. Where khachkars are still in their original location, they face west and are best photographed in the afternoon. Since 2010, khachkars, their symbolism and craftsmanship are inscribed in the UNESCO list of Intangible Cultural Heritage.

Learn more about Armenia’s heritage in our comprehensive guide: