From birdwatching to five-star accommodation in a time warp, here are five of our favourite islands in England.

Lundy lies about ten miles north of Hartland Point in the entrance of the Bristol Channel where it meets the Atlantic. It is a granite island measuring three miles long and about half a mile wide. Just over two dozen people live there – all employees of the Landmark Trust which leases the island from its owner the National Trust. 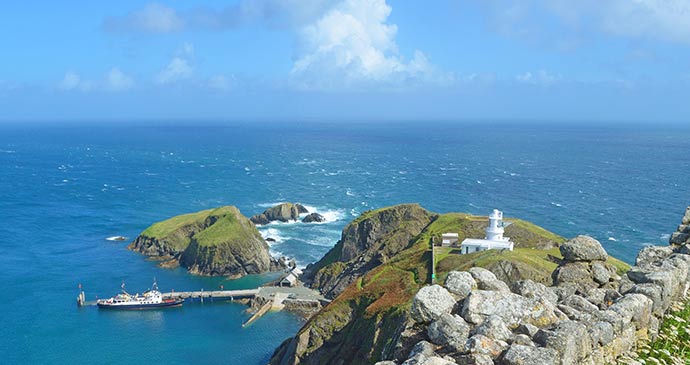 Until 1969 Lundy was in the private ownership of the Harman family and upon Albion Harman’s passing the future of the island looked bleak indeed. Previous owners had included the Heaven and Christie families, as well as the Sovereign, and it had also been in the lease of famous Devon names such as the Grenvilles. Lundy’s history is steeped in tales of enforced slaves living there, of plots against the king and of being a stronghold for pirates. In 1969 the National Trust acquired it after Sir Jack Hayward donated the asking price at auction; the island’s future was secure. The Landmark Trust took on a 60-year lease and the responsibility to repair buildings, manage the land and employ the staff.

Lundy inspires much interest, both nationally as well as further afield, enjoying, as it does, an unspoiled habitat (both terrestrial and marine) and a wealth of archaeology. It is now a Site of Special Scientific Interest (north of the Quarter Wall) and the first National Statutory Marine Reserve, with a No Take Zone. It is the only place in the UK where you can find all five British species of shallow-water cup coral. 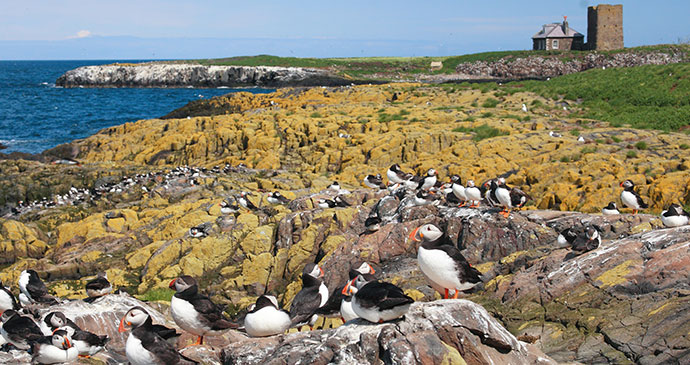 Everyone who has visited the Farne Islands will remember ducking and flinching from the dive-bombing arctic terns. A wave of the hands usually keeps the birds, which are ever so protective of their chicks running at your feet, from striking, but you might want to wear a hat just in case. From the moment you step ashore, you’ll see puffins crash-landing with beaks stuffed full of sand eels, terns wheeling in the sky or spearing fish from the sea, cormorants sitting proud on their castles of dried seaweed, and guillemots standing on rock stacks painted white with guano. There is no other wildlife experience quite like this anywhere else in Northumberland. But only for a few months of the year. Come mid August, the birds depart for open waters, abandoning their empty nests to the wind and sea. 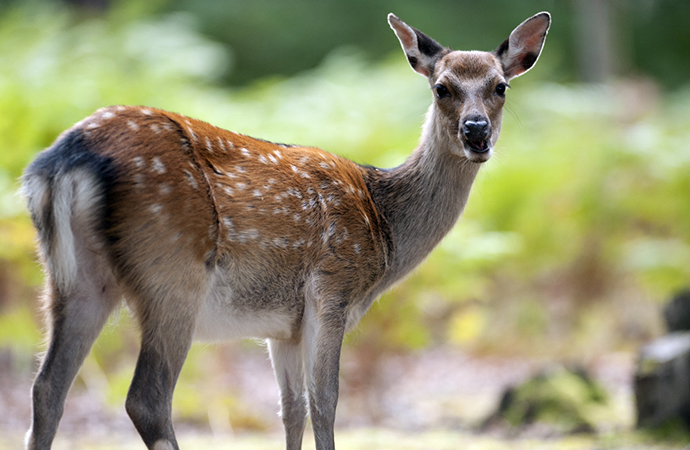 A car-free haven for wildlife as well as the starting point of the Boy Scout movement, Brownsea is the largest of the islands in Poole Harbour and one of Dorset’s treasures. The journey to the island gives the impression that you are travelling to a magical, faraway land; arriving by boat, the first thing you see is the island’s few stone houses and the castle, with a backdrop of woodland. The first castle on Brownsea was built in the time of Henry VIII as one of a string of defences; in the 18th century it was rebuilt as a residence. In the late 19th century it burnt down and was again rebuilt; today the John Lewis Partnership rents it as a hotel for its employees and it is not open to the public. 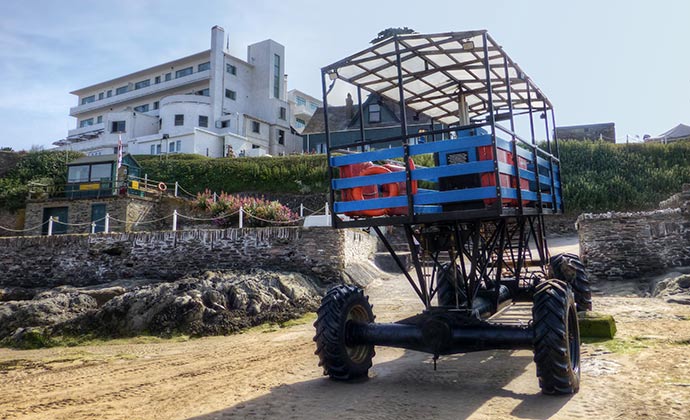 At South Devon‘s Burgh Island Hotel you must step back in time, to the 1930s, when life was indeed much slower. First, some history. The Pilchard Inn has been serving ale to visitors, on and off, since 1395. In its smuggling heyday there was supposedly a tunnel running from a cave on the beach where Tom Crocker, the king of smugglers, hauled his booty to the pub where it could be safely stored. Much of the island is open to non-guests, so the walk across the causeway – or more fun, crossing by sea tractor at high tide – is recommended. The view from the top of the island is stunning; even the cliffs around Ayrmer Cove seem to be in the Art Deco style.

From mid-April, thousands of seabirds descend on this grassy 16-acre lighthouse isle a mile off the coast of Amble, Northumberland and begin squabbling over the best nest site. To see the 30,000 puffins, eider ducks and tens of terns, kittiwakes and fulmars on the RSPB-managed reserve, take a boat tour from Amble (spring and summer only). Landing is not permitted because of the sensitivity of the site, but you’ll get excellent views of the birds, and spy-hopping grey seals. 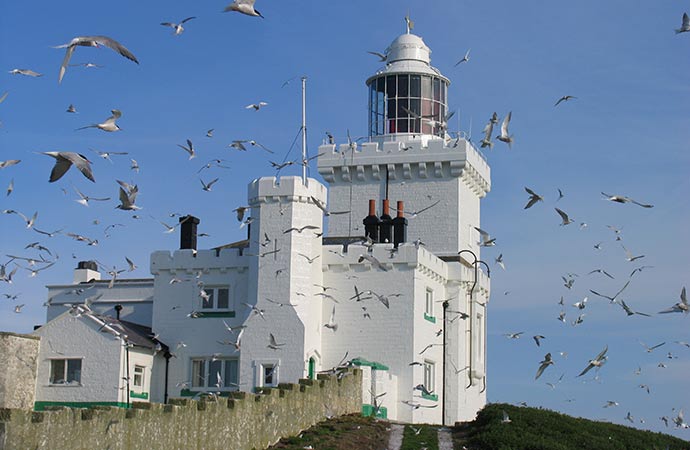 Coquet Island is home to the only colony of Britain’s rarest breeding seabird, the roseate tern, which nests on this tiny isle and almost nowhere else in Britain. Each pair is provided with a ground nest box that the birds ‘decorate’ with shells, shingle and objects washed up on the shore. The island’s manager, Paul Morrison (aka ‘Captain Coquet’), told me that one year he found a nest adorned with daffodils and another with fragments of paint. ‘I’ve also seen a Gothic “hut” decked out with rabbit bones,’ he said. Some birds are so particular that they return to the same nest box every year. Warming seas and the fall in availability of sand eels (the main food of puffins and terns) threaten the survival of the seabirds here and elsewhere along the coast. 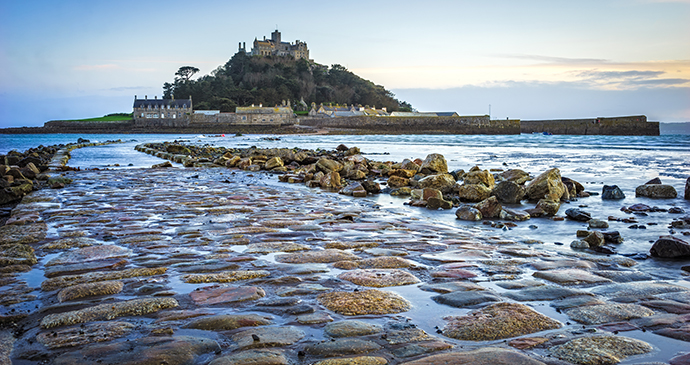 The entire essence of Cornwall appears to have been distilled into this immoderately picturesque icon of Cornish myth and history, a quarter of a mile from the mainland. Saints and tinners, soldiers and fishermen, Royalists and Parliamentarians, artists, gardeners and architects have all left their mark on the island, but it’s far from pickled in its past. A community of about 50 live in the houses and cottages clustered around the harbour and the castle is home to James and Mary St Aubyn, who have been in full-time residence since James’s uncle, the late Lord St Levan, retired to the mainland in 2003. When the cobbled granite causeway is exposed at low tide, it’s just a five-minute walk to the island from Marazion and a chalked notice informs you of the time by which you must leave in order to avoid being cut off by the tide. A boat service runs when the causeway is under water.

St Mary’s, The Isles of Scilly 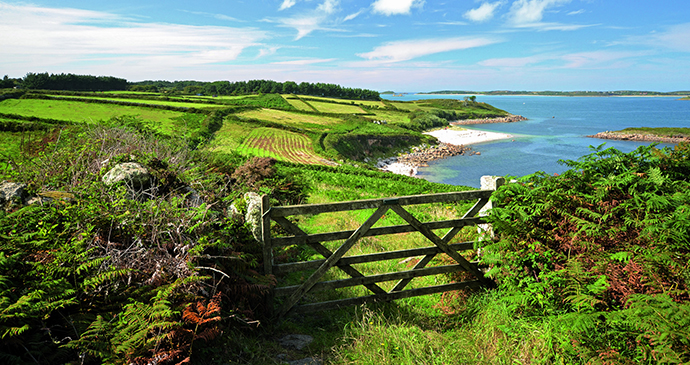 The fun of the Isles of Scilly lies in exploring and discovering the distinctive character of each island and in enjoying the pauses for the heart-stopping views across the misty recessions of the archipelago. St Mary’s, the largest of the inhabited islands, is the hub for all these adventures: flights from the mainland arrive here and the ferry from Penzance ties up at Town Quay, next to the busy inter-island boats. It’s the only island with anything resembling a town, and most of the residential and holiday accommodation is to be found here.There’s lots to be said for spending a day on St Mary’s, pottering, chatting, walking or just soaking up the views. You might start by wandering through the Garrison gate (turn left in front of the chemist’s in Hugh Town) and climb the steep hill to enjoy the views from the Star Castle – now a rather splendid hotel – built in 1595 within moated fortifications constructed in the shape of an eight-pointed star.

Get 10% off all titles in our Slow Travel series: