How do you start describing a place as utterly different as North Korea? My 18-day visit with Regent Holidays was exhilarating, fascinating and bizarre – as I expected. I also anticipated being bored stiff at times, as I was, but I never thought there’d be so many moments when it felt as enjoyably familiar as any other holiday in an exotic destination. 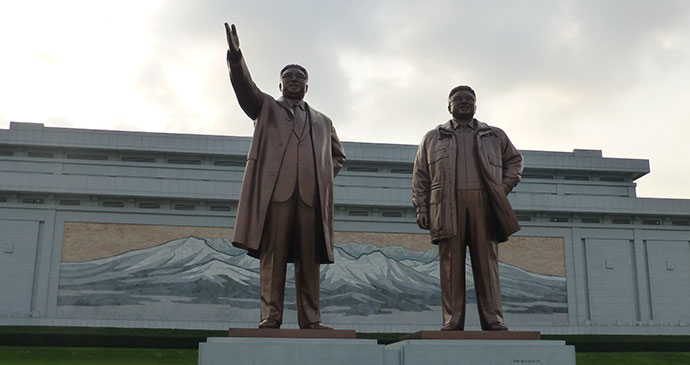 What could possibly be familiar about the world’s ‘most secretive nation’? The people, to begin with. The clue is on the cover of our North Korea guide: they smile, they wave, they attempt to engage in conversation. I expected a Soviet approach to foreigners – unsmiling and intimidating. I even thought the rooms might be bugged. So these beautiful, confident, friendly North Koreans came as a delightful surprise, as did the fact that women wear their lovely  traditional dresses for all sorts of occasions, like when explaining to us foreigners (in Korean so translated by our own guide) about the monuments.  Our main guide was delightful, laughing at our stupid jokes while doing her best to toe the line, and our Number 2 guide (all tourists, even individual travellers, must have two guides) kept a close eye on us and did his best. I think. 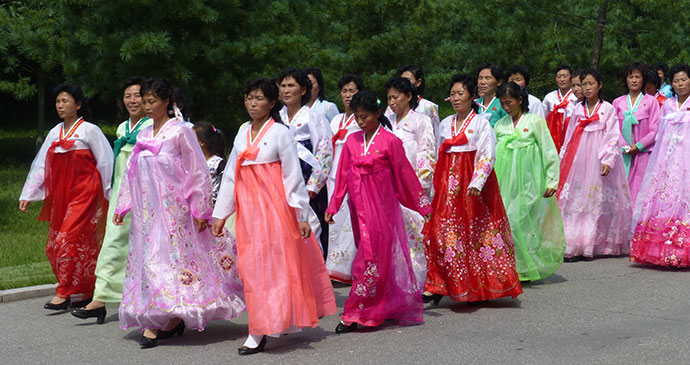 Then there’s the rural way of life which we viewed from the bus windows during our long journeys. In a socialist economy everyone has a job, even if it’s sweeping out potholes in the road (of which there are a very large number), transporting sand in their oxcarts to fill those holes, or riding bicycles loaded with sacks and sometimes a family member, sitting elegantly sideways on the luggage carrier.  North Korea – the DPRK as we have learned to call it – likes to think that all agriculture is mechanised. It’s not, and the gentle ambling oxcarts serve their purpose well, as do bicycles. Fuel is scarce, spare parts scarcer and private money almost non-existent. No wonder we never saw a private car and precious few other cars on the broad highways.

I knew about the lovely scenery because the natural world is always what engages me when travelling. I’m not a city person and get easily bored being shown stuff; I want to follow my own interests. So our visits to a food factory, a fertilizer factory and a port were just things to put up with, as were the vast buildings commemorating the Great Leaders’ many heroic deeds, whilst the sea- and landscapes were as beautiful and easily enjoyed as in any popular holiday spot. As beautiful? Better, I think. Take the beach-front Majon Hotel by the Korean East Sea. A curved stretch of yellow sand backed by pleated cliffs makes way to a gentle sea of just the right temperature for an early-morning swim. And – bliss! – being a private hotel beach it was permissible to go alone – although our guides did materialise. Just in case. There were recliners, and parasols, and no other tourists. 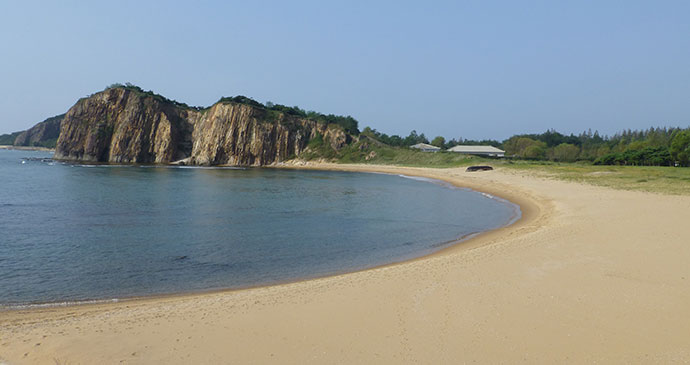 I expected the scenery high-spot to be the hike up to the. The itinerary said ‘on a good path’ and this was a well constructed stone-paved path, with numerous bridges and view points, making it as effortless as possible so providing lots of opportunities to look at the spectacular gorge scenery. But it rained. It poured all day, relentlessly, unstoppably. We plodded upwards, splashing up the path that was now a fast-flowing stream, and saw very little through the mist and cloud. Still, I have a pack of postcards showing what I missed and can envy the fantastic-sounding hiking trip that Regent is planning for next September. 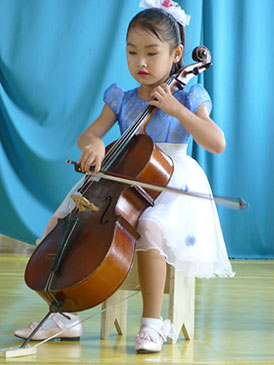 So that’s the familiar, but you don’t visit the DPRK for the familiar, you come here for the bizarre. And you get it is spadefuls. How often on holiday do you find a gas mask in the wardrobe?  Or be asked to bow a total of 21 times to huge bronze statues – and requested not to do handstands in their presence? Or land at an airport in the company of MIG fighters? Or ride in a Russian-built helicopter equipped with a desk, sofas, armchairs and a floral carpet – and not a seatbelt to be seen?  Or be told by your tour leader to delete some atmospheric photos you’ve just taken? Or tour a war museum considerably larger than Buckingham Palace where you can view a battlefield diorama graphically portraying dead US soldiers having their eyes pecked out by crows? Or, by contrast, be greeted by smiling soldiers at the most fortified military area in the world, the DMZ, who are yearning to have their photos taken with you? A fortnight of full day walks in different parts of the country – it’s going to be quite something.

North Korea, the DPRK, is changing. The hotels are (mostly) comfortable, the food (mostly) very good, and restrictions on tourists are being relaxed. Now seems to be the perfect time to go, before it changes too much. 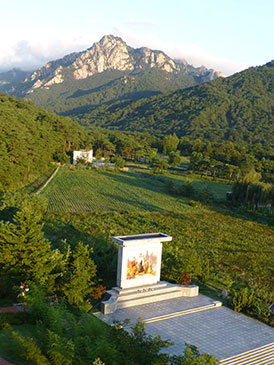 1. The extraordinary talent of tiny children in dancing, singing, and playing musical instruments
2. Chatting to school children in their class rooms
3. The display of gifts at the International Friendship Exhibition. The finest articles a country, or its socialist parties, can produce. And the guards had silver-plated Kalashnikovs!
4. The Pyongyang Metro
5. The Mausoleum (the Palace of the Sun) where we viewed the embalmed remains of Kim Il Sung and Kim Jong il, and added substantially to our number of respectful bows.
6. Hiking on Mt Paekdo and Kumgang (despite the rain)
7. Majon Beach
8. Learning that the road closure that caused us problems with because of a nuclear test!
9. The cleanliness of Pyongyang
10. Beautiful women in beautiful dresses
11. The vast, marble-clad hotel lobbies
12. The colour and paintings in Buddhist monasteries
13. Happy families in the park on National Day
14. Gazing out of the window on bus journeys
15. The 10k race at Mt Masikrong Ski Resort. Our three representatives acquitted themselves magnificanetly, with Regent’s Carl Meadows coming in fifth, despite claiming he’d never run before. And if the nice Italian who also did well reads this please get in touch – I’ve lost your email address!

Inspired to visit? Start planning your trip to North Korea with our comprehensive guide: