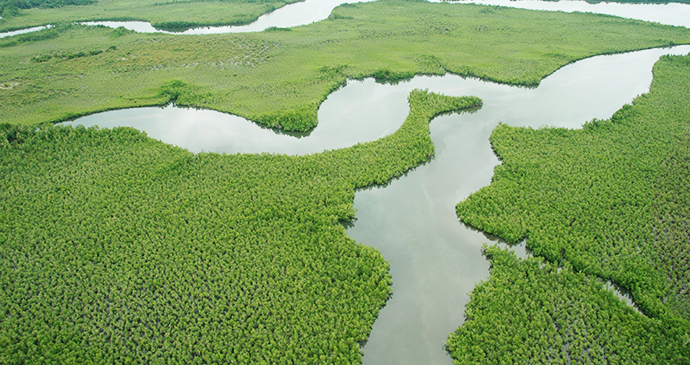 The island of Sherbro is the place to come for magic in Sierra Leone © tormentor4555, Wikimedia Commons

‘I will call in the police for the law’s sake. But if I want to know what really happened, I will call the witch hunters,’ is the sober, rational assessment of one educated Moyamba resident. He’s not alone. For farmers who have lost their tools or had a goat stolen, families who have lost a child unexpectedly, city dwellers shorn of their mobiles, government ministers seeking re-election, a troupe of paranormal investigators is always at the ready.

Sherbroland is the place to come for magic. Home to many of the Kamajor hunting militias that formed resistance to the rebels during the war, part of their fearsome reputation came from the supposed efficacy of their magic, going into battle covered in charms and amulets that they fervently relied on to evade bullets, command mortars where to drop, turn into wild animals, and become invisible.

Akin to a travelling circus (or the A-Team), Shenge’s witch hunters wander the Southern Province and beyond, bringing their special powers to bear on case after case. For a bunch of detectives, they certainly have a great sense of theatre. Grass-skirted, face-painted, wearing women’s wigs and bells around their ankles; instead of a press conference, they announce their presence with an initial performance of their skills. These generally take place at night, under the light of flaming torches, a dizzying whiff of kerosene and a backdrop of furious, unabated drumming.

By the time a demonstration of their powers is ready to begin, the entire town is in attendance, rows of wide-eyed faces stretching back into the black, utterly transfixed. Most of the shows take a similar format, starting with several minutes of acrobatic feats, sweat-drenched rhythms and saucer-like eyes. In between come interludes of ‘magic’ that build in daring and complexity. Fire-eating and breathing, smashing a beer bottle and chewing the broken glass, perforating various body parts with skewers and lying on top of shards of glass and nails are all part of the uncomfortable mix. Performers sometimes stand up with blood running down their backs. The culmination of the show, involving a white sheet and gasps from the audience, is a physical disappearance of Houdini-esque audacity.

It’s unlikely a foreigner will be able to watch the real work of the witch hunters, so these spectacles have to stand in, and can, of course, be organised for visitors for a fee – Le20,000–50,000 depending on the size of the troupe (plus kerosene for lamps).

When actually trying to divine a villain or investigate a crime scene, the witch hunters will hang out in a house until they get to the bottom of what has happened, questioning family members, summoning the spirits, mixing potions, waiting for a confession. Often they form a circle of those involved and announce a future date for the real witch hunt. Several people have been known to be so scared merely by this initial meeting that they come forward, confessing all, at once – anything to avoid the subsequent curse, humiliation and visitation of juju, which can involve various levels of pain up to and including death. In other ceremonies, bits of liver and blood are planted as a means to scout out the witch, who, in one case, was found cowering (invisibly) under a rock.

To see a performance in action, watch Greg Crompton’s documentary on YouTube (www.youtube.com/watch?v=WU9nhVW8zDk).

Read more about witches, secret societies and traditional medicine in our new guide to Sierra Leone: