Every year we go on a company outing, and in late 2018 we put the authors of our guide to The Chilterns and the Thames Valley and travel narrative The Country of Larks to the test, asking them to use their expert knowledge to help us create a perfect day out in Henley-on-Thames, including a trip to the magnificent grounds of Greys Court.

The intriguing Greys Court juxtaposes a comfortable family home with fragments of a larger estate from centuries past. The place to begin may be the outbuildings, particularly the 16th-century Well House, where you can see a rare surviving example of a vertical treadmill which a donkey turned by walking. The well was 200 feet deep, so the donkey probably got a lot of exercise.The Cromwellian Stables are not normally open, but you may get to see them in the run-up to Christmas. The 17th-century panelling and Elizabethan stone fireplaces are not necessarily complemented by the spiral staircase installed in the 1930s! While the house has passed through the ownership of six families in half a millennium, its current appearance owes much to the Brunners, the most recent owners, who reversed some of the changes which their predecessors had made. If you think there’s a theatrical atmosphere, that’s no surprise: the late Lady Brunner’s grandfather was actor-manager Sir Henry Irving, and her brother was a stage designer. The schoolroom features a portrait of Sir Henry and, slightly disconcertingly, a plaster cast of the hand of H B Irving (Sir Henry’s son), used in the 1910 production of Dr Jekyll and Mr Hyde, in which H B starred. The belts with scabbards and daggers from Sir Henry’s production of Macbeth, which sit in a glazed case above the far window in the dining room, seem genteel by comparison. 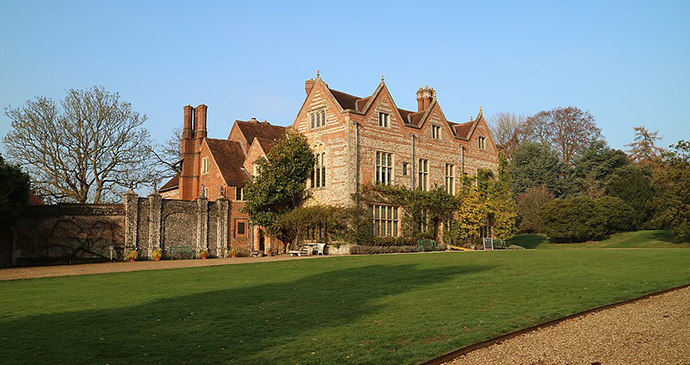 Greys Court, near Henley, juxtaposes a comfortable family home with fragments of a larger estate from centuries past © Crispin Cooper, Wikimedia Commons

Greys Court was owned, albeit only for three years, by Eve Fleming, the mother of 007 creator Ian and his travel writer brother, Peter. Eve bought the property in 1934, hoping it would serve as a home for her and a writing base for Peter, but his marriage to Celia Johnson the following year put paid to that prospect, and Eve sold to the Brunners. There are other traces of the Flemings nearby. Twenty minutes away in Ipsden lies the Gothic mock-castle of Braziers Park, where Ian spent his earliest years; he and Peter also spent some of their childhoods and early adulthoods at Joyce Grove, built in Jacobethan style for their grandfather in the small village of Nettlebed. Neither property is open to day visitors these days, as Braziers runs residential courses and Joyce Grove is a Sue Ryder hospice, providing palliative care for people with life-limiting conditions. You may, however, get a glimpse of the property if you visit on the third Saturday morning in the month for one of the regular sales of donated goods in the grounds, garage and outbuildings. You might pick up a bargain: some smart writing desks and good-as-new plush chairs were on display when we visited. If you ask the lady at the desk in the front hall of the main building politely, you might even get permission to take a brief wander round the wood-panelled ground floor, a wonderful complement to the house’s dramatic exterior. Turn up early; the sales attract plenty of regulars and parking can be a challenge. Peter Fleming and Celia Johnson are buried in the local churchyard and today’s Flemings still take an active part in village life.

Nettlebed may have got its name from the use of thread from nettles for linen cloth making, though a more romantic theory suggests that Roman soldiers in the 1st and 2nd centuries ad rubbed nettles on their limbs to keep warm on marches. Potters and brick makers have made good use of the local clay for almost a millennium, with brickmaking only ceasing in the 1930s. The sole remaining 18th-century kiln, later adapted for burning lime, is now one of the many listed buildings that give the village a venerable appearance.

If you want to learn more about historic houses in the Chilterns area, click here.

Keen to find out more about the history of the Chilterns & the Thames Valley? Check our new guide to the region: