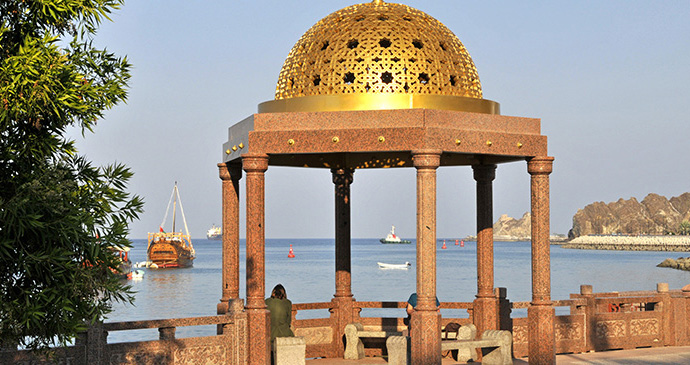 Today the main passage is increasingly given over to souvenirs; you can buy frankincense sold by men from the mountains of Dhofar, or just beyond the southern town entrance by ladies from Salalah.

Spreading south from its crescent bay towards the chocolate brown escarpments of the impressive ophiolite hills, Mutrah is the engaging port town that historically served Old Muscat. Mutrah’s success as a commercial hub came despite the nearby harbour of Old Muscat being more sheltered and having a better anchorage, as Mutrah was accessible to camel caravans from Oman’s interior. The sweep of whitewashed merchants’ houses, which form part of Sur Al Lawatia, the forbidden enclave, overlook the bay and were previously set directly on the beach; now houses and shore are separated by a modern road, shown as Al Bahri Road on maps but always referred to as ‘the corniche’.

Behind the corniche is a maze of streets that run into Mutrah Suq, which is easily the largest suq in Oman. Mutrah Suq (or Suq Al Dhalam – Market of Darkness) is the largest suq in Oman. In reality it is two suqs: the eastern area under the fort is the wholesale market, while the western area is for retail. The main passageway from the corniche entrance through to the town entrance is also a wadi (water course) that floods during heavy rains. During the winter, when the port is visited by cruise ships, the suq can seem like Alexanderplatz, Corso Buenos Aires or Oxford Street depending on the ship that is in port. 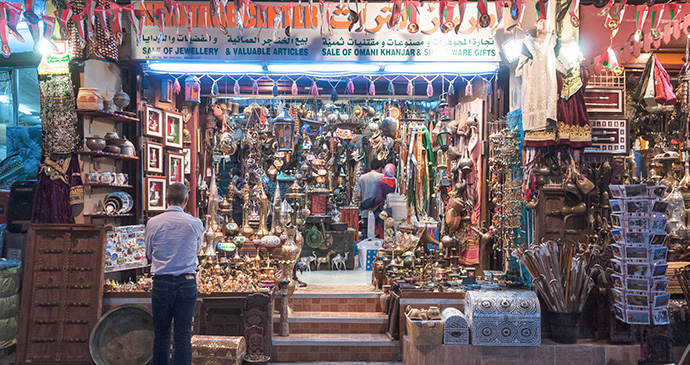 Since completion of the modernisation project for the corniche for the 35th National Day (in 2005), the suq has been adorned with a green glass domed entrance opposite pedestrian traffic lights; the dome and traffic lights are ideal to orient yourself by. Suq Al Dhalam takes its name from the darkness provided by the shading over the winding alleys, which are more extensive and complex than anywhere else in the country. As in the 1960s, you can still buy a Taiwanese tricycle, a Mexican gold sovereign, an old bedstead or a Penguin paperback. The original basis of the economy in trading here was selling dates and limes in exchange for cloth, rice and coffee. Today the main passage is increasingly given over to souvenirs; you can buy frankincense sold by men from the mountains of Dhofar, or just beyond the southern town entrance by ladies from Salalah. If you have a yearning for an ‘Ilove Oman’ T-shirt or belly dancer costume, this is the place to find them. You will also find coffee pots, incense burners, rose-water sprinklers, henna, Arabic coffee, oregano, dried limes, dried chilli peppers, perfumes, the ubiquitous pashminas, dishdashas, antiques, gold, silver, chests, rugs, handicrafts and even the essential animated toy camel. Khanjars, the Omani man’s ceremonial dagger are popular but expensive souvenirs.