With Iraqi food you get a lot for your money. Roast chicken is tasty and quzi, a huge dish of meat (usually lamb) and rice, the exact ingredients of which vary from town to town, is not for the faint-hearted. A large selection of salads and plentiful amounts of bread accompany every meal. Arab hospitality is inseparable from sharing a meal with friends, and to share food together is one of the best and most enjoyable ways for people of two cultures to cross boundaries and to establish a friendship. 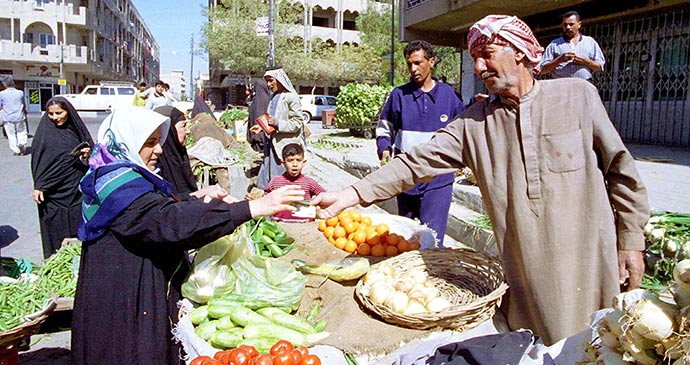 Iraqi cuisine has been influenced by the ancient spice routes, when spices were brought to the Middle East from India and Persia more than 3,500 years ago. Poets lauded the creations of Abbasid chefs that included various goat meat dishes and spitted gazelles. Iraqi dishes are extremely varied, ranging from meat and chicken kebabs to quzi, traditionally a whole lamb stuffed with rice, almonds, raisins and spices. The Bedouin speciality is sheep’s head cooked in an enormous pot. The most famous Iraqi dish is mazgouf, redolent of the biblical Tigris fish: as night falls a glittering necklace of lights illuminates the water, fishermen return with their fresh catch to the open air restaurants along the river bank. Split and hung to smoke lightly over a charcoal fire, the fish is laid above the glowing ashes and filled with peppers, spices, onions and tomatoes. Every restaurant and family has its own secret recipe.

Religious festivals are times for feasts. Eid al-Fitr, at the end of Ramadan (the month when Muslims fast from dawn to dusk) is one of the most significant celebrations in the religious calendar when neighbours and friends take elaborate dishes to each other’s homes. A spread of food might include tabouleh, crushed bulger wheat with sweet, chopped, broad-leaf parsley.

There are also imaginative salads with dressings of fresh lime or lemon, yoghurt and/or oil, again with an abundance of parsley or mint. Iraqis can create magic with aubergines. One dish, which looks misleadingly like thin, fried, crisp slices of aubergine topped with tiny dots of buffalo yoghurt, actually reveals an explosion of subtle flavours: garlic, sesame, sweetened baby peppers and other unidentified, scented excursions. Cooling wafer-sliced cucumber with dill and yoghurt, lamb, beef and chicken (always cooked with an array of vegetables mixed with sweet, thick natural fresh tomato paste) are essential to every great celebration and must be served for honoured guests.

Lavish meals are always served at births, weddings and circumcisions. On Eid al-Adha (the festival of the sacrifice which honours the willingness of Ibrahim to sacrifice his first-born son Ishmael to God whereupon God provided him with a lamb to sacrifice instead) a lamb is roasted and food is offered to the poor. Kurdish cuisine, which has been influenced by Turkish and Iranian dishes, is rich and varied.

There is no shortage of hotels in Baghdad ranging from 5-star establishments to modest, family-run hotels. Outside of the capital, the choice is more limited, although new hotels, including top-of-the-range ones, are starting to be built in the larger cities, and existing hotels, especially those in the medium- and lower-price bracket, are undergoing refurbishment and renovation. Ultimately this should lead to improved standards and more competitive pricing. You should note that many hotels in Iraq still don’t seem to have their own websites and there is scant information generally available about prices.

Outside of cities and towns accommodation is very sparse indeed. Camping is potentially a problem due to security issues and is not recommended unless you are on an organised tour. There are no organised camp sites such as you might find in Europe at the moment, although some are planned.