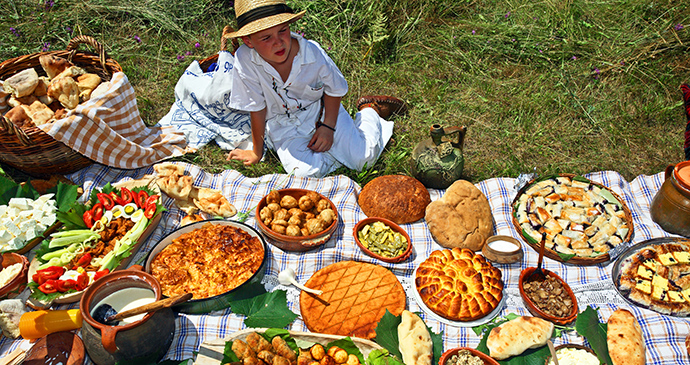 For Serbian home brewers, there is a sort of unwritten kudos attached to distilling a spirit so high in alcohol content that it is better suited to paint removal purposes rather than as a refreshment.

Serbian cuisine is similar to that of other Balkan countries, with a few specialities that it can claim for its own. The long Ottoman occupation clearly had some influence, especially in the wide range of grilled meats available. In fact, Serbs enjoy eating meat in as many ways as they can think of cooking it. This passion for animal flesh is reflected in a cuisine that, whilst both tasty and wholesome, can be daunting for vegetarians and health-food aficionados. While meat is enjoyed in quantity at every possible opportunity, so are fresh vegetables, and, in a country where fresh, unadulterated produce is still a fact of life – fertilisers and pesticides are rarely used – it is possible, with a little careful selection, to eat well whatever one’s personal dietary tastes might be. 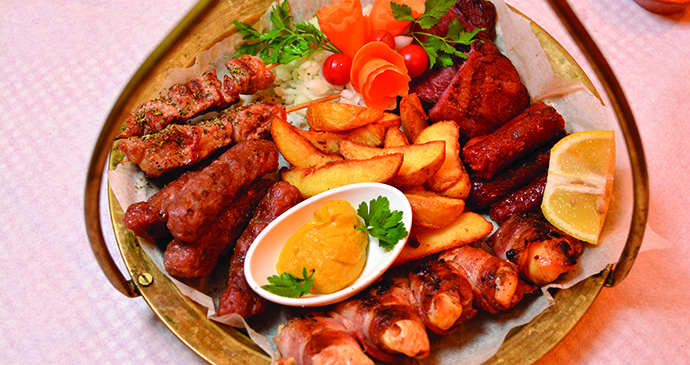 Some of the tastiest food in Serbia is the snack food that is sold on the street and from bakeries. Many small hole-in-the-wall establishments sell burek(cheese or meat pies, sometimes with apple to cut the grease a bit; they are also made with potatoes – very heavy and filling – or with mushrooms). Burek, which is of Turkish origin, is often eaten with yoghurt, and is more usually on sale in the mornings. 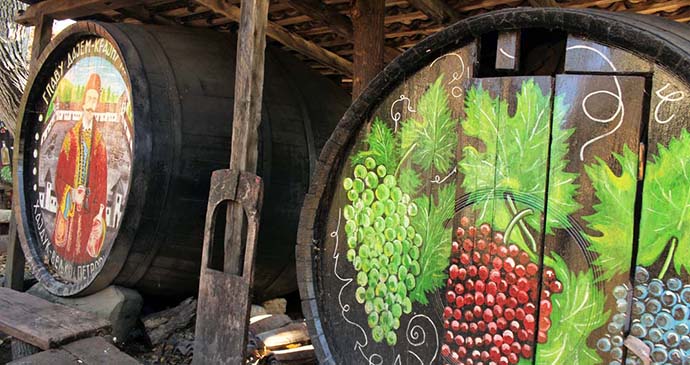 Traditionally coffee means strong and thick Turkish coffee, although many Serbs, like the Greeks, prefer to believe that they invented the drink themselves. Sugar is added at the beginning of the brew and so it is customary to specify the amount of sweetening that you require. Most Serbian wines are drinkable and some are actually very good. The best are probably the white wines that come from the Sremski Karlovci region in Vojvodina, but Serbia has a range of wines that come from various grape-producing regions such as Vršac and Negotin. 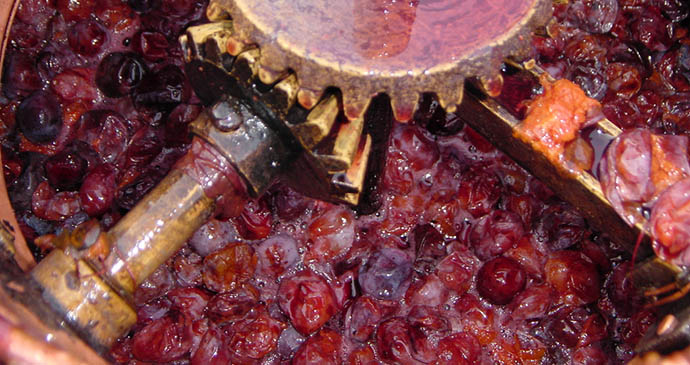 Cooking plums as part of the process of distilling rakija © Brankomaster, Wikimedia Commons

Serbians are proud of their wines but probably more enthusiastic about the range of alcoholic spirits they produce. Experimentation with these products can be something of an adventure. Šljivovica is a sort of brandy traditionally made from plums, but rakija, which is normally a spirit made from grapes, tends to be used as a generic term for any sort of strong liquor. Konjak is, as its name implies, cognac, and lozovača, another form of grape brandy. There are proprietary brands of all of these spirits available at low prices, as well as home-distilled versions of the same that range from palatably fruity to downright dangerous. For Serbian home brewers, there is a sort of unwritten kudos attached to distilling a spirit so high in alcohol content that it is better suited to paint removal purposes rather than as a refreshment.

Over the past few years dozens of privately owned city-centre hostels have opened up to offer inexpensive beds to young travellers.

The hotel situation in Serbia is similar to that of other eastern European countries surfacing from long years of indifferent state control. In the recent past, one of the main troubles with the Serbian hotel industry was the lack of choice outside the ubiquitous, mid-price, state-owned range. In the smaller towns there are usually just one or two of this type of hotel, with a few motels strung along the trunk roads to complement them. The situation is fast improving, however, especially in Belgrade and larger cities like Novi Sad and Niš, and in recent years quite a number of state-run properties have been taken into private ownership to be fully refurbished, or new luxury hotels have been built. In some cases though, especially in smaller towns, the old hotels have been closed down without anywhere to replace them and you need to look a little harder to find somewhere to stay.

Although the middle ground is generally well served, there tend to be few decent budget options or pensions for the more impecunious traveller other than the hostels that are now quite numerous in Belgrade, Novi Sad and Niš. Hopefully this will change in the future as more independently financed hotels are set up, and as more people offer private accommodation in their homes. For the time being, signs that offer SOBE – a room in a private house – are quite rare in Serbia, as the tradition has not yet caught on in the same way as it has on the Adriatic coast of Croatia or at resorts like Ohrid in Macedonia. The most likely places to find private sobe are resorts and destinations popular with holidaying Serbians like the Zlatibor region. Village tourism is a phenomenon that will probably become more popular in the next few years and private accommodation in towns and villages can sometimes be booked through the office of the local tourist organisation – those in Donji Milanovac, Knić and Zlatibor are particularly well geared-up for this.

Outside Belgrade, Novi Sad and Niš, there are few hostels in Serbia that offer cheap, dormitory-style accommodation. The capital is a different matter, and over the past few years dozens of privately owned city-centre hostels have opened up to offer inexpensive beds to young travellers. City apartments have blossomed too. Official campsites in Serbia are relatively rare. Where they do exist they are usually places with cabins and caravans that have limited space for tents.