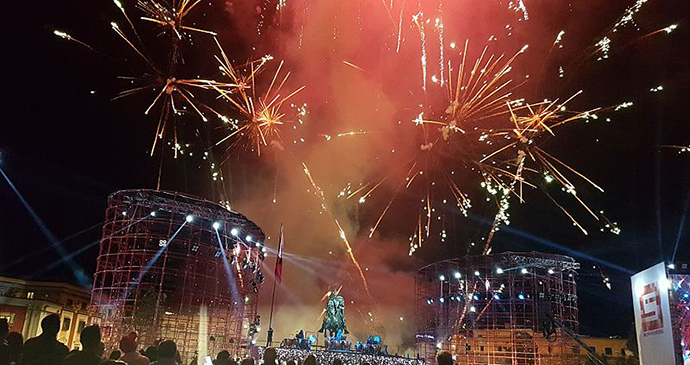 See in the New Year on Skanderbeg Square

Fireworks and live music welcome the New Year in Tirana’s main square. During Albania’s Communist past, New Year was the big winter holiday and Skanderbeg Square is still the place to be as December ends and January begins. Albanians of all ages flock to the city centre to enjoy the fun with their friends and families.

Ski or snowboard in the mountains of the north

Good snow in northern Albania usually lasts until March or even April. Skiing is possible at several locations, but Puka has the country’s best-organised winter sports resort. After your day on the slopes, enjoy delicious traditional meals and local chestnuts roasted on the open fire.

Celebrate the advent of summer the Albanian way

March the 14th is when Albanians celebrate the advent of summer. In Përmeti, Albania’s Slow Food capital, the Summer Day events mostly have something to do with traditional food – live cooking, raki distillation and a farmers’ market. Traditional games and folk dancing complete the celebrations.

White-water thrills in the Osumi Canyons

The best time to try rafting or white-water kayaking is when the rivers are high with snow-melt, in April and May. The spectacular Osumi Canyons, south of Berati, are a series of narrow gorges which wind through towering, multicoloured cliffs. Rafting and kayaking trips can also be arranged to other beautiful Albanian rivers, such as the Vjosa and the Devoll.

Explore the traditional handicrafts of the north

St George’s Day on 6 May is the focus of the Artisans’ Exhibition in Shkodra. This gives craftspeople from all over northern Albania the chance to demonstrate their skills and display their products.

The International Festival of Chamber Music brings together soloists and ensembles from Albania and abroad, for a week of recitals in venues around Durrësi, including the Archaeological Museum.

In July, you can learn how to make Korça’s traditional speciality lakror, a layered filo-pastry pie with various fillings. The women of the town demonstrate its preparation, after which the hungry spectators devour the delicious products. Musical accompaniment is provided by Korça’s traditional musical ensembles, serenata. 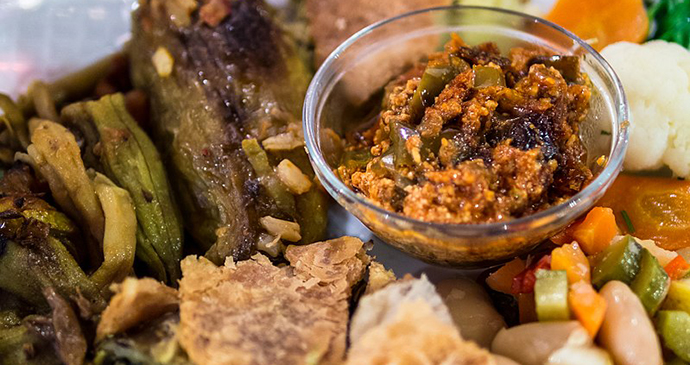 Albanian cuisine is rich in Mediterranean ingredients such as olive oil, tomatoes and pimentos. Lamb, as you would expect in a mountainous country, is excellent, as is fish from Albania’s rivers, seas and lakes © Kevin Rechts, Wikimedia Commons

Highland traditions in the mountains

The Tournament of the Alps (Logu i Bjeshkëve), in Kelmendi district, is a great opportunity to enjoy traditional music and dance in spectacular surroundings. The highlight of the weekend is the crowning of ‘Miss Alps’, Bukuroshja e Bjeshkëve. August is also the perfect time for hiking in the high mountains – how about walking into Kelmendi from Thethi, two days away?

Enjoy a day out at the beach

September is arguably the best month to visit Albania’s stunning coastline. The sea along the Ionian beaches is still warm enough for a dip but you can equally spend the day out picnicking and enjoying the views. 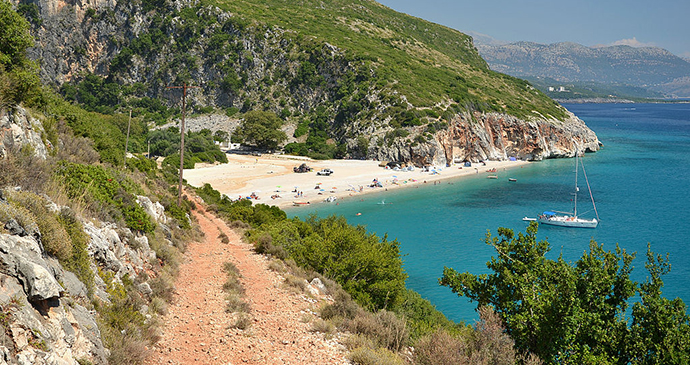 Albania has 362km of sea coast, with the Adriatic running from the Montenegrin border south to the Bay of Vlora, where the Ionian Sea begins © Pudelek, Wikimedia Commons

Two and a half millennia of drama

From your seat in a theatre where people first watched plays in the 3rd century BC, you can enjoy performances by theatre companies from around Europe. The ancient city of Butrint plays host to classical and modern theatre in the International Theatre Festival every year. Take insect repellent!

Albania declared its independence from the Ottoman Empire on 28 November 1912. Where better to celebrate the anniversary – Flag Day, as it is known – than Vlora, where that declaration was made? The building where Albania’s first government met, in Vlora’s port area, is now the Museum of Independence.

The weekend before Christmas sees Albania’s National Handicraft Exhibition, held in Tirana. Artisans from all over the country proudly display the best of their work – ceramics, musical instruments, and textiles such as rugs, traditional costumes and feltwork.