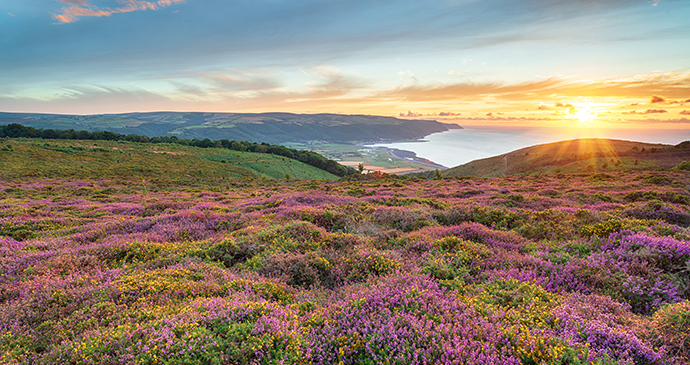 The lozenge of glorious countryside between Porlock, Minehead, the A39 and the sea offers an infinite choice of woodland trails and quiet lanes taking you through arguably the prettiest villages of Exmoor.

Designated a National Park in 1954, enchanting Exmoor is for many the real highlight of a visit to Somerset. It’s a soft landscape of rounded hills, splashed yellow from gorse, and purple in late summer when the heather blooms, and of deep wooded valleys. It has its coast, too, adding pebble coves and sea views to its repertoire, along with the many rivers that race to the sea from the high ground, slicing into the soft sandstone; the Exmoor coast boasts the tallest sea cliffs anywhere in England. This coastal strip is by far the most touristed part of Exmoor, particularly the winsome coastal village of Porlock, though the nearby weir and marshes are just as worthy.

The lozenge of glorious countryside between Porlock, Minehead, the A39 and the sea offers an infinite choice of woodland trails and quiet lanes taking you through arguably the prettiest villages of Exmoor: Luccombe, Allerford and Selworthy, three National Trust villages that are quintessentially rural England with their thatched cottages strung along narrow lanes. There’s medieval Dunster, too, dominated by its castle – one of just three in Somerset – though this is by far the grandest.

But, for me, it’s inland Exmoor that truly excels: high heather- and bracken-clad moorland and the patchwork green fields of the lowlands. On a sunny day it’s sublime, in rain it can be utterly bleak, though at least driving is easier on the high, open-view lanes. The rivers Exe and Barle, and their many tributaries, break up the ‘billowy heath’ in southern Exmoor with deep wooded valleys giving walkers and mountain bikers that perfect combination of high moor and sheltered combes. This consistently seductive landscape is dotted with a multiplicity of comely little villages – Exford, Winsford and Hawkridge among them – that offer plenty of opportunities for replenishment and respite.

There’s a wonderful variety of wildlife too; red deer – Britain’s largest native mammal – have existed here since prehistoric times and Exmoor is now one of the last remaining indigenous populations in the country. For many, the real highlight is seeing Exmoor ponies, which roam freely across open moorland. Elsewhere, you can seek out otters, bats and owls alongside all manner of rare bird and butterfly species. With so much of the park managed by the National Trust, clear signposting makes walking – of which there are endless possibilities – a real pleasure, though the landscape is totally geared up for a whole panoply of adventurous pursuits, organised or otherwise: cycling and mountain biking, horse- and pony riding, and even stargazing, Exmoor being a designated International Dark Sky Reserve. For more on this beautiful national park, click here.