Tajikistan’s climate is continental, and varies dramatically according to elevation. It is the wettest of the central Asian republics, but again rain and snowfall depend on location, from the relatively dry valleys of Kafiristan and Vakhsh (500mm a year), to the Fedchenko Glacier, which receives in excess of 2,200mm of annual snowfall.

Temperatures in Tajikistan’s lowlands range on average from -1°C in January to as much as 30°C in July. The climate is arid, and artificial irrigation is required for agriculture. In the eastern Pamirs it is far colder: winter temperatures frequently fall to 20° below freezing, and the average temperature in July is just 5°C. 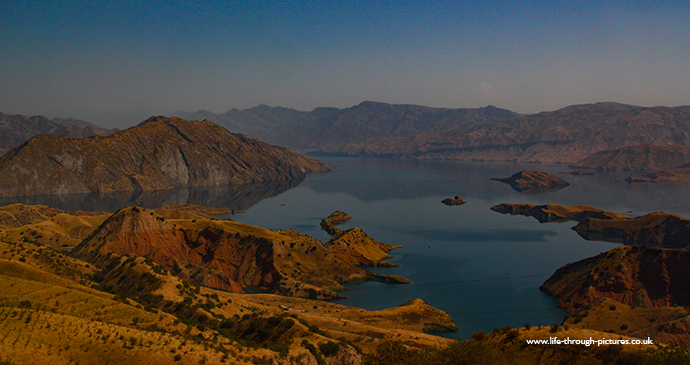 Nature has been kind to Tajikistan, bestowing the country not only with breathtaking beauty but with a moderate climate too © Raven Valentine, www.life-through-pictures.co.uk

Tajikistan explodes into life in the spring. As the snows subside and the higher parts of the country once again become accessible, the lower mountain slopes and pastures are a riot of colour. Tajiks celebrate Navruz, the Persian New Year, on the spring equinox, 21 March, with feasting, dancing and adrenalin-charged games of buz kashi, Tajikistan’s answer to polo.

In the summer months, when temperatures in Dushanbe and the lowlands soar to uncomfortable levels, the Pamirs come into their own: you can drive the Pamir Highway without the risk of snow from June to September, and at the same time climb the higher peaks. Glacial meltwaters have slowed, the rivers are no longer in spate and, though an occasional blizzard may still catch you unawares, you can join the shepherds as they drive their flocks up into the mountains to grow fat on the grasses of high pastures.

Tajikistan marks its Independence Day on 9 September, and the crops in the Fergana Valley and other agricultural areas are harvested. The fresh fruits at this time of year are divine. Nights in late September will already be cold in the Pamirs, and from October roads in the higher mountains will be impassable due to snowfall and ice. As the autumn progresses the emerald-green trees that form ribbons through the bottom of each river valley turn almost overnight to a fiery red and orange. In Tajikistan’s lower regions, which include most of the north and southwest, there’s a bite to the air come nightfall, but bright sunshine still warms up the day.

The winter is hard in Tajikistan, with many communities cut off and, if the harvest has been poor, dangerously short of food. For those with money, however, the snowfall marks the start of the ski season, and the Takob ski resort becomes busy with day trippers from Dushanbe. 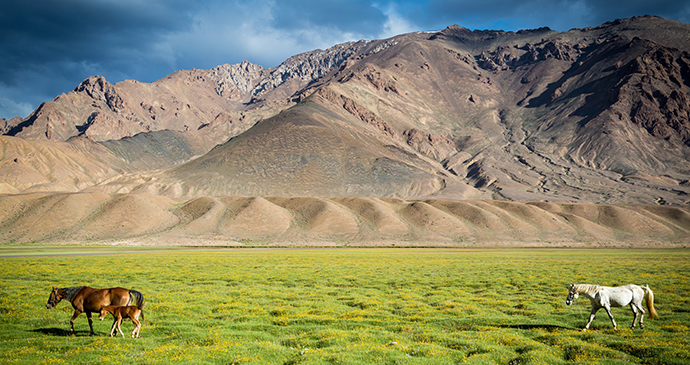 Tajikistan’s attractions are deeply varied, from dinosaur footprints to Soviet hydroelectric dams, and your itinerary is likely to be influenced by your personal interests, mode of transport and the areas in which you travel. To provide food for thought, however, here is an eclectic selection of what we feel are the country’s highlights

Five thousand years of archaeological history at Tajikistan’s first UNESCO World Heritage Site, Ancient Panjakent, and the so-called Pompeii of central Asia, Sarazm, are scarcely a stone’s throw from one another, close to the Tajik–Uzbek border. Though the most important archaeological finds have been removed to museums in Dushanbe and Russia, the well-preserved ruins and their small museums give a fascinating insight into Tajikistan’s early history.

The traditional sport of buz kashi, aka dead goat polo, is an adrenalin-fuelled rugby scrum on horseback played in mountain villages across Tajikistan and Afghanistan. Derived from goat raiding, teams of men (often from rival villages) race and wrestle the decapitated carcass of a goat with the aim of throwing it into a goal at the end of the pitch. Your best chance of seeing a match is at Navruz and, following that, on other public holidays in spring and summer.

The hot springs of Garm Chashma, just south of Khorog, are naturally occurring and have purportedly curative properties. Over thousands of years the mineral deposits have created a giant rock meringue, and you can sit and soak at the heart of it while staring up at the hillside in nothing more than your birthday suit. Men and women bathe separately, and it is a great way to relax and soothe tired muscles after a bumpy, dusty drive along the Pamir Highway. 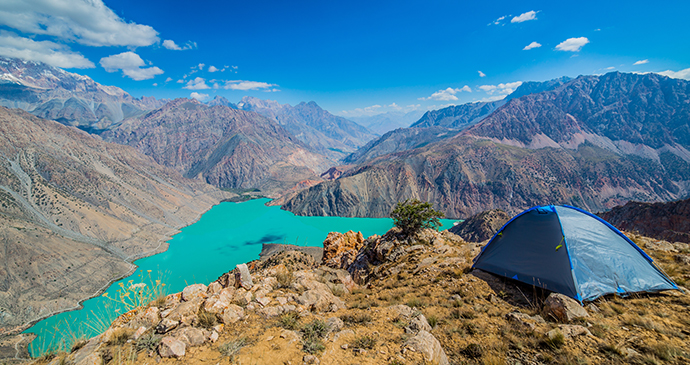 This isolated lake, surrounded by the snow-capped peaks of the Fann Mountains, is a favourite among locals and visitors alike © Alisher Primkulov, Shutterstock

This turquoise-blue lake surrounded by the snow-capped peaks of the Fann Mountains is an understandable favourite with Tajik day trippers and foreign trekkers alike. Easily accessible from Dushanbe it can be combined with the Seven Lakes for a five-day trek or, for those seeking something a little less strenuous, it’s an idyllic spot to camp, have a barbecue and rent a boat on the lake.

The prize for the world’s best drive is hotly contested, and the Pamir Highway certainly comes close to perfection. Magnificent mountains, gushing rivers and waterfalls, summer settlements with nomads and sheep, and scarcely another vehicle in sight are all points in its favour. Whilst it’s not a route for the faint-hearted, if you have the physical and mental stamina it’s a once in a lifetime experience whether you’re travelling by two wheels or four.

Tajikistan runs on tea, and it’s as significant for the social interaction that occurs while you drink as for the beverage itself. Whether you go to a chaykhona (literally a ‘tea house’) or are invited to join someone for a cup at their home, make sure you take the time to stop, drink and chat as the Tajiks do: hospitality and tea are virtually interchangeable and certainly not to be missed.

Isolation saved the Sogdians. Fleeing from Panjikent when the Arabs invaded, almost all were slaughtered. Only those hidden in the mountains, cut off from the outside world, survived. Some 1,300 years on, their few descendants still live in the Yagnob Valley, amongst them the last speakers of Sogdian, the tongue Alexander the Great would have heard on the battlefield when he rode into Bactria in the 4th century BC.