It is possible to eat very well in Libreville and Port-Gentil if you can afford the international prices. Some of the world’s most popular cuisines are readily available, notably Italian, Chinese and, of course, French. There are French-style boulangeries selling all manner of croissants and pastries, and the supermarkets are stocked with cheeses, wines and even meat and vegetables imported from France. The choice is supplemented by goods imported from Cameroon, Equatorial Guinea and South Africa. In Libreville, Port-Gentil and other places where there are tourist restaurants and hotels, it is usual to find both European and African dishes on menus, and often tasty grillades (barbecued fish or meat) as well. In smaller towns and out-of-the-way places there may be a handful of small African restaurants or maquis. These tend to be Senegalese or Cameroonian, and the best serve generous portions of good food for not very much money. No meal is complete without piment, a very hot sauce made of peppers and herbs. Fish-lovers will be in heaven in Gabon as fresh fish is available all over the country, from upmarket restaurants to local maquis. Gabonese-style crabes farcis (stuffed crabs; made from shredded crab meat cooked with onion, garlic, chilli, lemon juice, parsley and other spices then baked in the shell) are a must-try.

The quickest and cheapest sources of prepared food, however, are les bédoumeuses. These are the women selling doughnuts, small brochettes of meat and filled baguettes on the street. Amazingly, fresh baguettes are sold every morning in just about every market in the country, no matter how remote. French baguettes are one of the Gabonese staples, alongside smoked or salted fish, manioc, plantain and rice.

Typical sauces are prepared with arachides (peanuts), nyembwe (the pulp of palm nuts) or odika (an oil-producing seed also known as chocolat). Chocolat in fact consists of crushed, fermented odika seeds. This paste of crushed seeds is stuffed into plastic bottles used as moulds, and dried until the chocolat is solid. Readymade chocolat can be found in the big supermarkets in Libreville.

Bushmeat – antelope, porcupine, monkey, snake and so on – has traditionally been an important part of the Gabonese diet. However, attitudes are slowly changing, largely because of the bad publicity of ebola fever and growing awareness about endangered animals.

Vegetarians will probably end up relying on omelettes, hard-boiled eggs and avocados (if they are in season) for protein if they are travelling outside of Libreville. In the capital they will be able to vary their diet with pizzas and the occasional pasta dish. There is also, of course, no shortage of fresh fruit; locally loved atanga fruits make a good savoury option – their buttery flesh is generally boiled or roasted and eaten with salt.

To be on the safe side, it is better not to drink the tap water in Gabon unless you have water-purifying tablets. Bottled water is widely available, as are beers, wines and spirits, and soft drinks (often simply – and somewhat confusingly – referred to as jus) like Coca-Cola, Sprite, Fanta, and local brand D’jino.

Drinking is an extremely popular pastime and, particularly in rural areas, it’s quite often easier to find a bar than something to eat. The local beer Régab, a light lager sold in 65cl bottles, is good value. Its brewery, the Société de Brasseries du Gabon (Sobraga, owned by the French Groupe Castel), is one of the country’s biggest employers. Sobraga also brews Guinness, 33 Export, Castel and Beaufort under licence. Count on paying 600CFA for a Régab in the local wooden shack, rising to 1,000CFA in a mid-range bar or restaurant, and over 1,500CFA in an upmarket hotel or restaurant.

In rural areas, the ubiquitous palm wine is the usual tipple. It’s extremely cheap and easy to produce by extracting the sap from a wine palm and leaving it to ferment over the course of a day. The wine produced is sweet in the morning, but starts to pack a punch by nightfall. 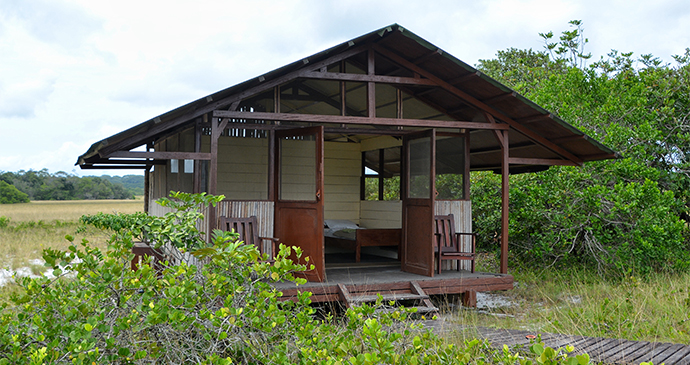 There’s no shortage of hotels in Libreville, a handful of which conform to an international standard of luxury, with the price tags to match. In fact, the problem lies at the opposite end of the scale: finding a cheap hotel. Most hotel rooms, in whatever price category, have en-suite facilities, a double bed, and a choice of fan or air conditioning. Budget travellers are hard pushed to find a hotel bed for less than 15,000CFA a night.

Outside the capital, the urban norm in Franceville, Port-Gentil and Lambaréné is for there to be one or two would-be luxury hotels (with a swimming pool, nightclub, restaurant and room service) and many more middle-range ones (usually with a bar-restaurant). Port-Gentil is also unique in the sheer number of its self-catering apartments. These are essentially hotels made up of self-contained, furnished flats – one or more bedrooms, bathroom, sitting room, kitchenette – that are charged on a nightly or monthly basis.

Safari accommodation tends to be of a good standard, with attractive wooden cabins or fully furnished, semi-permanent safari tents, with mosquito nets and running water (though this is not always hot). Electricity is generally provided by solar panels, or a generator is used at certain hours of the day. The expanding network of national park lodging run by Gabon Wildlife Camps in partnership with the ANPN is worth noting as a recommended option.

At the cheapest end of the scale are cases de passage, which are simple establishments with a handful of rooms at around 5,000CFA a night. These are used by truck drivers, sometimes double as brothels, and can be very rowdy. The best have clean sheets, a fan and either a shared shower room or a bucket of water in each room. Toilets – often outside and often long-drops – are always shared. Every town has at least one case de passage, often in the market – just ask. Cases de passage and
some hotels have a rate for rest (repos), which is use of the room during the day.

Although not always centrally located, mission houses with rooms for visitors are a good bet for just a little bit more than a case de passage. Rooms are invariably clean and good value, and sometimes there are facilities for cooking. Often there are gardens in which you can pitch a tent. It’s possible to cross Gabon hopping from mission to mission.

If you find yourself in a village in need of a place to sleep, ask for the village chief, who will help set you up with a place for the night. Chances are he will be very welcoming, inviting you to eat, putting a hut at your disposal or finding you a place to pitch your tent, if you have one. If you are able to contribute to the meal with food or wine, or even better, whisky, the gesture will be much appreciated.

Having your own tent is invaluable for anyone intending to spend prolonged periods in out-of-the-way places, such as the forest, but note that unauthorised camping is not allowed in protected areas. In (or near) populated areas, it’s important to ask for permission from the village chief before setting up camp.