Botswana is landlocked far from the coast and mostly in the tropics. It receives a lot of strong sunlight and most of the country is classed as either semi-arid or arid (the line being crossed from semi-arid to arid when evaporation exceeds rainfall). In many respects, most of central and northern Botswana has a subtropical ‘desert’ climate, characterised by a wide range in temperature (from day to night and from summer to winter), and by low rainfall and humidity. 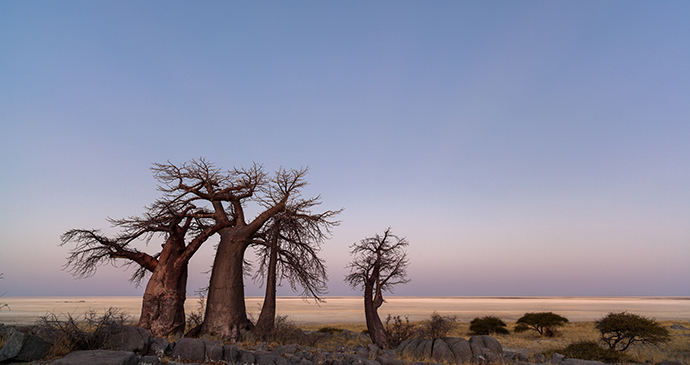 Most of the country is classed as either semi-arid or arid © Hannes Thirion, Shutterstock

Botswana’s climate follows a similar pattern to that found in most of southern Africa, with rainfall when the sun is near its zenith from November to April, and most areas receiving their heaviest rainfall in January and February. The rainfall is heavier in the north and east, and lighter in the south and, especially, the southwest. The precise timing and duration of the rains is determined by the interplay of three airstreams: the moist ‘Congo’ air mass, the northeastern monsoon winds, and the southeastern trade winds.

The water-bearing air is the Congo air mass, which normally brings rain when it moves south into Botswana from central Africa. Effectively a belt of rain works its way south across the continent, reaching its southernmost point around January or February. If you listen to any local weather forecasts, they’ll probably refer to this as the intertropical convergence zone, or the ITCZ. As the sun’s intensity reduces, the Congo air mass moves back north, leaving Botswana dry by around April.

One of the biggest reasons for coming to the Okavango – and you may only realise this once you’ve visited – is not the game or the birds. It’s simply the whole general ambience of being able to float over lily-covered lagoons with the sun on your back and a gentle breeze in your hair.

Thus January and February are the wettest months, when many areas will have regular and often torrential downpours in the late afternoon. When there are no clouds, temperatures can peak as high as 40˚C. However, it’s much more usual for them to be moderated by afternoon cloud cover and to stay between about 20˚C and 30˚C. Humidity fluctuates during the day, typically from about 50% to 80%.

By March the rainfall is decreasing, though still the afternoon clouds are around. Mornings and early afternoons will often be cloudless, and a few of the nights will go below 10˚C even though the average of the nightly minimums is nearer 18˚C.

April and May are lovely months. You may catch the odd afternoon shower in April, but these are gone by May – as are most of the clouds. The maximum day temperatures are around 33˚C, and while the nightly minimum average is between 10˚C and 15˚C, this hides the occasional chilly nights when areas of the Kalahari will record temperatures just below freezing.

June and July are the coolest months, with daytime average highs around 25˚C concealing the occasional day when the mercury just reaches 30˚C. You’ll still need your shorts, T-shirt, sunhat and suncream for the middle of the day, but as dusk approaches you’ll quickly need warmer clothes. The average night goes down to about 6˚C, but cold snaps of well below freezing (typically –5˚C) are common – especially in the drier areas of the Kalahari. August is very similar, though not quite as cold. You’d be very unlucky for it to go below freezing, even at night, and the days will often creep over 30˚C.

September and October are really the heart of the dry season, and the daytime heat gradually builds as these months wear on. Typical early afternoon temperatures are in the low 30s (˚C), and nights will seldom fall below 10˚C, though most will be nearer to 20˚C. The humidity is usually very low, typically 20–40%.

November is always interesting and can be unpredictable. Often much of it will simply be a continuation of October’s heat and dryness. But eventually the humidity will build and clouds start to appear in the afternoons. These will block the sun, cool the temperatures, and eventually produce some showers in the late afternoon. November mornings will generally remain fine and hot, with blue skies.

During December temperatures usually stay around 20–30˚C, day and night, and rain will be an increasingly regular occurrence in the afternoon. Humidity is normally 50–60%. The hottest days may just reach 40˚C, but even so the coolest nights won’t go below about 10˚C.

There simply isn’t one ‘best time’ to visit Botswana, or any of its wild areas. Most tourists visit during the dry season, from around May to the end of October. Within that season, the period from mid-July to mid-October is definitely the busiest – although Botswana’s small camps/lodges and private reserves ensure that it never feels busy, even when everywhere is full. (In fact, the country’s capacity for tourism remains tiny compared with that of South Africa, Kenya or Tanzania.) 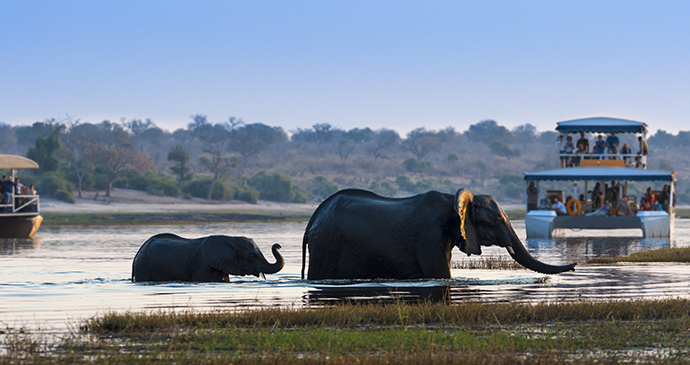 There simply isn’t one ‘best time’ to visit Botswana, or any of its wild areas © Peek Creative Collective, Shutterstock

Most of those visiting outside of this season are cognoscenti, who visit early or late in the season – May to July or late October to November – when the camps are quieter and often costs are lower.

A much smaller number of visitors come during the rains, from December to April, when camps will frequently be quiet for days. This often means that they will give visitors a much more personal experience, with private drives; their rates are often lower too, and they’re usually far more flexible about bringing children on safari.

The bottom line is probably that if game viewing is your overriding priority, or this is one of your first trips to Africa, then you’ll be better visiting during the dry season.

Much of the blame for this ‘glut or famine’ of visitors lies with overseas tour operators. Many who advertise trips here just don’t know Botswana well enough to plan trips which work during the rainy season. It’s much easier for them to make blanket generalisations, telling enquirers who don’t know any better that it’s ‘not interesting’ or that ‘you won’t see any game’ if you visit in the wet season. None of this is true, as long as you choose your destinations carefully, but of course most people don’t know this in advance.

While the rains are not the ideal time for everybody’s trip, they are a fascinating time to visit and should not be dismissed without serious thought.

Here is some guidance on various issues to help you decide what the best time for your visit would be. However, one of the biggest reasons for coming to the Okavango – and you may only realise this once you’ve visited – is not the game or the birds. It’s simply the whole general ambience of being able to float over lily-covered lagoons with the sun on your back and a gentle breeze in your hair. This is certainly best when the skies are fairly clear of clouds – from April to November.

The bottom line is probably that if game viewing is your overriding priority, or this is one of your first trips to Africa, then you’ll be better visiting during the dry season. Then the animals are much easier to spot, as no thick vegetation obscures the view, and they are forced to congregate at well-known water points, like rivers, where they can be observed.

However, more experienced African travellers are missing out if they never travel during the rains – as it’s completely different and can be superb. A few specific highlights of Botswana’s animal calendar would include:

Most of the herbivores are in their best condition, having fed well on the lush vegetation. It’s a perfect time to catch huge concentrations of springbok and oryx on the short grass plains of the Central Kalahari’s fossil river valleys.

Probably my favourite time to be in Botswana (and most of southern Africa!). It’s a great time to visit Savuti Marsh, and in the Okavango the floodwater moves down the Delta. 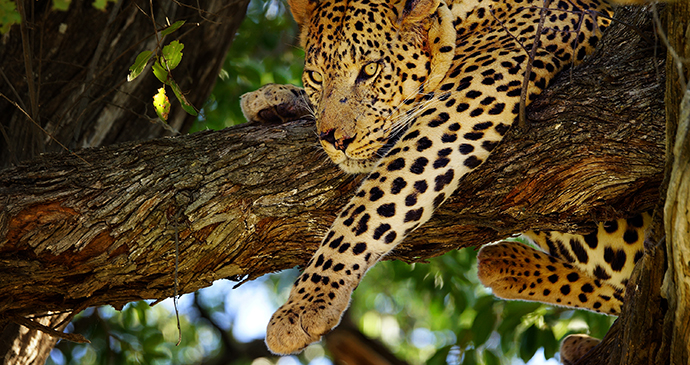 Leopards are easy to spot during July and August © Efimova Anna, Shutterstock

Leopard are generally easier to see, as they come out more during the twilight hours. Further into the year, they often wait until it is cool, only appearing later in the evening.

Can be a great month as often the rains haven’t arrived, leaving amazing game densities in the riverfront areas (yet visitors are thin on the ground and prices are low). However, too many cloudless days can mean high midday temperatures.

Crocodiles are nesting, and so found on or near exposed sandbanks. Various baby animals start to appear in November, followed by most of the mammals that calve sometime during the rainy season.

The highlights of Botswana’s birding calendar include:

Wattled cranes and other opportunists follow the floods in the Okavango, snapping up drowning insects and reptiles.

‘Fishing parties’ of herons, egrets and storks will arrive at pools as they dry up, to feed on the stranded fish. 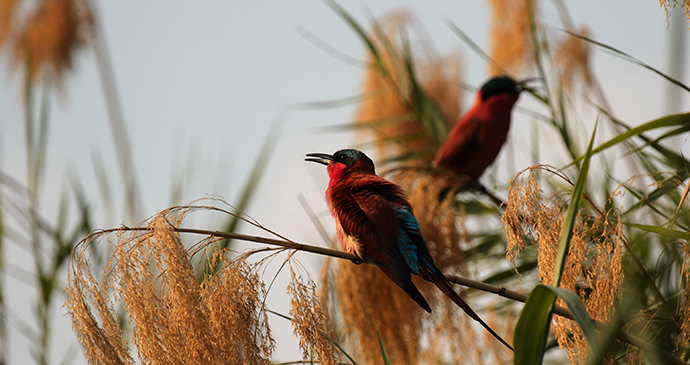 Nesting carmine bee-eaters colonise soft vertical riverbanks, skimmers nest on exposed sandbanks, and large breeding colonies of storks and herons gather at places like the Kanana heronry and Gcodikwe Lagoon. Migrant waders appear beside the edge of most pans and lagoons.

Most of the weavers are in breeding plumage.

Red bishop birds, yellow-billed storks and the spectacular paradise whydahs have their breeding plumage on display. If the rains have been good then the flamingos may be nesting on Sua Pan; ostriches gather in numbers on the pans of the Central Kalahari.

Juvenile birds of many species abound as this season’s young are fledged and leave their nests.