Sitting entirely in the northern hemisphere tropics, Benin has a wet tropical climate in the south dominated by a strong monsoon between late April and early October (though it can rain at any time) and high temperatures and humidity all year round. The north is similar but its monsoonal rains are far weaker, humidity less and overall temperatures higher. In April and May the temperature frequently climbs to an overwhelming 45ºC and more! The rains here tend not to start until early June and are over by mid September; rainfall outside of the rainy season is far less likely in this region.

Benin has two very distinct seasons – the wet and the dry. These two seasons can be further sub-divided. The wet season corresponds to the northern hemisphere summer of May/June through to September, while the dry season fills the remaining months of the year. You might think that the best time to visit Benin is during the dry season and this would largely be true, but of course we’re talking about the weather so nothing is as simple as it seems. The wet season for a start isn’t that wet – at least when compared with some of the other countries on the block. Sure, in the south at least, it rains most days and when it does so it’s impressively heavy, but this rain normally only lasts for an hour or so in the evening. The good thing about the wet season is that it’s the coolest and greenest time of year and so for many people is actually quite pleasant. On the downside, though, the mosquitoes are out in force, some minor roads are impassable, the beaches are rough and not safe for swimming and the national parks are closed or very difficult to get about in.

In general, therefore, the best overall time to visit Benin is in the cool dry season running from October to December, with November being probably the best month as well as one of the quietest in terms of other tourists. Apart from the weather factor, January can also be a good month to come, as this is when magic and Voodoo are at their most accessible thanks to the Voodoo Day celebrations on 10 January. 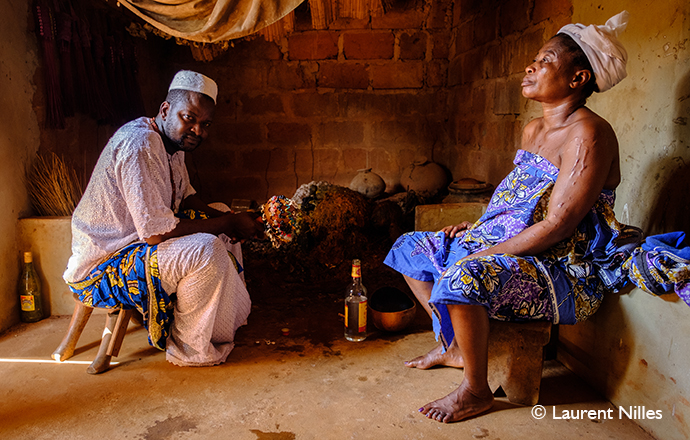 Selecting the highlights of a country is a daunting prospect. For a start, it’s virtually impossible for anyone to visit every town, city, village, hill, lake and beach in a country, so any list of highlights is incomplete. Then there’s the personal opinion factor; this is especially strong in Africa, where classic tourist ‘sights’ can be a little thin on the ground compared with, say, Europe or Asia and instead most impressions are built on the feel of a place, which of course depends on the people that you meet there. So, the following is a list of the attractions that came up most frequently in my conversations with other visitors.

The main reason that people traipse up to the north of Benin is for the two national parks, Pendjari and W, which are filled with elephants, lions, buffalo and an extraordinary diversity of birdlife. Pendjari is by far the easier of the two parks to visit, but W offers a real sense of adventure.

In many ways a similar deal to Ouidah, Porto-Novo, the official capital, has plenty of colourful contemporary life, a fairly tourist-accessible Voodoo culture, a sprawling market and an extremely picturesque old town. For museum buffs Porto-Novo is without doubt the highlight of the country, with the superb Ethnographic Museum as well as a clutch of other museums of lesser interest. It’s also possible to organise offbeat boat trips on the lagoon next to the city.

Capital of the once all-powerful Kingdom of Dahomey, Abomey is today a small, quiet country town with a friendly vibe, a fascinating museum inside the former Royal Palace, interesting markets and a nearby underground village. If that’s not enough then with luck it’s also possible to make an appointment for an audience with the most important king in the country.

The Somba villages outside of Natitingou are some of the most unusual and interesting architectural constructions in Africa. They look like oversized sand castles set among the scrubby hills of the north. Very close by and similar in many ways are the miniature houses of the Tanéka peoples’ almost toy-town villages.

In the floating stilt village of Ganvié, built with the aid of crocodiles, locals sleep, eat and shop on the shimmering lake waters. The village itself is like an organic creation of waterweeds that became houses. Yes, it can be touristy, but Ganvié is the most memorable day trip from Cotonou.

For much of the year the hot northern town of Nikki is very forgettable but, if your visit coincides with the annual horseriding and pomp-filled extravaganza of the Fête de la Gani then you should put Nikki high on your must-do list.

One of the easiest places in south Benin to get a feel for village life is Possotomè, a small muddy place on the banks of the lovely Lac Ahémè, from where you can explore various nearby village markets as well as take boat trips out to forgotten stilt villages. It’s also a likely spot in which to stumble upon some unexpected Voodoo celebration.

Right up on the border of Niger and the banks of the river with the same name, every Friday and Saturday Malanville has one of the biggest and most flamboyantly colourful markets in the country. It’s a great place to find people from across West Africa, especially the Fulani, or Peuls as they are known in Benin, in their over-the-top rainbow colours.

Perhaps more than any particular sight, the real highlight of Benin are the people themselves. It would be hard to find a friendlier and more welcoming people anywhere in Africa.

If you’re in Cotonou for work reasons and only have a weekend to spare then early on Saturday morning head to the stilt village of Ganvié. After a morning of messing about on boats here, hop in a car for the hour-long drive to Ouidah. Spend the remainder of the day and most of Sunday checking out the street life, museums and historical attractions before returning to Cotonou on Sunday night. At the time of research African Parks, which manages the fabulous Pendjari National Park up in the far north, was planning on establishing flights in a light plane from Cotonou directly to the dirt airstrip inside Pendjari. If these (excuse the pun!) ‘take off’ then it would perhaps also be possible to fly very early on Saturday morning to the park, spend the Saturday night at Pendjari Lodge and then, after getting a lion fix, flying back on Sunday afternoon.

With only a week to spare you can see a good cross section of the south of Benin. Spend day one exploring the markets and galleries of Cotonou, take an evening boat ride around the stilt village of Ganvié and don’t forget to sample some high-quality Beninese food in one of the city’s better African restaurants. Spend days two and three in magical Ouidah. For many people this history and Voodoo rich city is the highlight of southern Benin. Spend day four either on the beach at Grand-Popo or head to Possotomè in order to experience village life. Days five and six can be devoted to the ancient royal city of Abomey with its walls made of human blood and underground towns. Day seven can be spent in the pastel-coloured city of Porto-Novo with its interesting museums and vibrant Voodoo culture. If flights do start operating between Cotonou and Pendjari National Park then you could fly up to the park for a couple of days’ safari at the start of the trip before returning to Cotonou and heading over to Ouidah and, if time allows, Abomey.

In two weeks you could see the best of the north and south of Benin. Start by following the itinerary for one week as far as Abomey. From there it’s a long drive north to Natitingou. Allow at least a day in the city in order to visit the amazing Somba villages and/or Tanéka villages. From Natitingou it’s another long drive to Pendjari National Park. Allow at least two nights here before returning all the way back to Cotonou via beautiful Porto-Novo.