Before we go any further just remember that, for most Beninese, food is not something that you splash out lots of money on in order to have a divine culinary experience. Food is just something you need in order to survive and for that reason the average Beninese culinary experience is not something you will remember fondly for years to come. Having said that, the liberal use of spices and wide variety of ingredients means that Beninese food is considerably better than in many African countries. 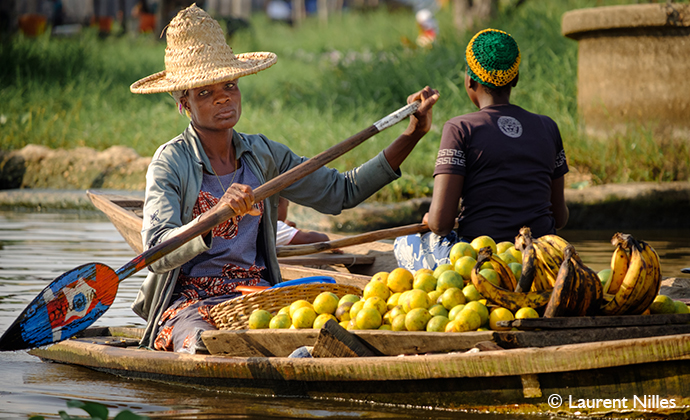 There is a vast array of fruit and veg available, especially in the south which has the whole gamut of tropical delicacies © Laurent Nilles

In fact, Benin and neighbouring Togo are renowned throughout West Africa for having the best food in the region and the secret to Beninese cooking lies firmly in the sauce used, which is often fairly spicy. Despite the fact that Beninese food has a good reputation in West Africa there are, like the cuisines of every nation, some decidedly unappealing delicacies such as okra (a green sludge that pops up with alarming frequency), giant snails which come without the garlic or in the easily downed bite-size nibbles of French escargots (not that I am saying that these are nice either), and grasscutter (cane rat), a large rat-like rodent that in fact tastes much better than it sounds. In Benin it’s popularly called agouti so we’ve used that name in this guide, but in fact true agoutis are found only in South America. Away from such exotics you can expect most meals to consist of a starchy, filling staple draped in sauce and, if you pay a little more, a sprinkle of meat, though this is normally more fat and bone than succulent steak. Aside from agouti, bushmeat is very rarely eaten in Benin (unlike in some nearby countries where monkey and other ‘delicacies’ are found in many a meal).

Whatever else you do in Benin you can rest assured that you’ll be knocking back the drinks. In a hot and sticky climate such as this you should, as a minimum, drink at least three litres a day just to replace the fluids lost through sweating. Starting with the ubiquitous symbols of globalisation, Coca-Cola and its cousins Fanta and Sprite are available everywhere you look. You can go to the smallest, poorest village with next to nothing to eat anywhere and be almost certain of finding a bottle of Coke. Where the US versions aren’t available their place is normally taken by one of the several local companies producing their own versions of these same drinks though they are normally much sweeter and not quite as refreshing. It doesn’t take long for these sugary drinks to lose their appeal and, fortunately for such times, you can often find bottled pineapple or mango juice or, for something a bit different, Moka, an iced coffee-style drink that takes a little getting used to but is more refreshing than most soft drinks. Real lifesavers are the Songhai centres that can be found in a few towns; they often sell beautiful homemade natural juices (and yoghurts). On the coast someone can always be found chopping the heads off coconuts to provide a delicious, cold and healthy drink. Possotomè is the big name in mineral water. It comes from the town of the same name on the banks of Lac Ahémè and, should you really get into it, you can even arrange to visit their bottling plant there!

The only place in Benin with a wide range of top-end luxury accommodation is Cotonou, which has branches of several of the multi-national business-class hotels. Grand-Popo, Parakou and Natitingou all have tourist hotels of a high standard and Abomey and Ouidah aren’t too far behind, but as soon as you get even a little off the beaten track then you are going to find the accommodation basic, though perfectly acceptable.

Though tourism in Benin is increasing by the year, there are only a couple of what could be termed as ‘backpacker’-style hotels and these are confined to Cotonou and one or two other coastal towns plus Abomey.

Airbnb has only a very few places listed under Cotonou, but it’s likely that more will be added in the coming years. Homestay-style accommodation is also a new concept in Benin, but the tour company EcoBénin organises homestays in a number of locations throughout the country.

If you are a camper then you will find a few opportunities along the coast to put up a tent in hotel grounds for a nominal fee and again in the national parks of the north – though this is more expensive. In fact if you want to explore the Parc National du W in any depth then camping is the best, and most romantic, way to do so. Finally, it’s hardly camping in the classic sense but Pendjari Lodge in Pendjari National Park is an upmarket, but exceptionally good-value, tented camp which gives all the romance of camping without any of the messy, uncomfortable bits!