The most important visual evidence of Elamite civilisation in Iran is the site of Choga Zanbil, where the remains of a stepped-pyramid temple dominate the landscape, and bear more than a passing resemblance to the great ziggurats of southern Iraq.

A short drive south from Susa/Shush will take you to Choga Zanbil, the Elamite city of Dur-Untash, which dates from around 1340BCE and was classified as a UNESCO World Heritage Site in 1979. The site was spotted from the air by oil survey engineers in 1935 and archaeologists were quickly sent in, but the main excavation campaign was delayed until 1950, lasting 12 years and recommencing after 1965. 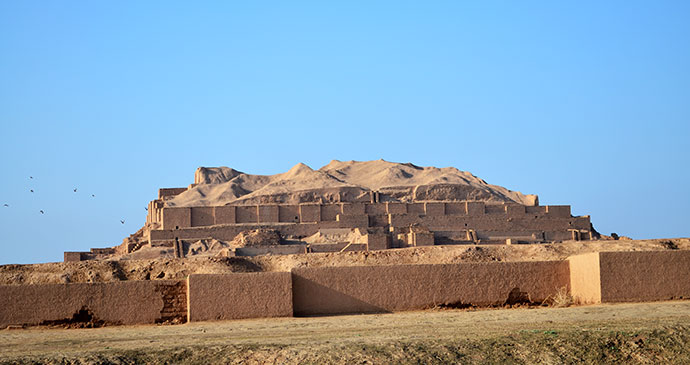 This ziggurat (105m²), originally with four, now three, terraces connected by external staircases, was surmounted by a temple dedicated to the god Inshushinak, ‘Lord of Shush’; its total height was probably 53m. The similarity with ancient Mesopotamian ziggurats is striking but archaeological work has shown that this one at Choga Zanbil has a different construction, erected from the centre outwards; in other words, the highest (now vanished) section was built first and then each of the ‘steps’ built around to a lower height.

The numerous remains of glazed brick, glass and ivory suggest that the exterior of the temple was richly decorated about two centuries later, and at least one wall (northeast) had moulded glazed tiles forming the figure of a huge winged bull, the symbol of Inshushinak, guarding the main staircase at ground level. Here and there, especially on the eastern wall, the odd glazed brick is still visible. At ground level there are still signs of the original sacrificial tables and a pit, presumably to catch the blood of the slain animals. 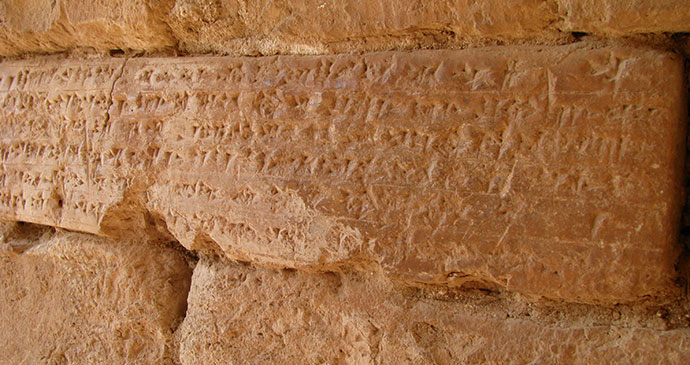 All around the lower terrace there are bricks inscribed in Elamite cuneiform giving the name of Untash Napirisha, the king who ordered its building © Darafsh, Wikimedia Commons

A 12th-century BCE bronze tableau found at Susa, now in the Louvre, depicts two naked priests or worshippers kneeling between such tables and trees, preparing a sacrificial offering, one pouring water on to his colleague’s outstretched hands. Just next to the brick construction, identified as a sacrificial altar plinth of Gal and Inshushinak, there is a footprint in the clay pavement, presumably that of an Elamite worker.

Iranian archaeological work from 1965 found yet more evidence that this was not the only temple within the precinct. In all, the remains of some 11 sanctuaries were identified along with three palaces, an elaborate water system of a reservoir and channels, tombs and tunnels, but everything suggests that after the invasion of Nebuchadnezzar I, all building stopped.

The final end for this ‘holy city’ came around 640BCE with Ashurbanipal, the Assyrian ruler who devastated the region, proudly recording: ‘I levelled the whole of Elam, I deprived its fields of the sound of human voices, the tread of cattle and sheep, the refrain of joyous harvest songs.’

Curious about visiting? Take 10% off our guide to Iran: