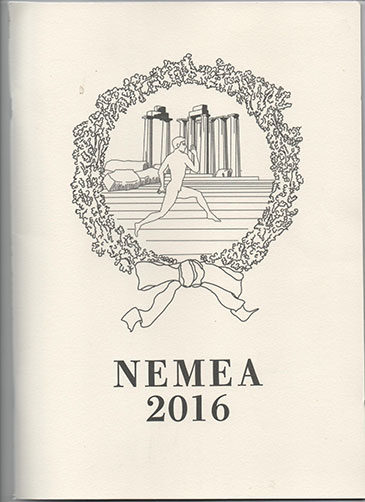 “I think I’m supposed to run naked through Greece!” Since I never win raffles I’d barely listened to the prizes offered at the posh British Guild of Travel Writers dinner at the Savoy, even though I’d bought quite a few tickets since you never know. I won a trip to the Peloponnese to take part in – if I wanted – the Modern Nemean Games. And, indeed, I hadn’t misheard about the naked bit. The detailed rules stated: “The ancient Greeks ran, and competed generally, in the nude – a practice that we do not insist upon.”

So where is Nemea and what are these games? It’s all down to one man, Stephen Miller, the Professor of Classical Archaeology  at the University of California in Berkeley. In the early 1970s, Miller instigated a dig at the ancient site of Nemea, having  been intrigued by aerial photos. First he had to buy the land, but the current land owner was happy to sell: “Nothing grows there”. Nemea was already famous for its Temple of Zeus and classical connection with the labours of Heracles (Hercules), one of which was to kill the Nemean lion. Linked to the Games is also the myth of Opheltes, the baby son of King Lycurgus, who the Oracle had decreed should never touch the ground until he could walk. But one day his nurse, Hypsipyle, was stopped by seven generals on their way to Thebes who asked for water. In her haste to show them the spring she put the baby down on a patch of wild celery in which a serpent was hidden. When she returned, the baby was dead. The athletic events, one of four of which Olympia is the best known, were supposedly created in memory of Opheltes, and some officials in the modern games wear the black of mourning. A wreath of wild celery is worn by the victors in the races which take place, like the Olympics, every four years.

On the last day of his dig in 1974, Miller unearthed evidence of the ancient stadium. This led to further funding and the thrilling discovery of the tunnel leading to the stadium. Participants of the Modern Nemean Games pass through this tunnel to reach the starting line, just as their predecessors did two thousand years ago. Their graffiti can still be seen on the walls. One is the name Telestas, who won a boxing event in 340BC and the other simply states “Niko” – “I win”.  From the archaeological point of view the tunnel is particularly important since it proves that the Greeks beat the Romans in the use of keystones when building an arch. 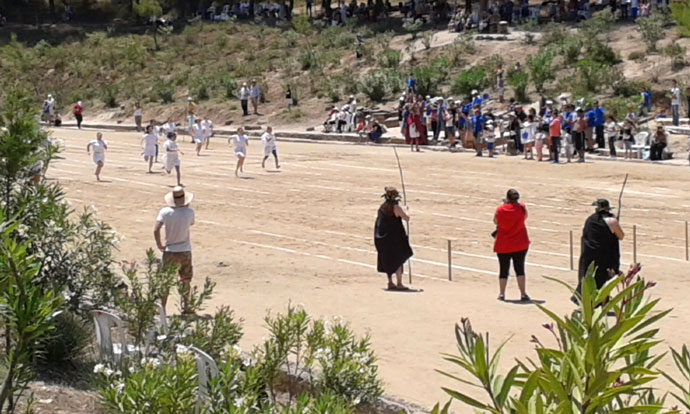 Stephen Miller was responsible for the revival of the Nemean Games in 1996 and is still involved. It was he, wearing a yellow robe, who shooed me away when I entered the runners’ area too soon. I should have been flogged for this misdemeanor – the rules state that: “He [the judge] will be holding a switch from the ligaria tree with which he will flog anyone who commits a foul or does not obey his orders.” I escaped the flogging but everything else is done, as closely as possible, in the spirit of the original games. Participants run barefoot, dressed in Greek togas or chitons. And it’s only 90 metres. These days ability is not important, and women can take part. Participants are nicely divided into groups according to age and gender, so I was encouraged to read that I was in a group for “Women whose age is 75 years”. The programme had a looser interpretation – my friend Roz and I were in the oldest group, ranging from 83 to 71. When it came to it, there were a number of no-shows, so we were amalgamated with some of the next (younger) group.  Nevertheless, surely only in the old ladies’ group would there be a discussion whether it was against the spirit of the original games to wear our hearing aids. 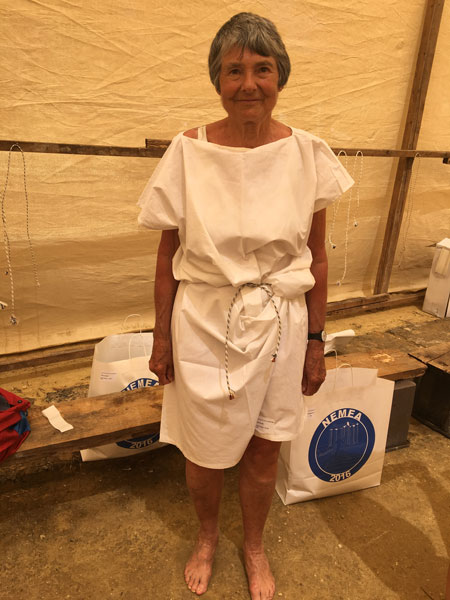 Once our names were called we went into the tent to change into our chitons and, if we wanted to be extra authentic, smear our bodies with olive oil. To create the chitons someone had been very busy with old sheets and a sewing machine. A rope belt allowed us to hitch it up to the required length. Then another roll call, and it was time to take the oath, promising to uphold the spirit of the games and do nothing that would bring shame on our families. I’d memorised the Greek for “I swear” which sounded something like “Gorgonzola” but I’d obviously got the stress wrong. So I just murmured something and raised my clenched fist with everyone else. “Now go forth into the stadium and be worthy of victory” said the judge (in Greek). So, as our name was called, and the trumpet sounded, we walked or ran into the arena to satisfying applause from the spectators. We picked a marble tablet with the number of our running lane on. Mine was zeta – Z. Worrying since we’d been warned that there was some rough ground in this lane.

The starting line is two parallel grooves in stone. It’s the original starting line and I speculated about all those fine masculine toes that had hooked into the grooves, as I looked down at my crooked ones. At least I’d cut my toenails. Then it was “poda para poda”, “ettime” and “apite” and we were off. I ran as fast as I could but I’m no sprinter, better at the slogging runs, so watched most of the runners’ backviews as they hurtled towards the winning line. Still, Roz and I didn’t disgrace ourselves. In our group of 12, I probably came about 7th with Roz a couple of places behind. And anyway, it wasn’t fair, the winner was a mere stripling of 68 (though at least she was British). She got a victor’s ribbon and a palm frond. Roz and I got a sense of achievement and anticlimax. That’s it? We’ll just have to come back in four years’ time.

If you want to find out more about traditional sports in the Peloponnese, check out our guide to the region: