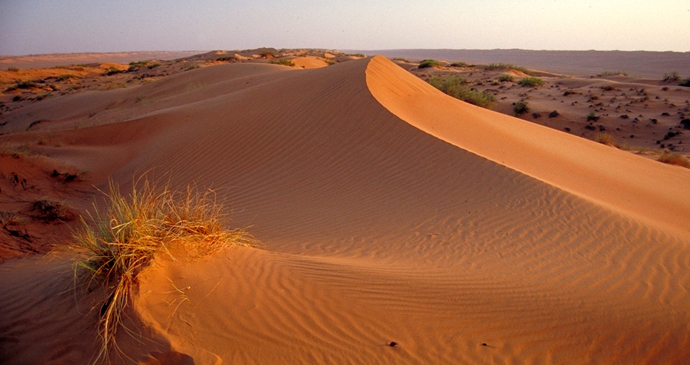 The Wihibah is a true sea of sand, measuring 180km from north to south, 80km from east to west, and with dunes 100–150m high. The northern dunes are primarily quartz in origin, with a multi-hued golden sheen from surface oxidisation, while the southern dunes are carbonate sand, pale in colour, and formed by the prevailing south–north wind direction. In the north the wind has created vast linear dunes whose length is in excess of 50km. The ridges of the dunes have created valleys that now contain most routes from the north to the Arabian Sea.

In the winter months night-time drops in temperature may cause mist whose dew can sustain both animals and plants. The sands were the subject of an expedition by the Royal Geographical Society in 1986, the results of which aroused international scientific interest. The 35 scientists involved discovered 150 species of plant, 200 species of mammals, birds, reptiles and amphibians, and 16,000 invertebrate specimens.

The Wihibah Bedouin families come from the sea coast to the oasis and live in the villages harvesting their dates.

Bedouin camps can be found along trails and tracks in the Wihibah, though today most people are permanently settled in one of the villages of Bidiyyah. Al Huwayah is a large oasis on the very edge of the Wihibah with extensive date and banana plantations. The high dunes almost completely encircle the oasis, giving a real sense of the encroaching desert. In the high summer months from June to September the Wihibah Bedouin families come from the sea coast to the oasis and live in the villages harvesting their dates.