The Musandam Peninsula is a paradox. It overlooks one of the world’s busiest and most strategic waterways, the Strait of Hormuz, through which a large percentage of the world’s crude oil trade passes, yet few have heard its name. Separated from the rest of Oman and closer to the Iranian island of Hormuz than the northern ‘mainland’ of Oman, it really is different from much of the rest of the country.

Towering sea cliffs, hundreds of metres tall, create what appears to be an impenetrable wall of rock – and so it has been, until recently.

Musandam is a great mass of rock literally rising out of the sea. Towering sea cliffs, hundreds of metres tall, create what appears to be an impenetrable wall of rock – and so it has been, until recently. Roads are a recent phenomenon in this peninsula; before 1980 precipitous footpaths were the only links between the mountains and the flat open plains of Al Fujayrah and Ras Al Khaymah. Even donkeys could not be used on such paths, and the Musandam towns of Khasab, Bukha and Lima, with their little harbours, could be reached only by small boats. 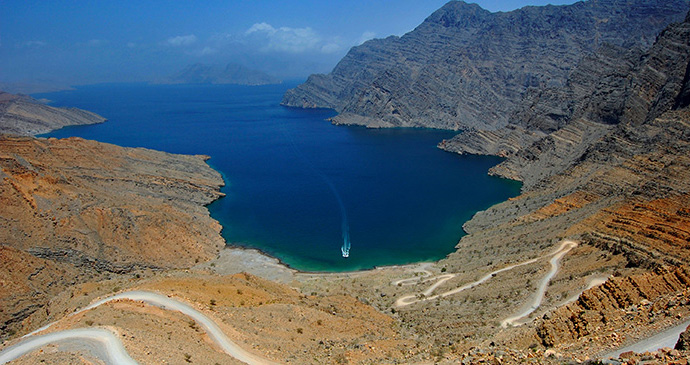 Boat trips can be taken on Musandam’s fjords © Askme9, Dreamstime

The most common attractions are towards Jabal Harim, Telegraph Island, dolphin watching, snorkelling, fishing, diving, fjords and birdwatching tours. The calmness of the fjords offers ideal conditions for canoeing. The hammerhead, nurse, reef and whale shark are found in the temperate waters of the Strait of Hormuz, especially from July to September. Dolphin-watching trips are done as part of a dhow cruise and you will almost certainly see Indo Pacific humpback dolphins and, with luck, minke whale.