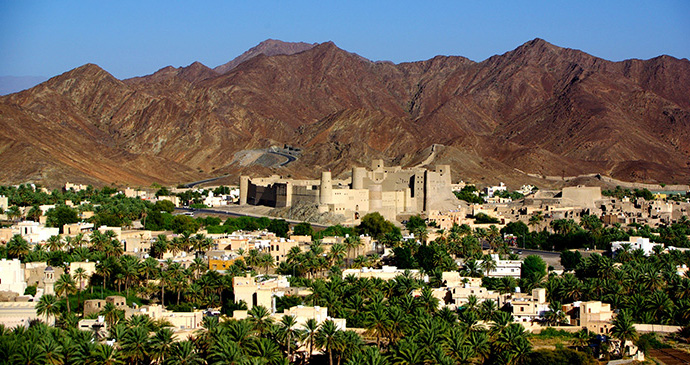 Located in the centre of Bahla, the fort sits on a small hill with archaeological remains dating back 5,000 years. It is one of the oldest in Oman, with some evidence of Sassanid remains. With its lofty hall, the main citadel in the southeast of the fort is the oldest area, perhaps dating from the late 13th century and the Al Nabhani dynasty. The upper rooms give excellent views, though the drops below some of the steps which have no side barrier mean care must be taken. The southern and western areas are more modern, dating from the mid 17th century. They were enlarged in the late 18th century, with a new section, Bayt Al Hadith, built in the 19th. The fort is part stone and part mud brick, perhaps reflecting the different periods at which the building took place.

It is a UNESCO World Heritage Site, and described as ‘a monument of global importance’.

It is a UNESCO World Heritage Site, and described as ‘a monument of global importance’. The UNESCO restoration project began in 1988 and work finally finished in summer 2012, when the Ministry of Culture and Heritage handed it over to the Ministry of Tourism. The restoration task was enormous and the state of disrepair so advanced that when they began work, the first two years were spent clearing rubble. A dearth of old photos (pre-1960) also meant that they were unsure of what the original looked like in some parts. The oldest-known photo was taken by a British colonel called S B Miles in 1885 and showed two incredibly tall wind towers, probably the tallest towers ever constructed in Oman.