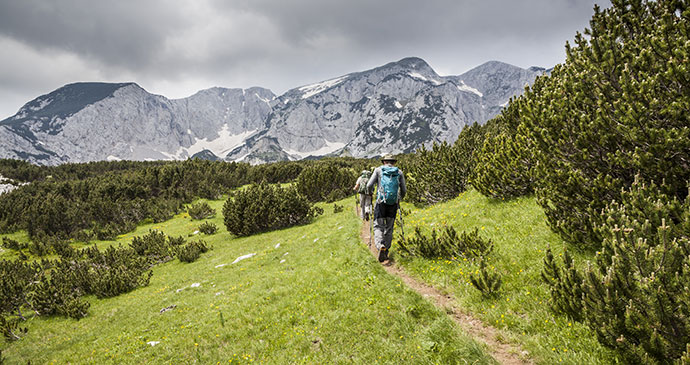 Sutjeska National Park is an ideal destination for those passionate about hiking © mapraest, Shutterstock

Zelengora Mountain is great for hiking and walking and there are several newly renovated mountain huts on its slopes. Bear and wolf sightings are common.

Sutjeska is one of Bosnia and Herzegovina’s oldest parks. It is famous for the Partisan victory over the Germans in World War II and there are large stone monuments commemorating the event. The park itself is 17,500ha of magnificent wilderness, including Perućica primeval forest. Beech trees tower over 55m high and endemic black pines grow from the rocky faces that protect the ancient forest. Skakavac Waterfall can be seen from the lookout point – this 75m waterfall is dwarfed by the massive blanket of green trees that covers the valley.

The Sutjeska River has carved a stunning valley through the middle of the park and divides Zelengora (Green Peaks) Mountain from Maglić and Volujak mountains. Bosnia and Herzegovina’s highest peak at over 2,386m (7,400ft), Maglić is located in the park, directly on the border with Montenegro, and presents a challenging climb for experienced hikers. The park has a hotel in Tjentište (the flat valley along the Sutjeska River) and a café and restaurant. The hotel is socialist style and not particularly attractive but the nature within the park border competes with that found anywhere in Europe. Zelengora Mountain is great for hiking and walking and there are several newly renovated mountain huts on its slopes. Bear and wolf sightings are common.