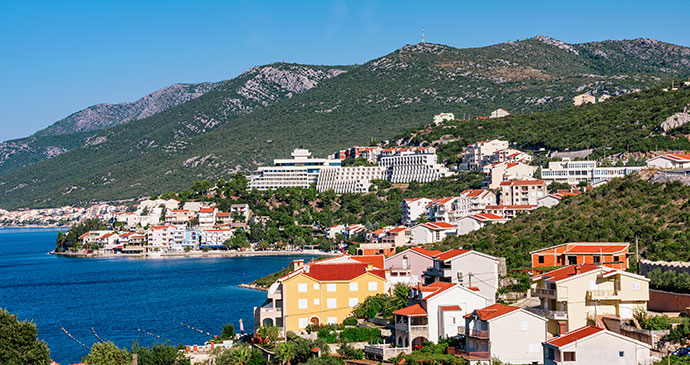 Bosnia and Herzegovina is proud to have its own little slice of the Adriatic, even if it is only a 24km strip.

Bosnia and Herzegovina is proud to have its own little slice of the Adriatic, even if it is only a 24km strip. The Adriatic Sea from Split to Dubrovnik is crystal clear and simply gorgeous, Neum included. The closed bay here, shielded by Pelješac Peninsula, is protected from many of the strong winds of the open sea. Most of the town was built during Yugoslav times as an isolated retreat for the communist elite.

Although Neum can’t compete with the likes of Dubrovnik, Ston and Makarska and is rather limited, it does offer good value for a seaside holiday. Some of the infrastructure is still run-down and even incomplete but year by year the tourist offer at Neum improves. During the summer months, it is quite crowded. This is not the place to go looking for a peaceful cove or empty beach. Its face has drastically changed since communist days, with the construction of Dalmatian stone homes and more modern architecture. The large hotels from the socialist era appear awkward in the serene setting of the Adriatic, and the newer concrete buildings lack an aesthetic touch. Tourists have been coming in larger numbers each year though. One will find room and board in Neum for up to 20% less than in its Croatian coastal counterparts, which is one of the reasons why many Bosnian families vacation here.