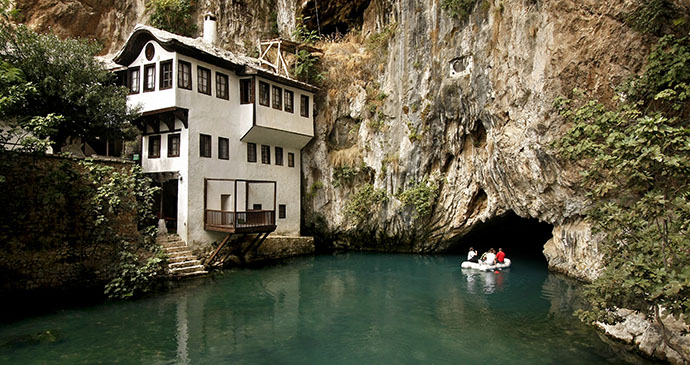 The beautiful setting of the tekija at Blagaj © Dan Tautan, Shutterstock

This is one of the best examples of the interconnectedness of Herzegovina’s cultural and natural heritage.

This is one of the best examples of the interconnectedness of Herzegovina’s cultural and natural heritage. Atop the mountain in Blagaj are the ruins of an ancient Illyrian fortification. The Romans added to the original structure, and by the Middle Ages it had become the castle of the ruling noble family of Hum. The Ottomans added even more to the large fort and the ruins stand witness to four civilisations that have at one time or another made Herzegovina their home. The tekija dervish house built at the base of a 200m rock face at the source of the Buna River is a magical place, blessed with the powers of both humans and nature. It was built in the 1500s for the dervish cults at the base of a 200m cliff wall. It now serves food, cold drinks, and Turkish tea and coffee in a beautiful garden overlooking the Buna source.