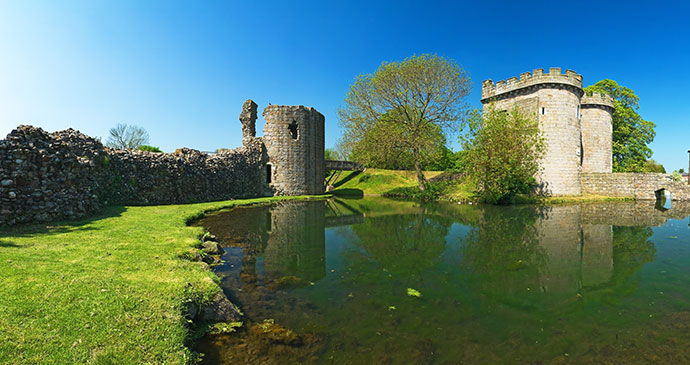 Stay awhile, enjoy the scenery, meet the alpacas. This is England, but with a uniquely Welsh twist.

Until the 1536 Act of Union, Oswestry belonged to Wales. Nearly 500 years later many people here still identify as Welsh: you’ll overhear lovely lilting accents all over the region and see road signs rendered in Welsh as well as English. Life in this fiercely fought-over border country is peaceful now, of course, although I’ve seen some ITV regional news footage from 1972 in which several shoppers insisted Oswestry was in Wales and were surprised, if not affronted, to be told otherwise. Spectacular views over Cymru can be found at the churchyard in Welsh Frankton and on Racecourse Common. On the fourth hole at Llanymynech Golf Club you can tee off in England and putt out in Wales.

Nevertheless, the temptation to describe Oswestry (or Croesoswallt, to use its Welsh name) as a gateway to Wales serves an injustice to the many attractions within the English border, especially the town itself with its lively café culture, Wilfred Owen heritage and exceptional hillfort. At Whittington you’ll find Britain’s first community-run castle, while the partially restored Montgomery Canal allows us to enjoy a horse-drawn cruise. This compact region has several special churches, including the black-and-white oak-framed St Peter’s at Melverley and St John the Baptist, the ‘tin tabernacle’ in Maesbury. We also have heritage railways. The Cambrian Heritage Railway has a museum in Oswestry and operates rides from the town as well as at Llynclys. At the time of writing the group working to revive Tanat Valley Light Railway was building a new platform in time for the railway’s 150th anniversary; operating dates will be listed at www.nantmawrvisitorcentre.co.uk.

So don’t go racing up to Chirk or overlook Oswestry on your way to Lake Vyrnwy. Stay awhile, enjoy the scenery, meet the alpacas. This is England, but with a uniquely Welsh twist.