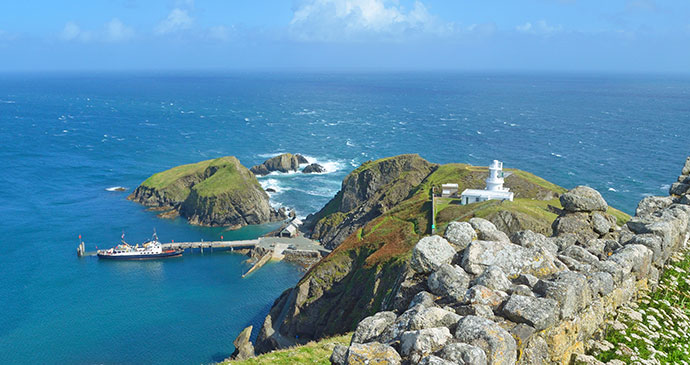 Why do people come to Lundy? For the character of the island itself, and the tranquillity that is found there.

Lundy lies about ten miles north of Hartland Point, where the Bristol Channel meets the Atlantic. It is a granite island three miles long and about half a mile wide, and with its wind and lack of trees feels, to the visitor, like a chunk of the Hebrides that lost its way.

Lundy lies about ten miles north of Hartland Point, where the Bristol Channel meets the Atlantic. It is a granite island three miles long and about half a mile wide, and with its wind and lack of trees feels, to the visitor, like a chunk of the Hebrides that lost its way. Lundy’s history is steeped in tales of piracy, plots, slavery, smuggling and general maritime skulduggery. Various owners, administrators and tenants are recorded from the mid 12th century onwards, among them Sir Richard Grenville of Revenge fame who acquired the fee simple of the island in 1577 from his wife’s kinsman Sir John St Leger, as repayment of a debt. After Grenville’s death in 1591 it passed to his son Bernard, who in 1595 was rebuked by the queen for not making greater efforts to prevent pirates from using it as a stronghold. Centuries later came the long tenure of the Heaven family (1834–1917), when it was often referred to as ‘The Kingdom of Heaven’. Then came the ownership of the Harman family, with Martin Coles Harman setting out to make the Lundy a ‘haven of peace and natural beauty’, when he bought the island in 1925. After his son Albion died in 1968 the future of the island looked bleak. In 1969, however, the National Trust acquired it after Sir Jack Hayward donated the asking price at auction. The Landmark Trust took on a 60-year lease and the responsibility to repair buildings, manage the land and employ the staff, and the island started to attract visitors. Today just over two dozen people live on Lundy – all employees of the Landmark Trust – and the island is established as a unique holiday destination.

While the sea and its shore abound with life, there are almost no indigenous terrestrial mammals on Lundy. The pygmy shrew is the only one, and can often be seen scurrying around properties and buildings in search of crumbs. 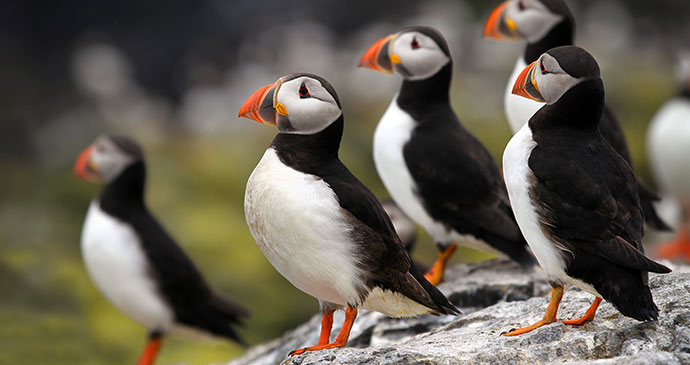 Since 1929 Lundy has had its own stamps (‘puffinage’), introduced by Martin Coles Harman, and for a while it also had its own coinage sporting Mr Harman’s head.

Archaeological interest ranges from Bronze Age huts and enclosures at the north end to ancient inscribed stones in the burial ground near to the Old Light. There are also the remains of the Victorian granite quarries on the east side. On and around Lundy there are no fewer than 14 Grade II listed buildings and 41 scheduled sites and monuments, plus two scheduled wreck sites.

Lundy is divided by three main walls: Quarter Wall, Halfway Wall and Threequarter Wall. Land in between these walls differs considerably; farmed fields round the village at the south end, rough grazing in the middle, and bare granite encrusted with heather and lichens at the north end.

Overnight visitors are well provided for, with self-catering properties owned by the Landmark Trust as well as facilities for campers, and the availability of winter transport by helicopter from Hartland means that the year-round occupation rate is high. The island shop is fully stocked to meet all visitors’ requirements, while the Marisco Tavern provides snacks and meals, and also functions as a social centre. There are no cars on the island, only farm tractors and a few Land Rovers. Dogs are not allowed on Lundy.

Why do people come to Lundy? For the character of the island itself, and the tranquillity that is found there. For birdwatching, rock climbing or diving; for interest in the plants, the fungi, the lichens, or the archaeology and history; for walking; or simply for a rest with a few good books. One thing is for sure – after one visit most people are caught by the Lundy spirit and return time and again to this special corner of North Devon.