Kyrgyzstan is a healthy place on the whole and although travellers should be prepared for any eventuality, you should not expect to fall ill here, excepting the odd bout of travellers’ diarrhoea. Nevertheless, all visitors to Kyrgyzstan should be in possession of adequate health insurance as state health care in Kyrgyzstan is rudimentary at best. Insurance is particularly important if such activities as trekking, horseriding or mountaineering are planned, and ideally should cover emergency medical repatriation.

There is a low-grade risk of malaria which is mostly due to Plasmodium vivax carried by female Anopheles mosquitoes. The risk is more common from June to October, mainly in areas bordering Tajikistan and Uzbekistan (Jalal-Abad, Batken and Osh provinces). Up-to-date advice on this situation and the need for prophylaxis should be sought from a doctor or travel clinic. At the time of writing, the risk is considered low enough to not need to take tablets but prevention with a DEET-containing insect repellent both day and night is always advised. In rural areas, and especially if cycling, dogs may be a nuisance and present the potential threat of rabies.

Although it is chlorinated, tap water is not of very good quality throughout the country and bottled or boiled water should be taken in preference. Thankfully freshly boiled tea is plentiful, abundant even, and perfectly safe to drink. Care should be taken with raw fruit and vegetables, particularly in the warmer months, and the standard recommendation to always peel or wash fresh fruit and vegetables is sound advice.

Cooked food such as meat stews that have cooled and have been standing around for a while may be more problematic, as might some of Kyrgyzstan’s dairy specialities such as kumys and kurut (dried yoghurt balls), which are sometimes plucked out of a horseman’s grubby pocket to be popped in the mouth of the appreciative visitor. Kumys – fermented mare’s milk – is generally not considered harmful (indeed many make claims to its health benefits), however, you should bear in mind that the fermentation process may not eliminate tuberculosis and it can upset the stomachs of those not used to its sour milk acidity and cause nausea and vomiting in the hapless visitor.

A full list of current travel clinic websites worldwide is available on ITSM. For other journey preparation information, consult Travel Health Pro (UK) or CDC (US). Information about various medications may be found on NetDoctor. All advice found online should be used in conjunction with expert advice received prior to or during travel. 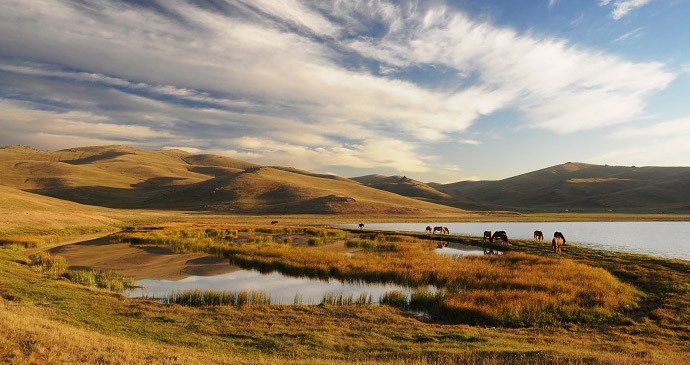 Most trips to Kyrgyzstan will be hassle-free, particularly when spending time in its countryside © Pavel Svoboda, Shutterstock

A few simple precautions will ensure that a visit to Kyrgyzstan is a safe and happy one. The countryside is mostly very safe in terms of human menace, although inebriated locals can sometimes be a nuisance. Larger towns, especially Bishkek, are another matter and caution should be taken after dark. At night the streets of all Kyrgyz towns and villages are generally pitch black with little – or nothing – in the way of street lighting and, putting the very real threat of tripping up over something to one side, there is a risk of mugging by locals whose resentment and coveting of the foreigner’s wealth is further fuelled by strong drink. It should never be forgotten that, compared with Europe and North America, Kyrgyzstan is a very poor country, and that most Western visitors walk around with more cash in their pockets than most Kyrgyz could possibly earn in a year.

An invitation to drink can be effectively the laying down of a gauntlet.

Alcohol undoubtedly poses a serious social problem throughout the central Asian region; a problem that first came with Russian colonial rule, was ignored and partly contained during the Soviet period, and has been exacerbated by poverty and a general lack of hope since independence. Remarkably, vodka is available more or less everywhere at rock-bottom prices, even where there is little in the way of food to buy.

Heartfelt Kyrgyz hospitality is a wonderful thing but in all-male company it can sometimes quickly turn into little more than a kamikaze drinking session. It is crucial that moderate imbibers realise there is no such thing as ‘a small one’, ‘a quick one’, or ‘just one for the road’. An invitation to drink can be effectively the laying down of a gauntlet. The guest will be expected to keep up with the other drinkers and will find it difficult to detach himself from proceedings once a session is under way. It is considered very bad form to turn down further drinks once engaged in a boozing session and refusal may be seen as a grave insult to the host.

The best policy for those lacking livers of steel is to politely refuse in the first place, perhaps making something up on health reasons. This will not be popular but it sets the tone and will be respected. If you start drinking, then you will be expected to continue to the dregs of the bottle … and then maybe another.

The outward face of women in the country – both Kyrgyz and Russian – is one of self-confidence, independence and even feistiness. Even if this is not really an accurate picture, women travellers face no particular dangers in Kyrgyzstan. Sexual harassment is thankfully rare but, even though Kyrgyzstan is far from being a strictly Islamic regime, it is still unwise or insensitive to dress scantily and in a provocative manner, despite the many young Russian women in the cities who do just that.

Travellers with a disability

Apart from a few concessions in the capital, Kyrgyzstan has almost nothing in the way of facilities for disabled travellers. Exploring even Bishkek in a wheelchair would prove to be a challenge given the lack of ramps and poor condition of the pavements. On a more positive note, the majority of restaurants are ground-floor based, which is a slight advantage, and Bishkek’s top hotels at least have ramps and reliable lifts. However, outside of the capital it would be unwise to expect any facilities whatsoever. For those disabled travellers planning to visit Kyrgyzstan, hiring private transport and a guide through one of the agencies listed here is a virtual necessity.

Sexual acts between persons of the same sex have been legal in Kyrgyzstan since 1998 but same-sex unions have no legal standing. Kyrgyzstan, although more tolerant than neighbouring Uzbekistan and Tajikistan where homosexuality is illegal, remains a conservative country and, while gay relationships may be tolerated, open displays of affection between those of the same sex are frowned upon and may provoke hostility.

Despite recent changes in the law homophobia is still commonplace and there have been some reports of blackmail of homosexuals by corrupt policemen. The north is generally more easygoing than the south, and Bishkek, where a small gay scene has developed with a couple of gay bars/clubs, is the most tolerant. An organisation called Labrys, established in 2004, is dedicated to improving the lot of lesbians, bisexuals, gay men and transgender people in Kyrgyzstan. The age of consent in Kyrgyzstan is 16.

Travelling with a family

Like most people throughout the world, central Asians love children and travelling to Kyrgyzstan with a young family in tow will definitely win points in terms of popularity with the locals. Having said that, there may be some problems concerning hygiene with very young children, and the sometimes rather limited food available might prove problematic with those young travellers who are fussy about what they eat. The typical home cooking of homestays, with plentiful fruit, jams and baked goods, is likely to be more popular than standard restaurant fare. Independent travel in Kyrgyzstan can be hard work at times, with long, uncomfortable journeys that have few rest breaks.

This type of travel is probably too onerous for the average child; hiring a car with a driver would be a much better bet, allowing regular breaks and toilet stops (although probably not toilets) and the opportunity to stop whenever something of interest is seen. Most children will naturally love some aspects of the country like its horses, plentiful wildlife and colourful markets, and the beaches of Issyk-Kul are also likely to be popular with most young travellers. On the other hand, few children will patiently spend hours examining Silk Road monuments or archaeological sites, and even fewer will be willing to spend long hours energetically hiking in the hills.