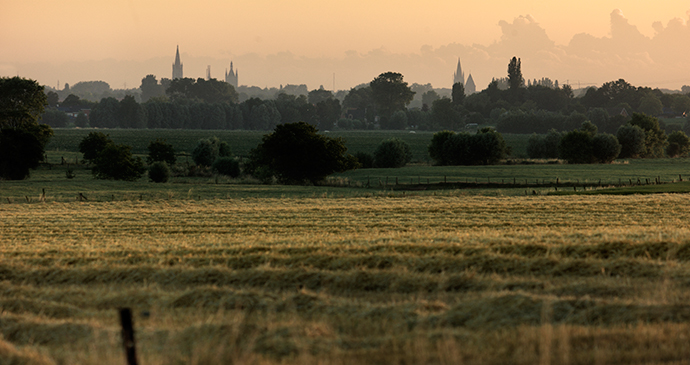 The skyline of Ypres rises above the surrounding countryside © Milo Profi, Visit Flanders

Ypres – or ‘Wipers’ as it was nicknamed by British soldiers – is a relatively small town with a very famous history. War arrived here on 7 October 1914 when 10,000 German troops entered the town, kidnapped the burgomaster, stole 62,000 francs from the city coffers and demanded the local bakers prepare 8,000 loaves of bread to feed the soldiers. The next morning they released the burgomaster and marched west towards Vlamertinghe. The Germans never entered the city again and residents felt safe enough to stay put until May 1915 when chlorine gas was deployed on the battlefields. As the war progressed, Ypres became a strategic defence point of the Ypres Salient and was battered by artillery fire. When locals returned at the end of the war, it was barely recognisable. It’s said you could sit on horseback and look over the town without a single building interrupting your view.

Understandably, the town and surrounding area is awash with cemeteries, memorials and museums dedicated to the Great War; here’s our pick of the most remarkable. 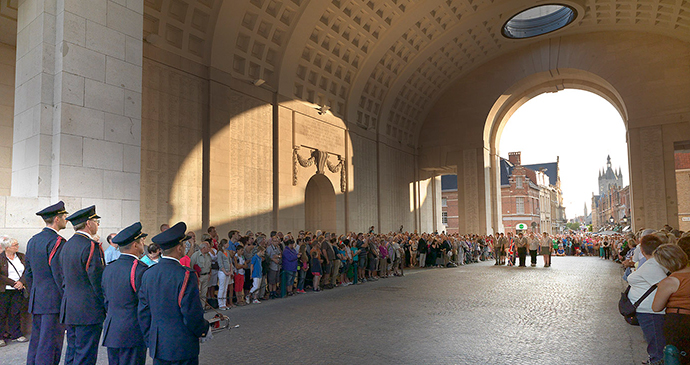 The Last Post has continued uninterrupted at the Menin Gate since 1928, except during German occupation in World War II © Milo Profi, Visit Flanders

Erected in July 1927,the Menin Gate marks the spot where soldiers would leave town on their way to the Front Line. Carved into the interior walls are the names of 54,896 British and Commonwealth soldiers killed in World War I and whose graves are unknown. 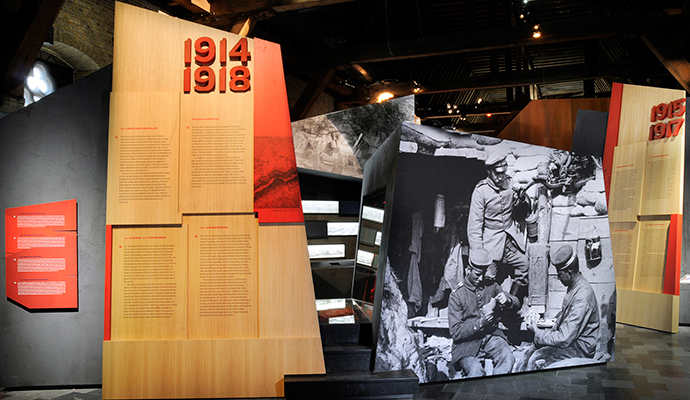 Located on the second floor of the Lakenhalle, this high-tech museum centres around the ‘poppy bracelet’. It’s issued to you on arrival and then you input your name and place of birth and the computer selects personal stories of people from your town or county who participated in the war. You’ll then be able to print or email the stories to your smartphone and create an itinerary to visit the areas where they fought. 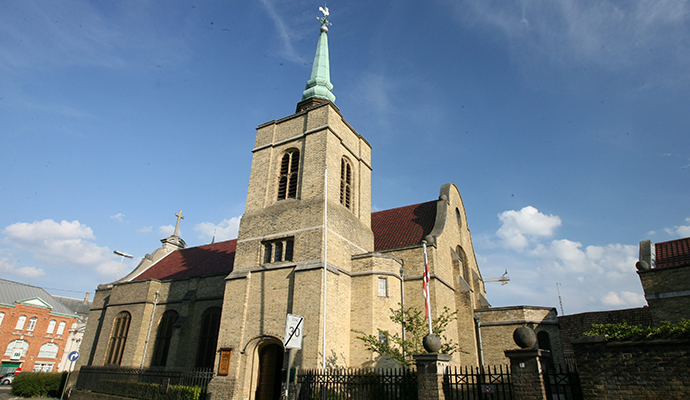 This unassuming church was designed by Sir Reginald Bloomfield – the architect responsible for the Menin Gate – in 1929. It’s filled with brass plaques honouring fallen soldiers and furniture donated by the victims’ families.

It was here that John McCrae penned In Flanders Fields in 1915 © Wesstoer, Visit Flanders

Two kilometres north of Ypres city centre, the Essex Farm bunker sat 1,800m from the Front Line and was used as an Advance Dressing Station (ADS). It was here on 3 May 1915 that Canadian surgeon Lieutenant Colonel John McCrae penned one of the most notable poems of World War I, ‘In Flanders Fields’ after witnessing the death of his friend Alexis Helmer the day before. 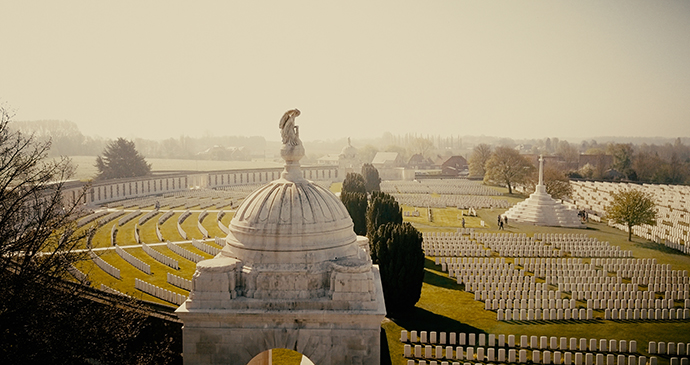 Tyne Cot is the world’s largest Commonwealth war-grave cemetery and the final resting place for 11,954 souls. The sight of its uniform graves stretching into the distance is utterly humbling. Over 70% of them belong to unidentified British or Commonwealth soldiers and bear the words ‘Known unto God’. 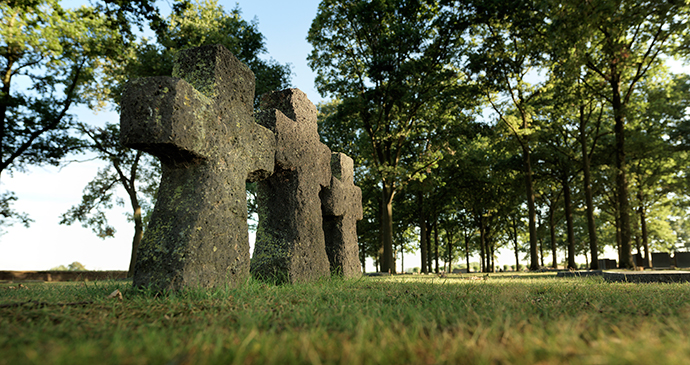 Dotted with oak trees – the national symbol of Germany – Langemark is one of four German cemeteries left in Flanders. Inside the entrance arch, carved into oak panels, are the names of the Student Soldiers: university students who volunteered to join the war, but were only given six weeks’ training before being sent to the Western Front – often to the worst parts. 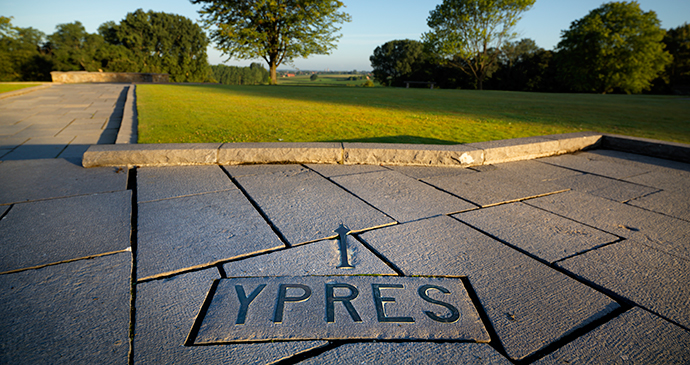 This superb privately owned museum is one of the few that doesn’t sanitise the war. The land belonged to a farmer, who left the British trench system and shell holes in place when he returned after the war. It’s one of the last original trench systems to survive; most have been filled in. 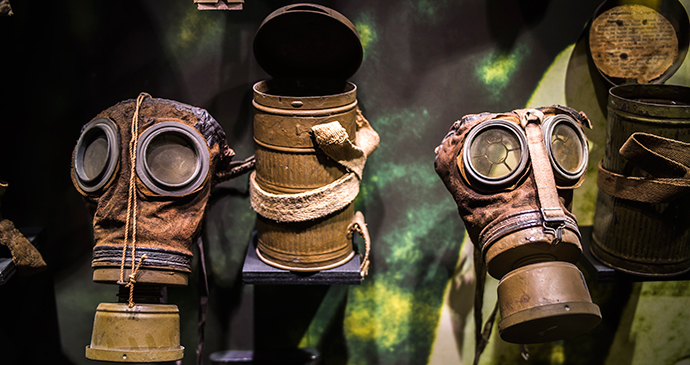 Gas masks on show at this fascinating museum © Visit Flanders

Inside Kasteel Zonnebeke, a 1920s mansion, this museum has a collection of weaponry, uniforms and an immersive trench ‘experience’ complete withcorrugated-iron walkways, bunker rooms, dimlights and war-sounds soundtrack.

Want to find out more about the memorials in the Ypres region? Learn more in our detailed guidebook to the battlefields: