Climate
When to visit 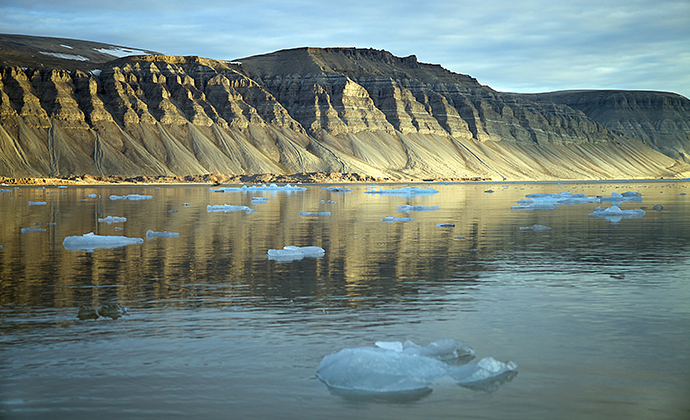 The climate of Svalbard is determined by three main factors: its northerly position (causing the extremely cyclical annual supply of light and warmth from the sun); the strong influence of the surrounding ocean currents; and the winds.

There is a popular misconception that the Arctic is an area abundant with snow. This is plainly untrue. In fact, the highest Arctic is most often a cold desert, with Peary Land in northernmost Greenland as a good example. Even on a physical map of the whole Arctic, it is clear that Peary Land is mostly free of ice, in contrast to the huge ice cap further south.

Though on a smaller scale, this similarly applies to Svalbard: here, too, there are only a few glaciers along the north coast which manage to reach the sea, and central Svalbard, too, more sheltered against wet clouds from the west, is only modestly glaciated. The reason for this is not too warm a climate but because of the fairly low quantities of precipitation, and thereby also snow.

Apart from the damper west coast, Svalbard has a dry, steppe-like climate, sometimes with less than 200mm precipitation per year (including snow) in central areas. In lower latitudes, this small amount of water supply would be insufficient for most types of agriculture without additional irrigation. Accordingly, the wintry snow cover is thin, accumulating gradually from October and reaching its maximum usually in April – but even then, larger stones peek through the thin white layer in many places, and especially on slopes.

Furthermore, a large part of the snowfall is redistributed by wind. Some open coastal plains or plateaux, and also exposed slopes and inland valleys which channel katabatic winds rushing down from glaciers, can be blown almost free of snow. Some of the snow is blown out on the sea, but much accumulates on the leeside of ridges, filling up deep riverbeds and many glacier crevasses. Therefore, you may find a coast almost free of snow, and half a kilometre behind you can almost drown in deep soft snow in a sheltered valley.

Even in deepest winter, thaw periods or even rainfall are possible, too. As the ground is frozen, these milder periods will inevitably result in extensive slippery ice layers, especially on surfaces with little or no snow cover, partially hardening the snow surfaces. Statistically, April and May are the driest months of the year.

From the second part of May onwards, precipitation is more likely to be rain than snow, even though wet snowfall is possible even in July and August (though it normally melts again within hours, at least in the lower regions).

In summer, precipitation is low, too – which is good for outdoor activities. This does not necessarily mean blue sky and no rain, but heavy rainfall lasting more than a day is the exception rather than the rule. More typical are some drizzle or shorter showers, and wet fog.

To the surprise of many – we get a lot of requests for dog-sledging or snowmobile riding in July and August – the lower parts of the country at least become free of snow over the summer, permitting a limited and fascinating tundra vegetation period. The thaw period usually starts in May, though there are wide variations.

Low levels of precipitation do not necessarily mean sunny weather; more often than not skies are overcast. Rain and snow do not normally last long and do not amount to much. It is worth noting, though, that the cloud cover is often very low, and on many slopes and passes it is easy to lose your bearings in the grey conditions. In a wintry white landscape, low clouds or thin fog quickly lead to white-out conditions where you feel as though you are floating in a pale grey cosmos without any contrasts, unable to recognise terrain features even from a short distance.

This is not necessarily because of poor visibility but because of a complete loss of any distinguishing topographical features so that it is impossible to determine whether the terrain in front of you is flat or steep. Under such circumstances, you may be forced to halt even if you have a rough idea of your orientation thanks to a GPS or compass and map, as these cannot tell you about minor obstacles which may be hidden in the white-out right in front of you.

It is striking how clear the air is during good weather: even from the shore you can sometimes see as far as 150km. This makes distances seem so much shorter and canoeists, in particular, should study their maps carefully or they may underestimate the distance to their destination. The clear air makes it possible for landscape photographers to use extremely powerful telephoto lenses.

However, fog can develop, frequently and very suddenly, especially in the mountains. This presents a real danger to the inexperienced traveller. Be certain that you know how to put up an emergency bivouac and familiarise yourself with your compass, maps and the territory. It is well worth building extra contingency days into your plan. One July we were trying to cross a 900m crest when the fog came down, temperatures dropped to –8°C and a severe snowstorm began. In these conditions, an emergency bivouac seemed just as risky as blindly carrying on or trying to backtrack along the steep path which had begun to freeze over. We needed to get down into the valley as quickly as possible.

Luckily I knew about another route from a previous expedition. Even if hikers, or the group leaders at least, have orienteering ability, maps and compasses cannot replace sound local knowledge, particularly as maps cannot show every detail of the terrain.

In poor conditions it is more sensible to await improvements in the weather. This should be kept in mind when making preparations and arranging provisions.

The majority of people who visit Svalbard understand that they are not the first to set foot in the archipelago, and that upon arrival they will indeed come across an airport, a coal mine, some restaurants and even, perhaps, other humans. They will have heard about environmental problems (holes in the ozone layer, marine pollution, sunken nuclear submarines). Yet there remain a good number of visitors who arrive expecting to find a completely untouched paradise. This Svalbard is not. Those who believe that Svalbard is made up of 62,500km² of untouched wilderness are going to be disillusioned and disappointed when they catch a glimpse of their first car park (following their arrival in a comfy plane), a land blackened with coal dust alongside to the airport, and a gaggle of construction work areas. Whoever has Christiane Ritter’s A Woman in the Polar Night in his or her head, with its trappers and dog sleds, is going to be surprised by the sight of computers, iPhones, kids on mopeds and other signs of contemporary civilisation. Even in the countryside there are signs of man, his tracks and his rubbish. The fascinating thing about Svalbard, though, is that those tracks could well be 50 years old and that tin might even be 70, both delicately preserved in the unforgiving Arctic atmosphere.

The bottom line is that Svalbard is neither Disneyland, aiming to realise the dream of its visitors, nor an open-air museum. It is a part of our modern world, despite its relative remoteness from it, and the inhabitants of Svalbard do their best to live a normal ‘Western’ life just like you. Though you might find yourself gawking at them from time to time thinking, ‘How on earth do you live here?!’, they are not exotic creatures there to be studied. And they appreciate good manners as much as the rest of us. They don’t take kindly to hikers using a cosy restaurant as an old hut, walking around with muddy boots on, lounging around in filthy clothes, putting dry smelly socks on radiators or laying out their moist sleeping bags. Nor do they particularly care for tourists who find an open cabin and decide to move in for the night, using the equipment and fire material they find there without permission from the owner. Unfortunately, because of the archipelago’s remote, untamed, ‘frontier’ reputation, some visitors bring with them to the Arctic the manners and attitude of the ‘Wild West’.

If, however, you come to Svalbard with reasonable expectations, are properly prepared and show respect for both the fragile Arctic natural environment and the locals’ way of life, you will be wonderfully surprised by your time on the archipelago. And hopefully you will leave very little sign that you have been there, except for the experience and memories that you will take away with you. 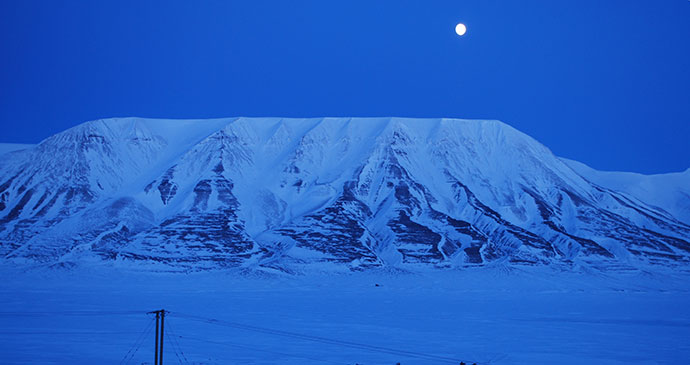 The polar night can be a special experience © PaterMcFly, Wikimedia Commons

One of the most common questions one gets asked as a tour operator in Svalbard is ‘When is the best time to travel?’ Well, there is no general answer to this question – the best season depends primarily on your interests. Each season is different, with its own advantages and disadvantages, and all one can offer is a broad outline. When is best also depends on one’s national and cultural background: to the surprise of most non-Norwegians, the best-booked season is not summer but spring, the so-called fifth season when it’s still wintry but already bright all around the clock, when Scandinavians have Svalbard almost to themselves. The polar night can be a special experience, and naturally the summer is prime travelling time, for many reasons.

It may be easier to name less favourable seasons, at least for those interested in outdoor activities: these are likely to comprise late September to mid-December, mid-January to mid-March and mid-May to mid-June.