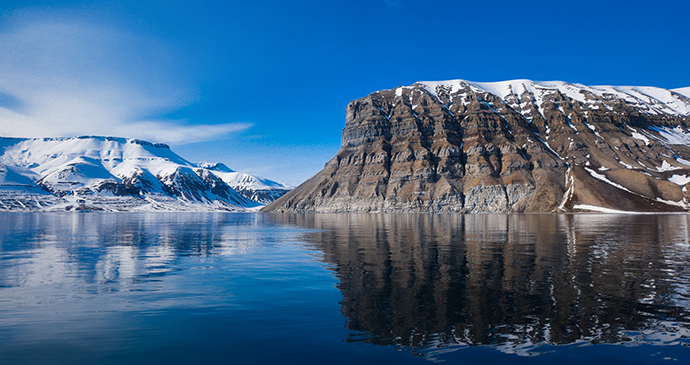 This archipelago is the largest area of wilderness in Europe © Ginger Polina Bublik, Shutterstock

The archipelago offers maybe the widest variety of Arctic nature – extremely varied landscapes, low to High Arctic, different ecosystems – within its relatively limited area, especially when compared to the vast stretches of Greenland, northern Siberia or the American Arctic.

Spitsbergen, Spitzbergen, Spetsbergen, Spitsberg – this remote archipelago is a rather unusual and indeed unique place of interest. It is the largest area of wilderness in Europe, holding few historical human traces and even fewer settlements today. On the other hand, the archipelago offers what is perhaps the widest variety of Arctic nature – extremely varied landscapes and ecosystems, encompassing both Low and High Arctic – within its relatively limited area. In terms of both its ancient (geological) and contemporary (human) history, too – again, in spite of the archipelago’s rather diminutive size – Svalbard is without doubt one of the Arctic’s most fascinating places: its surprisingly easy accessibility (despite a seriously extreme northerly position) allows connections from a wide range of countries at considerably less cost than to other islands at similarly high latitudes around the Pole. A variety of migrants from several nations is also reflected in the many place names that pepper maps of the archipelago – even in the different names for the archipelago itself. This diversity is a testament to the extremely international nature of Svalbard – environmentally, geopolitically and in everyday life.

And yet this ease of access creates a challenge with respect to the conservation of the fragile Arctic nature and the scarce traces of polar history. Human activities such as whaling, hunting, mining and fishing have already depleted, or are on the verge of destroying, important, irreplaceable resources on and around the archipelago, with potentially serious side effects. In recent decades, a growth in Arctic activities such as adventure tourism, and even scientific research projects, have had an increased impact on Mother Nature. The visible effects are often multiplied several fold in the more remote parts of the region. Norway, for its part, has taken on the ambitious goal of making Svalbard one of the best-managed wilderness areas of the world, with emphasis on environmental issues. The country’s aim is two-fold: firstly, that the archipelago be so well protected that the traces of human impact become negligible, and secondly that the lands serve as a reference point for a true, unchanged Arctic nature, and a role model for other nations with such pristine territories. Strict regulations, particularly regarding tourist activities and behaviour, have been introduced as one important step to secure this aim – at least on land. Yet the main element of Arctic nature – its marine environments – which have much influence over the altogether more spartan life on land, remain somewhat less protected on account of the strong fishing lobby, thriving cruise tourism industry, Norwegian oil interests and the looming geopolitical importance of future Arctic shipping routes.