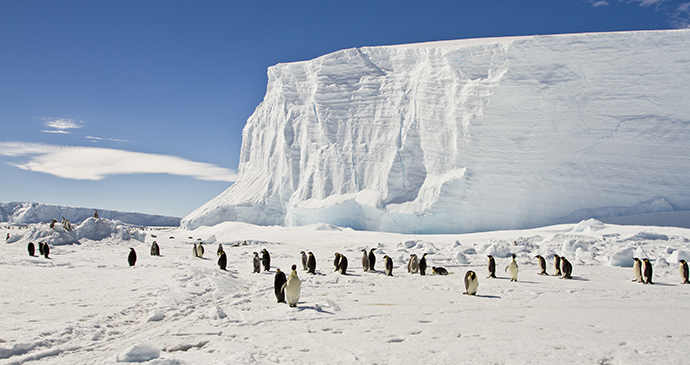 Emperor penguins are one of many penguin species found in Antarctica © Sergey 402, Shutterstock

Antarctica is the coldest, windiest, driest place on earth. Two thirds of all our planet’s fresh water is locked up there in the form of ice in a continent twice the size of Australia. It is the world’s highest continent, with more than half of the land over 2,000m (6,560ft) above sea level. The ice on top reaches to 4,200m (14,765ft). Only a few nunataks show as bare rock above the sheet of ice which covers 99% of the land; only around the coast are there exposed areas where birds and seals may breed. Mean annual precipitation is less than 12cm (43⁄4in), all falling as snow to perpetuate a polar desert. It is the region of most active glaciation in the world.

This harsh physical environment is plagued with katabatic winds which spring up without warning and roar down glacier valleys at anything up to 200km/h (120mph). The windchill effect can be numbingly serious. Unlike the Arctic, which is an ocean surrounded by continents, the Antarctic is a continent surrounded by ocean – the Southern Ocean. Between latitudes 40° to 65°S an uninterrupted wind circulates vigorously to develop into the notorious ‘roaring forties, furious fifties and screaming sixties’ – the West Wind Drift. Around the coast there is a contrary circulation in the East Wind Drift. The interaction between these winds and sea currents creates a region of turbulence and as a consequence the Southern Ocean is richly productive, its abundant plant and animal plankton sustaining large numbers of seals and whales, some of which are slowly recovering from exploitation and abuse, as well as many millions of seabirds.

Most Antarctic life clings to the edge, where beaches and cliffs offer snow-free nesting places for birds and pupping places for seals. Much of it is concentrated on the islands – the sub-Antarctic islands and the islands of the Antarctic Peninsula, that last fling of the Andes which extends as a string of islands reaching out into the South Atlantic before swinging round to form a backbone attached to the great Antarctic continent. The backbone is bordered by a necklace of islands which are home to millions of penguins, petrels and seals in the summer season. 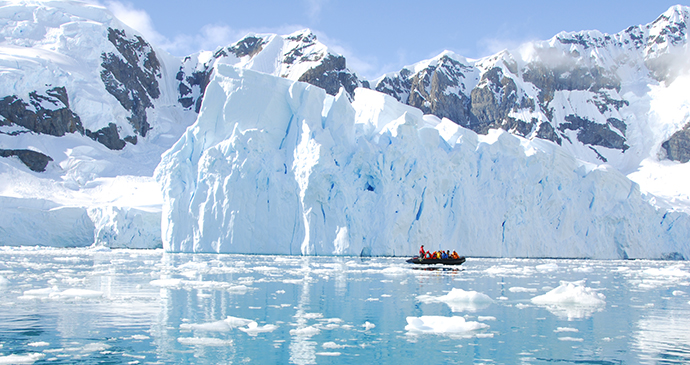 Those who brave the harsh conditions are rewarded with a memorable experience © Matt Berger, Shutterstock

Winter is a different story. At the end of March, at the South Pole, the sun sets on six months of icy darkness. As the sea freezes out from the continent’s edge at the rate of five kilometres (over three miles) a day, the solid surface doubles. Only Weddell seals and emperor penguins are hardy enough to survive these dark days. Even on the coast the temperature will fall below –40°C. Only the more northern sub-Antarctic islands remain free from sea-ice. Most creatures move north, returning only when the sun shows its face again in the austral spring.

It is possible to get very close to the animals which live here, but important not to overstep the mark. Disturbed penguins make easy prey, and less inhibited birds like skuas or gulls are quick to take advantage of an unguarded egg or chick. Mosses and lichens take a long time to grow in this climate; try not to walk on them unnecessarily. The IAATO guidelines make a lot of sense; it is vital that visitors to this magical place subscribe to them. And it is equally important that many of us go there – to enjoy and wonder at the sheer beauty and abundance of the place – because that will produce a body of enlightened ambassadors, our best guarantee that this mighty wilderness will endure.