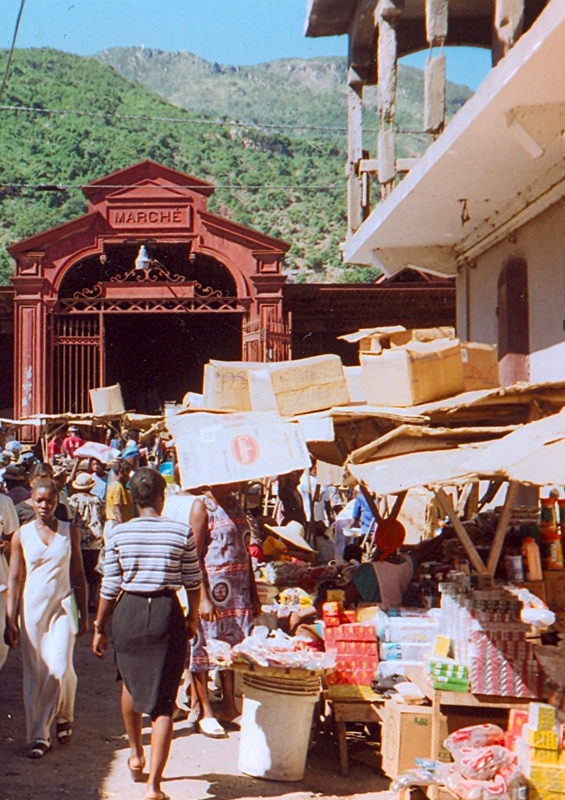 Haitian cuisine is an interesting blend of African and French influences, with an occasional taste of hot peppers thrown in for a Caribbean twist. Eating out is typically an unceremonious affair, at a ‘bar-resto’ or quite possibly served up in a polystyrene food box on the street by a woman cooking several pots over a charcoal brazier. Port-au-Prince (especially Pétionville) has the fanciest restaurants with a wide variety of cuisines, although elsewhere there’s not much international food besides burgers, pizza and spaghetti. All the more reason then to stick to Haitian cuisine – manje kreyòl.

If Haiti has a national dish, it has to be rice slowly cooked with beans and served with stock or sauce. Diri ak sos pwa, as it’s locally known, is everywhere, and you’ll eat a lot of it. The sauce, called bouyon or ragu, is almost always a stew with some potato, onion and tomatoes, spices and preferably meat of some description. This can be beef (bèf), goat (kabrit) or chicken (poule). Legim is a stew containing just vegetables, although vegetarians should note that meat is often used as a flavouring in the stock. Plantain (bannann) is a common accompaniment, either sliced and fried, or stewed. Other starch vegetables to look out for are yam (yanm) and militon (a type of squash).

An unexpected addition to Haitian cuisine is the influence of Arab dishes brought in by Syrian and Lebanese immigrants in the early 20th century.

A variant on rice and beans is diri djon djon – tiny dried mushrooms are cooked with the rice, turning it black but imparting a great flavour. Avocados (zaboka) make a good accompaniment to almost any meal. Their size and creamy yellow-green flesh put modern supermarket varieties to shame.

Soups are popular. Most famous is soup jomou (sometimes also called soup giramoun) made with pumpkins and eaten every 1 January (Independence Day). Also common is mayi moulen, a thick cassava porridge, served as an accompaniment to a main meal, or a countryside staple.

An unexpected addition to Haitian cuisine is the influence of Arab dishes brought in by Syrian and Lebanese immigrants in the early 20th century. Most notable is kibbeh – ground beef and bulgur wheat made into balls and fried. Haitian tastes have added a little more spicy heat to the traditional recipe. Spaghetti is widely available, although it has been adopted almost exclusively as a breakfast dish, often with herring and ideally served liberally covered in tomato sauce. Most hotels will offer eggs and bread as well. Local guava (gwayav) jam is excellent, as is the peanut butter, served straight (mamba) or with a hint of chili (mamba piman).

There are plenty of good and cheap street food options for quick eating, mostly falling under the umbrella of fritay, or fried food.

For a country with such an extensive coastline, it’s no surprise that seafood is plentiful. Anywhere near the sea you can find plenty of fish (pwason), lobster (woma) and especially conch (lambi). However, note that lambi populations are collapsing across the Caribbean region owing to over-fishing.

There are plenty of good and cheap street food options for quick eating, mostly falling under the umbrella of fritay, or fried food. Pieces of chicken, beef (tasso, rather than bèf in this case), fish or goat are fried up, but tastiest of all is griyo, or fried pork. Vegetarian options include marinad (fried dough balls), accra (fritters of malanga, a starchy root vegetable), and the ubiquitous bannann pese (fried plantain). Fritay is best accompanied with a spoon of pikliz – cabbage and carrot slaw made with chili-spiced vinegar. Plantain is also thinly sliced to make a local equivalent of potato chips, called papite, sold in small bags, often with similarly prepared breadfruit (lanm veritab). Another good snack to eat on the go is pate, small savoury pastries with meat, fish or chicken.

Fruit juices are very popular. Best of all is shadek, made from the Haitian grapefruit, and sweeter than regular grapefruit. In season look out for grenadya (passion fruit), seriz (cherry), as well as zoranj (orange). A colder option than a straight juice is a fresco made with juice syrup poured over shaved ice. Sold in the street, a fresco cart is invariably surrounded by a small swarm of bees.

Treated water is widely available, and is provided free in restaurants. You can buy small bottles everywhere (local brands include Crystal and Aquafine), while the Culligan brand has become synonymous with treated water, and is frequently used as shorthand for the five-gallon containers that most treated water comes in. On the street, you’ll also see vendors selling small sachets of treated water. Do not drink the tap water.

Best of all the fresh juices is shadek, made from the Haitian grapefruit, and sweeter than regular grapefruit.

Coffee is grown throughout Haiti, and is almost uniformly excellent – rich in flavour and lacking in bitterness. Of the locally available brands, Café Rebo and Café Selecto both offer good blends. In the country (and a few guesthouses, if you’re lucky), people grow and roast their own.

As befits any Caribbean country, Haitians are proud of their rum (rhum). The most celebrated brand is Barbancourt, a double-distilled dark rum made from local sugarcane (not molasses, like many rums), and a noted Haitian export. Barbancourt produce a very drinkable three-star rum (aged four years), an even smoother five-star (aged eight years) and an eye-wateringly expensive 15-year reserve. Also available is the slightly cheaper rum produced by Bakara.

Haiti offers a reasonable selection of accommodation, yet for the most part finding somewhere to sleep is going to bite into a sizeable proportion of your budget. There’s a dearth of good, cheap hotels, and you have to hunt around to find value for money. Paying US$80 for an adequate room isn’t uncommon, and paying a lot more for something really decent even more so. As such, even the budget listings included in our Haiti guide are higher than would be expected. As you range from moderate to upmarket, there are some excellent hotels. Although rates listed are for double rooms, some places list rates for the room, and either don’t distinguish between single and double occupancy, or more rarely, assume that a double means two double beds in the room. Where possible, prices include the 15% tax added on to most bills. Breakfast of some sort is normally included.

As a rule, rooms come with bathrooms. Most places offer air conditioning unless they’re in the shoestring category, though even at that price you’re likely to get a fan of some sort. The efficacy of any sort of air cooling is dependent on Haiti’s less-than-reliable electricity supply. At the bottom end of the spectrum, this may well mean frequent power cuts, while the more you spend, the better your electricity.

Haiti offers a reasonable selection of accommodation, yet for the most part finding somewhere to sleep is going to bite into a sizeable proportion of your budget.

Some hotels add on a fuel surcharge to cover generator costs; others may only run their generators at set hours. No matter the level of your accommodation, however, having a torch or candle to hand is never a bad idea. Wi-Fi is standard in most hotels, except at the cheapest end of the spectrum. Bed nets to ward off biting insects are the exception rather than the norm.

Shoestring and many budget hotels operate on an hourly as well as a nightly rate. This doesn’t automatically mean that they are brothels; many couples take rooms on a short basis because privacy is otherwise hard to find, and such hotels can be as clean and well run as any other. You’ll know if you’re in a hotel like this if the receptionist asks you if you want a room for a night or just un moment. Mirrors on the ceiling can also be a giveaway.

A notable shoestring option are the number of private guesthouses, often catering to Church mission groups and volunteers. A good, if basic, alternative to hotels, they can be highly sociable as meals are taken together (half-board is the standard). Many operate under a strong Christian ethic (which can include a night curfew), while others are more relaxed about their guests, making these a good way of easing the pain that hotels can inflict on your wallet.

There’s no real seasonal difference to prices, except at holiday times. The most notable instances are at Jacmel during Carnival and any beach hotel during Fet Gede at the start of November, which is often wrapped around a long weekend. In both cases, booking as far in advance as possible is advised, and some hotels may insist on a minimum number of nights to confirm the room.