Dominica has a tropical climate with average daytime temperatures typically ranging from around 26˚C in January to 32˚C in June. Rainfall can be very heavy and sustained, especially on the Atlantic coast and in the mountainous interior of the island. Average annual rainfall is around 700cm in the interior and 100cm on the west coast. Most of the rain arrives with trade winds from the Atlantic, resulting in frequent showers on the east, or windward coast, heavy and persistent rainfall inland, and lighter showers on the west, or leeward coast. The period between July and December is when Dominica is usually at its wettest and is also the time when it becomes most vulnerable to tropical storms and hurricanes. The driest and sunniest months tend to be from December to June but showers should always be anticipated and some parts of Dominica are wet all year round. The combination of heat and water can also make the island very humid, though breezes from the trade winds often help to make humidity levels a little more bearable.

Hurricanes that have the potential to impact Dominica tend to develop from tropical depressions in the Atlantic Ocean to the southwest of the Cape Verde Islands. They are essentially the rains and storms of the African monsoon season that make it all the way across the continent to the west coast and then into the Atlantic. If sea surface temperatures are warm enough and atmospheric wind shear low, then these disturbances can develop into tropical storms and hurricanes that track westwards to trouble the Caribbean, Central and North America. Historically, the Atlantic hurricane season is usually at its peak, and most threatening to the Lesser Antilles, during the months of August and September. The two worst storms to affect Dominica in recent times were Hurricane David in August 1979 and Tropical Storm Erika in August 2015.

Tropical Storm Erika was very little by way of wind, but the volume of rainfall caused widespread devastation. Countless land- and mudslides fell rapidly down steep hillsides and mountain slopes; streams and rivers became raging torrents of water, mud, rocks, boulders and trees. Many roads were damaged by rivers and numerous bridges were swept away, while other routes were blocked by huge landslides. The villages of Delices and Boetica in the southeast were cut off for months after the Boetica River flooded and ripped out earth and road, creating a deep, wide gorge that could only be passed on foot and with rope and pulleys. The villages of Coulibistrie, Dubique and Petite Savanne were severely impacted, the last so much so that it was not only evacuated, it was also officially abandoned. In that village alone, 18 people are believed to have died; at the time of writing, only six bodies have been recovered.

The travel sector upon which Dominica is so heavily reliant was impacted badly but is beginning to recover as travellers are gradually returning. Coming here is the very best way you can help this little island, and certainly more direct and transparent than donating money to its government. As a traveller to Dominica in 2016 and beyond, you will hardly be affected by the aftermath of this particular natural disaster. All roads except those running through Petite Savanne in the southeast are passable again, and hiking trails and natural attractions are open. 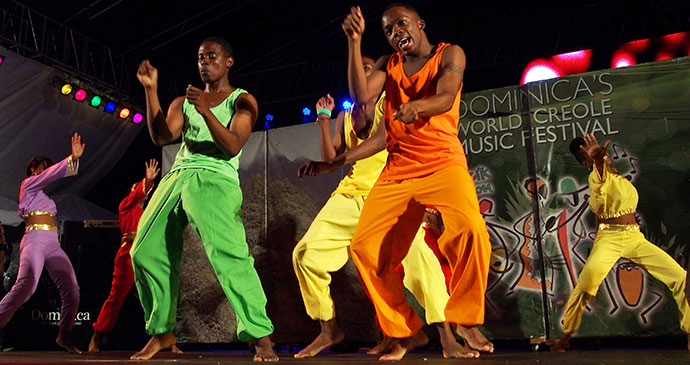 Dominica is never overrun with tourists (‘If only it were!’, scream some) but the ‘busiest’ time of year is the annual cruise ship season which starts fitfully in October and peaks in December through March before limping to a halt by the end of April. During this period around 200 cruise ships will call at Roseau and occasionally Portsmouth. On some days there may be no ships at all, on others there can be two or three, even four offloading at the Bay Front, the ferry terminal or the port. Convoys of buses and taxis taking these day-visitors on island tours mean that some roads become congested and some of the more accessible sites get rather crowded with people who may not be entirely sure where they are. It is also more difficult to catch a public bus as many drivers drop their loyal passengers and village routes in favour of the more lucrative cruise ship tour business, meaning you’ll often see school children enduring long treks home or people laden with shopping bags or low-pressure gas bottles trying to hitch a ride by the roadside. Roseau becomes a little more crowded with meandering, often disorientated tourists looking for something interesting to photograph, or searching for the Botanic Gardens with out-of-date photocopied island maps they picked up on the ship, occasionally pausing to take selfies while trying to avoid being run over by traffic that seems to come from every direction and never end. It is a lively time of year on the island and, whatever its pros and cons, very many Dominicans depend on cruise ship tourism for a living.

Creole Week and Independence celebrations take place in the latter half of October and the beginning of November. At this time you can usually see traditional costume parades and cultural shows, and enjoy regional and local music events such as steel pan, Creole in the Park and the World Creole Music Festival. Creol Week (usually the last week in October) is especially busy and droves of visitors from the neighbouring French islands of Guadeloupe and Martinique arrive by ferry for the festivities. If you plan on coming to Dominica at this time of year then consider booking early as flights, ferries and accommodation book up quickly.

Carnival preparations and events start in early January and reach their peak on the Monday and Tuesday before Ash Wednesday. On an island of seemingly endless parties and fetes, Dominicans and visitors can enjoy uninterrupted days of around-the-clock festivities during the Carnival period. Many Dominicans love and look forward to absolutely any reason to ‘fete’ and this is the biggest excuse of all. There is much to enjoy and experience during Carnival, even if you are not a rum drinker: street parades, Carnival Queen and Calypso Monarch competitions, live music, dancing, and plenty of street food. Though it is certainly not on a par with Rio or Trinidad, Dominica’s version of Carnival is a colourful and lively time to be on the island.

The weather from January to June grows hotter and the rains eventually peter out during the dry season. April, May and June are great months for hiking the interior and climbing the high peaks as cloud cover is usually minimal and views across the island are often unrestricted. Trails, though in places wet all year round, become a little less so at this time of the year and rivers and waterfalls are far more predictable.

The Atlantic hurricane season starts in July and ends in November, though it usually peaks in the Caribbean region in the months of August and September. Hurricanes begin life on the west coast of Africa or mid-Atlantic and make their way westwards towards the Caribbean and the Gulf of Mexico. Whether tropical depressions become tropical storms and then develop into hurricanes is down to sea temperatures, high and low pressure areas, Sahara dust and wind shear. Due to the island’s vulnerability during this period, August and September tend to be very quiet months and many hotels and tour operators choose to close and take a holiday themselves.

From October to December the weather is usually changeable, and often rainy. Days of clear skies and sunshine can be followed by an equal number of days of downpour and squall. But whatever time of the year you decide to visit, you should always prepare to get wet. Consider it part of the experience! Tour operators like to call it ‘liquid sunshine’ but make no mistake, it is rain, and it can be heavy. Dominica’s mountainous, rainforest-covered interior is lush and green for a reason. 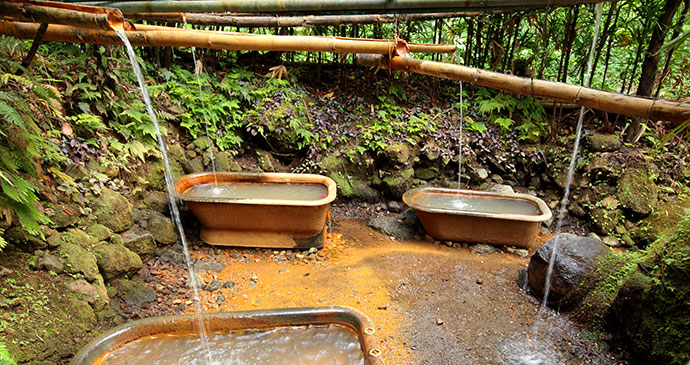 Getting to Dominica is no easy feat and it’s not always possible to do it in a single day. You may have to overnight in Antigua, Barbados, St Martin, Guadeloupe or Martinique – it all depends where you are coming from. Often when people consider coming to Dominica they think about their connecting flight first, then their long-haul flight, and then somewhere to stay. Believe me, you really have to want to come here; but it is worth it!

Although Dominica does have beaches, that’s not the reason you come here. You come to get wet, muddy and sweaty; to free up and feel alive. So if you’re looking for all of this with a side of powder-white sand beaches, fine dining and cocktails at sunset, I would recommend making your stay on Dominica part of an eastern-Caribbean multi-destination holiday. Travellers come to Dominica for its dramatic, unspoilt and diverse natural habitats. Its cluster of nine active and dormant volcanoes and swathes of undisturbed rainforest make it unique to this region. This means it is an island for travellers who enjoy nature and the great outdoors. Its vast network of hiking trails are the main draw. The 200km Wai’tukubuli National Trail is a trek without equal in the eastern Caribbean and the island’s signature hike, the Boiling Lake Trail, is on most hikers’ bucket lists.

Dominica is also a popular destination for scuba divers and natural science enthusiasts. The island has endemic reptile, amphibian and bird species, sperm whales can be seen all year round, and the coral reefs and marine life are pristine and diverse.

In the interior, try the Boiling Lake hike followed by a swim up Ti Tou Gorge and then a hot sulphur bath at Wotten Waven to work on those tired and aching muscles. Dinner in the Roseau Valley; try Papillote Wilderness Retreat or River Rock Café. On another day, climb Morne Trois Pitons and follow it with a cool down at Mero Beach, where there are several nice places for drinks and eats; Romance Café is a great option.

In the north visit the Cabrits National Park trails, Fort Shirley garrison, a swim at Purple Turtle Beach or Douglas Bay, and then a late afternoon trip up the Indian River. Purple Turtle is handy for lunch and there are several decent restaurants in the Picard area for dinner. Try Iguana Café at Glanvillea for something a little different, or some great seafood at Sisters Beach Bar in Picard.

In the east go to Victoria Falls and/or Sari Sari Falls (but only when it isn’t raining). Riverside Café at Citrus Creek Plantation is a great place for a late lunch and a bathe in the Taberi River.

In the west, there is snorkelling at Champagne then down to Scotts Head for a climb up to the top of Cachacrou and then a swim and some more snorkelling to cool off . Late lunch and a cold beer in Scotts Head or Soufriere; Cocoyea by the church in Soufriere is a good choice and if you fancy lobster, give Anna a call at Chez Wen.