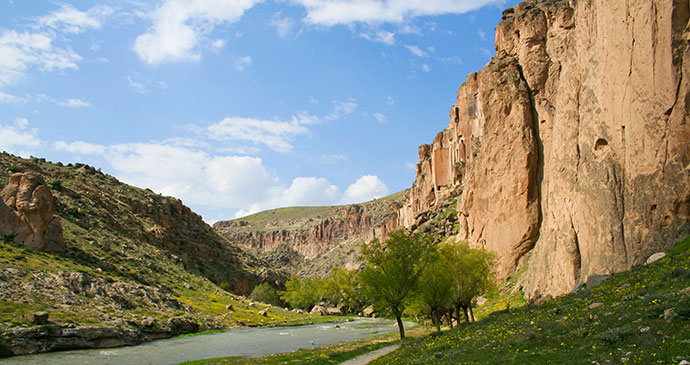 A view of the Ihlara Valley, Cappadocia © Lenar Musin, Shutterstock

Extremes of temperature are the order of the day in eastern Turkey, not just between winter and summer, but also between night and day. This is because of the presence of mountain ranges close to the coast and the great height of the interior plateau ranging from 800m to 2,000m. The most dramatic example of this is Kars, in the northeast, where the highest temperature recorded has been 35ºC in the daytime in summer, and the lowest –37ºC at night in winter. These enormous seasonal variations are among the widest in the world. Rainfall too is extremely variable. Along the eastern Black Sea coast towards the Georgian border, over 2,500mm fall per year, while parts of the central plateau, shut off by the mountains from the influence of sea winds, are arid, with annual rainfall less than 250mm. Temperatures around the coast are a little more clement, both on the Mediterranean and the Black Sea, but the Anatolian Plateau of the interior, raised up at around 1,500m and exposed to the full harshness of the elements, bears the brunt of the severe weather extremes.

The best time to visit the eastern Turkey is between April and September, with June probably the best month of all for most places. Even then, you should be prepared for a huge diurnal range, with temperatures between day and night routinely differing by over 20ºC, and your clothing needs to take account of this. The main tourist season runs from 1 April to 31 October, and the heavy winter snowfall means that many of the smaller hotels and pensions close from November to March. Ramazan, the Muslim month of fasting, is probably best avoided in eastern Turkey, as it is more strictly observed than in the Aegean and Mediterranean parts, and you may find it difficult to find places to eat during the day.

The high-summer months of July and August are extremely hot during the day, with temperatures often reaching 40ºC, though it still drops sharply at night. Cities close to the Mediterranean coast like Adana and Antakya are also very humid in high summer, and air conditioning in your hotel room becomes something that can make a big difference to your night’s sleep. The Black Sea swimming season is from June to early September, though the weather is not as dependable as the Mediterranean, with far heavier rainfall.

In the winter months some parts can be especially attractive, notably Cappadocia and Lake Van, when the snow enhances the landscapes and there are still clear bright days to be had. Temperatures of –30 to –38ºC are possible during the daytime up on the Anatolian Plateau and temperatures of –20 to –25ºC are normal from December to February, so your clothing needs to reflect that, but the roads are mainly kept clear by snowploughs, with only the highest of passes (above 2,000m) closed for the winter, and even then only on the more minor roads. If you want to avoid the crowds and pretty much guarantee having the place to yourself, the winter may be the time to come, as long as you do not want to climb any of the volcanoes or visit Nemrut Dağı, which, at 2,150m, is inaccessible because of snow from November to April.

‘Pot-bellied Hill’, the world’s earliest temple sanctuary in the hills north of Şanlıurfa, Göbekli Tepe was always destined to become eastern Turkey’s most famous monument. Its rock-carved animal reliefs date to 9000bc, a full 3,000 years before the earliest known city, turning our perceptions of prehistory on their head.

Higher than any mountain in the European Union, and Turkey’s highest peak at 5,165m, Mount Ararat is a magnificent permanently snow-capped volcano wreathed in legends and famed as the final resting place of Noah’s Ark.

The Georgian Valleys and Pontic Alps

Dramatic, heavily forested hills, liberally sprinkled with the ruins of Georgian churches tucked away in beautiful and remote green valleys.

Cappadocia and the Rock Churches

While Göreme is the most famous collection of rock churches, the wild fairy-cone landscapes of Cappadocia are in themselves a highlight, along with many other lesser-known valleys like Ihlara and Soğnali, not to mention the extraordinary underground cities.

The mountain and its remote, hilltop royal burial mound, where the King of Commagene surrounded himself with colossal statues of the gods, are snowbound except from May to October.

One of eastern Turkey’s most visited sites, set in deep evergreen forests and clinging Tibetan-style to a high cliff face, the monastery is reachable only on foot up a steep path, with impressively graffitied wall frescoes.

With the stunning architecture of its white limestone houses, mosques and medreses, Mardin belongs more to Syria and the Arab world, another example of the arbitrary borders of the region. On the nearby plateau lie scattered monasteries and churches, remnants of early eastern Christianity, as featured in William Dalrymple’s From the Holy Mountain.

Gazīantep and the Zeugma Mosaics

The now beautifully restored houses, historic markets and museums of Gazīantep are more Syrian in flavour than Turkish, and the magnificent Roman mosaics in the museum are the most impressive collection in the world.

Once a massive hilltop fort and the capital of the ancient Hittites, an advanced civilisation rivalling their contemporaries the ancient Egyptians and Babylonians.

The atmospheric burial place of the poet Rumi, founder of the mystic Whirling Dervishes. 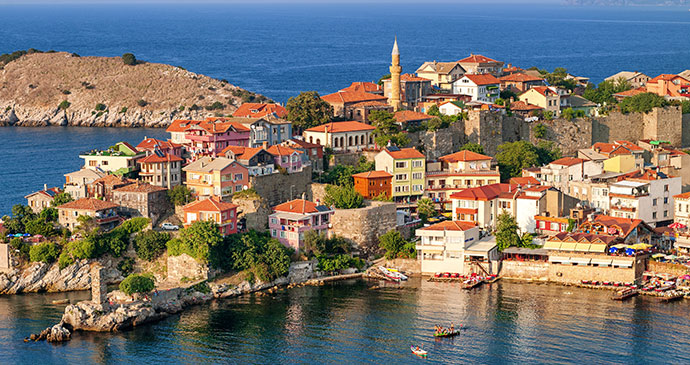 Amasra is probably the prettiest of the resort towns along the Black Sea Coast © Boris Stroujko, Shutterstock

The best direction of travel is from Adana or Antakya on the Mediterranean to Lake Van then north on to the Black Sea. The following itineraries show what can be done at a reasonable pace of travel. Those wanting to incorporate a period of rest and recuperation by the sea would be best advised to spend several days at one of the beach hotels near Silifke, before returning from Adana or Ankara.

With only three to four nights at your disposal, the most you can do is to get a taster of one area only, not least because of the travel time, as flying into the airports of eastern Turkey has to be done via İstanbul, Izmir or Ankara; often this cannot be accomplished the same day, thereby necessitating a stopover of one night on both the outward and return flights. For example:

• Fly into and out of Ankara, stay in one of the simple boutique hotels in Ankara’s old citadel, see the Museum of Anatolian Civilisations and do a day trip into the Hittite heartlands.

• Fly into Van and base yourself at one of the lakeside hotels while renting a car to explore the sites of the lakeshore.

• Fly into Diyarbakır, base yourself at the converted caravanserai, wander round the city’s mosques and churches on foot, then venture off by car to explore the monasteries of the Tûr Abdin.

• Fly into Nevşehir or Kayseri, then base yourself at one of the rock-cut houses or hotels of Ürgüp, Üçhisar or Ortahisar, while you discover the many surprises of Cappadocia with its underground cities and painted churches.

All four of the long weekend suggestions above lend themselves to being easily expanded to a week, or you can venture a little further afield. One possibility is to combine one week in İstanbul or on the Aegean/Mediterranean coast, with one week exploring a little of eastern Turkey to get the total contrast. Some suggestions for the eastern Turkey week are:

• Fly into Gaziantep airport, see the world-class Roman mosaics, and then head further east to Göbekli Tepe’s rock circle temples and the biblical sites of Şanlıurfa and Harran.

• Fly to Diyarbakır, head north to the colossal mountaintop statues of Nemrut Dağı, and south for a flavour of the Arab world to the historic towns of Mardin and Midyat with their exquisite architectural gems, now restored as boutique hotels.

• Fly into Trabzon, visit its miniature Aya Sofya before heading inland to the lush, green Pontic Alps to see the Sumela Monastery and the ruined Georgian churches tucked away in their valleys.

• Fly into Van, explore its lakeshore and island Armenian churches and Seljuk monuments, and venture into deepest Kurdish territory in Hakkâri for stunning scenery, castles and Urartian citadels.

• Fly into Kayseri or Nevşehir, spend five days exploring the fairy chimney valleys of Cappadocia with lots of walking, then head west to Konya, centre of the Whirling Dervishes.

With two weeks at your disposal you can explore eastern Turkey a little more fully, choosing the area that most appeals. A three-week trip allows you to start to get a proper flavour of the region, but only when you spend four weeks in the area will you feel you are beginning to get below the surface.