When to hike
Highlights

Summer is the most popular season for hiking and climbing in the Dinaric Alps, but the mountains are beautiful throughout the year. Owing to the complex climate influences at play in the region, the seasons vary in different parts of the chain. 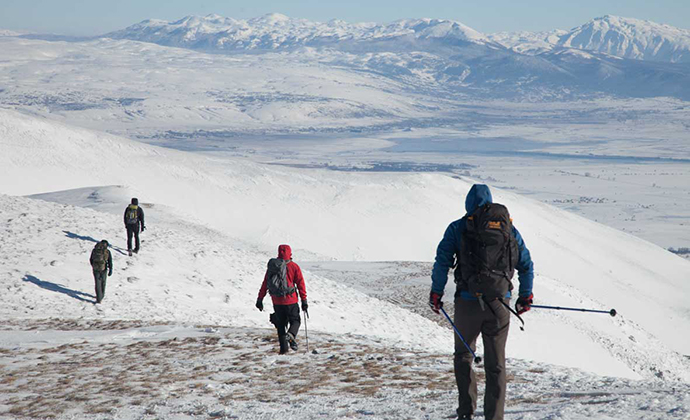 For the adventurous of spirit, winter is a great time to hike the Dinaric Alps © Miro Sumanović

A thick layer of snow covers most of the Central Belt during winter, and most local mountain roads are closed from October to May. For the adventurous of spirit, winter is a great time to hike the Dinaric Alps. It is the least crowded period, the snow can be walked upon after it hardens in January, and the air is the clearest. Winter is also a good time to climb the Maritime Belt, which is usually without snow, and is less crowded than at other times of the year.

Snow usually remains in the high mountains through the spring, but lower areas become more approachable beginning in March and April. On the coast and in lower Herzegovina, the sun warms the air quickly as spring begins. People swim in the Adriatic Sea as early as April – though, admittedly, mostly only the brave. Late spring is a wonderful time to visit anywhere in the Dinaric Alps, as the flora awakens, plants are in bloom, and light green shades begin to grace the woods and meadows.

Summer (July–August) is the high season for outdoor activities. Most of the remaining snow melts away in June, and shepherds travel to their summer settlements high in the mountains. This is the time when most tourists visit the mountains, but because it is also the time when most locals travel to the coast, trails are not crowded. It can be very hot and sunny in the Dinaric Alps during the summer, especially in the Maritime and Northeastern belts, as in the Pannonian Plain, and a light mist can often obstruct the full distance of great views. In Mediterranean areas, be careful to carry enough water at all times, consider taking breaks during the middle of the day, and do not expect much shade or other relief from high temperatures. August is the month with the lowest average rainfall in high-altitude areas.

Early autumn is a lovely time to explore the Dinaric Alps. Temperatures cool but remain warm, forests become alive with colour and high mountain meadows turn golden-yellow. The weather changes in late autumn, which is by far the rainiest period, and is accompanied by pervasive fog. Mountain peaks remain under clouds for days or even weeks, and receive higher amounts of precipitation than lower areas. In November and especially in December, winter temperature inversions begin, which are characterised by higher air pressure pushing long-lasting cold fogs into the valleys and lowlands, leaving mountaintops clear and sunny – classic conditions for the Balkan ski season! 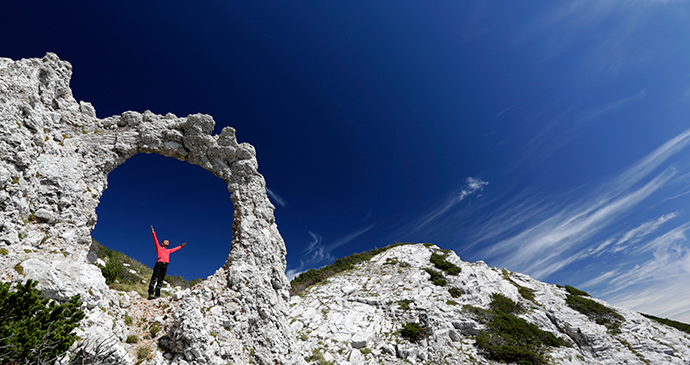 Blidinje is the natural point to start the real trekking on the Via Dinarica White Trail from the west. Blidinje is a vast valley, with a beautiful lake, ski centre and Franciscan monastery. The hike up to Vilinac on Čvrsnica Mountain from here is steep but an exceptionally beautiful hike with many rewards at the top.

Vilinac is a peak on Čvrsnica Mountain, where a small mountain hut of the same name is located. It can boast to having one of the best views to wake up to on the entire Via Dinarica in BiH. The hut is not open all year round so be sure to check for opening times and availability but it’s definitely a hotspot to spend the night high up on the White Trail.

The ‘Rebel’s Door’, as it’s called, is a large, perfectly circular geological formation on the White Trail between Vilinac and Plasa on Čvrsnica Mountain. It’s well worth the detour to scramble around on the rock formations and enjoy the stunning views of Diva Grabovica below and Prenj Mountain (the following stage on the White Trail) on the horizon.

Although Prenj Mountain is not the highest in the country, it is known to hikers as the mother of all mountains in Bosnia and Herzegovina. Its jagged peaks and daunting climbs have earned it the nickname of ‘Herzegovina’s Himalaya’. Hiking here is challenging and good navigational skills are necessary.

This semi-glacial lake is the reward after a challenging four days on Prenj Mountain. It is also accessible by car from the town of Konjic and is a good base from which to head either east or west on the Via Dinarica trail. It is a great swimming hole with plenty of accommodation facilities nearby, and is the location of many of the rafting operators who offer white-water rafting on the Neretva River.

The White Trail passes through this ancient village, the highest and most isolated mountain village in Bosnia and Herzegovina. This quaint, medieval-style highland settlement is the perfect place to overnight and experience the highland cultures that have long faded from Europe’s mountain communities. There is a beautiful mountain lodge that offers good accommodation and excellent food.

From the Boračko Lake area all the way to the village of Umoljani, the White Trail follows the ridges of the Rakitnica Canyon, one of Europe’s least-explored river canyons. The ridge walks along this 800m-deep canyon are world class and there are several access points for those with an adventurous spirit to scramble down to the river for a swim and to stare in awe at this raw beauty.

This place has been coined the ‘Yosemite of the Balkans’ with good reason. The park is home to the country’s highest peaks and a rich population of wildlife. It is, however, best known for the Perućica Primeval Forest (one of two remaining in Europe) and for its historical significance. This is where Tito’s Partisans broke through the Nazis in a decisive battle during World War II. The monument in the Tjentište Valley is a pilgrimage for many nostalgic former Yugoslavs.