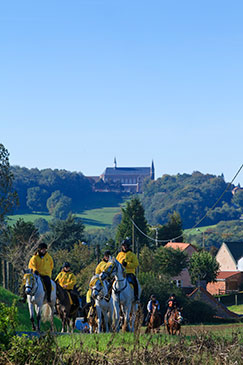 Lined on the north and west respectively, by the North Sea and the English Channel, Nord-Pas de Calais has a climate similar to that of southern England. Roughly speaking, this means year-long cool temperatures, especially during winter months, but with generally sunny weather in summer. This is usually at its most pleasant from late May to late September, with the peak holiday period between mid-July and mid-August. The region benefits from 1,600 sunshine hours a year and it actually rains less in the north of France than it does in the south.

The average summer temperature is around 18° C climbing to 25°C; the average in winter is 3.2°C. The highest level of rainfall statistically is in November, the lowest in April. The wettest areas are Artois, Haut Boulonnais and Avesnois, while certain areas to the north are as dry as the Côte d’Azur.

Mild spring and autumn months make the region ideal for off-season breaks, especially for outdoors types keen on walking, horseriding or sampling the string of beach activities along the Côte d’Opale. Buffeting wind is fine for kite-fliers, the chill waters less so for swimmers.

It’s not all about summer, sea and sand. Nord-Pas de Calais is a short-break destination, at least for the Brits, with year-round attractions. Opt for the winter and a good bet is the bevy of Christmas fairs; three of the best are those at Béthune, Calais and Arras. Lille’s is another; the trip there by Eurostar being an added bonus. The December Turkey Festival at Licques, less than 40 minutes’ drive from Calais, provides traditional family fun, with an excellent regional market to boot.

January marks the famous Dunkirk Festival, a ring-a-ding-ding affair which, being mainly celebratory for the locals, has an added air of authenticity. February is generally a miserable month, though the Bailleul Carnival is a boisterous way to experience a truly Flemish fling.

Better still, wait for spring. Watch the kites flying at the International Festival in Berck-sur-Mer or enjoy a boat trip along the marshland waterways around St-Omer. But wrap up warm if you’re going before early May: it can be chilly. Plump for late spring or early summer, and the region’s at its freshest, with the coastal roads delightfully traffic-free. Though this increases, congestion is never that bad and, bar the peak school-holiday season, summer is an ideal time to head for the rural peace of the Seven Valleys, behind Le Touquet, or the Avesnois, including perhaps a day or so in Lille.

Autumn, like spring, has its seasonal benefits, especially for golfers, walkers, cyclists, horseriders and the like. It is also ideal for city visits. Arras, Douai and Cambrai can all match the charm of the more obvious tourist hotspots, such as St- Omer and the coastal ports of Calais and Boulogne. So, too, can much smaller places, of which the Cassel area, around an hour’s drive from Calais (even less from Dunkirk) is an all-time favourite.

Nord-Pas de Calais is small enough for visitors to put together a mix-’n’-match collection of visits without travelling vast distances from Calais or the other ports. If you have only one day, head for a seasonally sunny day trip to Monts de Flandres, taking in Mont des Cats for the view and Bailleul for its architecture.

For something different, visit the Giants Festival in Douai in July, staying overnight and travelling there and back by Eurostar via Lille. Failing that, spend a day in St-Omer and take a boat trip on the marshland, or visit La Coupole, the former German concrete dome which now unlocks the hidden side of Hitler’s World War II rocket projects.

• Lille and Arras for an overall impression of the major cities of Le Nord and Pas de Calais.

• Arras, including the battlefields, and Montreuil-sur-Mer, with perhaps a trip to Desvres for its pottery or the Beussent chocolate factory in the Seven Valleys.

• Treasures of Le Nord, including Le Quesnoy for its ramparts, Maroilles for its famous cheese, and the Sars Poteries for France’s top collection of contemporary glass.

• Côte d’Opale (Opal Coast), including the Lace Museum at Calais, NAUSICAA – Europe’s largest exhibition of the underwater world at Boulogne, and the delightful municipal museum at Berck-sur-Mer.

One to two weeks

With so many outdoor activities on offer, you could easily while away a week along the coast, with or without the family, then add the short trips above to make up the second. Alternatively, simply blend a number of themes and take to the road. The region is small enough to combine say the battlefields with a short city stay at either Lille or Arras; Cambrai – or Le Cateau-Cambrésis for fans of Matisse – and the Avesnois likewise bring together the contrasting styles of two little-known areas. You could even cover the entire eight regions described in the guide: the coast, including the lesser-known inland villages, combined with Arras or Cambrai and Le Cateau-Cambrésis – this would create a powerful town and country combination.