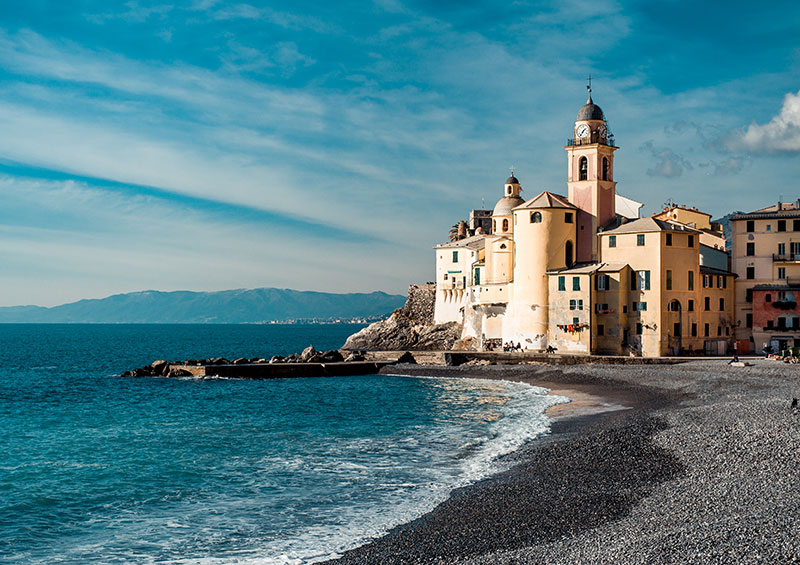 Liguria is one of the sunniest places in Italy despite its northerly position © Alexander Zihonov, Shutterstock

It is generally a sunny place with an average of 4 hours of sunshine a day in winter and 9 in the summer. Indeed it is one of the sunniest places in Italy despite its northerly position. Annual average relative humidity is 68%, ranging from 63% in February to 73% in May. Rainfall can be abundant at times, and Genoa and La Spezia can see up to 2,000mm of rain in a year. October and November are the wettest months. Waterspouts, tromba d’acqua, have become increasingly common in recent years. They are, put simply, tornadoes that happen over the sea. In bad weather it is advisable to take shelter inside as heavy rain can cause dangerous flooding and when a waterspout hits land it can cause considerable damage. Snowfall is sporadic, but does occur once or twice per year.

The average yearly temperature is around 19°C during the day and 12°C at night. Even in the coldest months of January, February and March, the average daytime temperature is 12°C, which makes for a pleasant stay even in the depths of winter. The average yearly temperature range is only 5.4°C, which is one of the lowest in Italy. In summer, it is usually between 25°C and 28°C, and 21°C at night; temperatures are lower than in other parts of Italy as the sea breezes cool the air, although in a heatwave temperatures can reach 36°C. The sea is generally warm and from June to October is 19°C or higher. It is mainly calm, with a tidal range of 30cm.

Don’t be fooled by the sea, which can look like a millpond. The Italian Riviera isparticularly prone to fierce storms, heavy rainfall and rough seas, so always check weather reports before setting out.

Liguria is a windy place and the wind usually blows from the southeast, bringing humid and warmer air from the sea. Summer often comes to a close with dramatic thunderstorms that feel like they have jumped out of Mary Shelley’s Frankenstein.

With the mildest of climates, tourists visit Liguria at all times of the year, but November and February can be wet and are best avoided. There are things to do all year round: from fascinating museums and fabulous palaces to visit, to beaches and wild mountain countryside to explore.

There is, however, a clearly defined high-season that runs from May to September and the coast can get very busy, especially at weekends. It is hot in Liguria in summer and it is not the best time to explore Genoa. It is essentially a beach experience in this season but it is also a beautiful period to spend time in the mountains, which are degrees cooler than the coast. August can be disappointing for visiting Genoa, as many restaurants close for the entire month and the city can be uncharacteristically empty.

In winter, when the air is clear and the views are at their best, it is a joy to walk along the Cinque Terre path in peace and gaze out across the sea to Corsica. Spring and autumn are best for sightseeing and any kind of sporting activity that doesn’t involve cooling off in the sea. 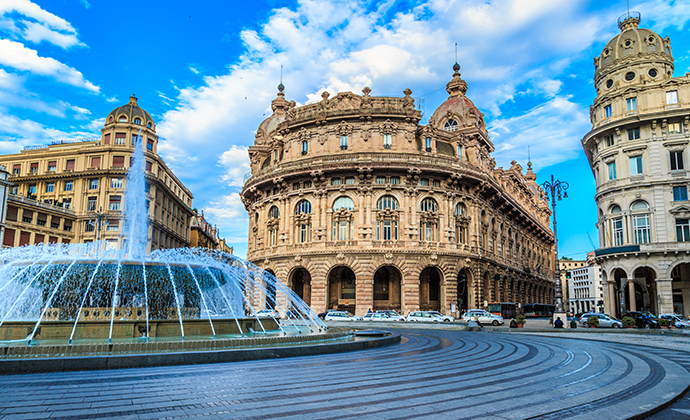 Once considered the powerhouse of medieval Europe, Genoa is teeming with culture © Garsya, Shutterstock

Liguria has some of the most stunning coastline in the Mediterranean; it includes the Cinque Terre, one of Italy’s top tourist attractions. Dramatic cliffs plunge into a deep blue sea; there are tiny rocky coves and beautiful seaside villages, like the world-famous Portofino. That said, Liguria isn’t all about glitz. The Ligurians like the simple life and the hinterland is well off the tourist track. This is somewhere to have a truly Italian experience.

For historians and art lovers, Genoa has sumptuous palaces, stuffed with old masters and was once the powerhouse of medieval Europe. Its old town is one of the continent’s largest and refreshingly authentic. It is an excellent option for a short break.

One of the real wonders of Liguria is its fantastic food. This is the home of pesto, and you will never have eaten a version of this sauce as tasty as the one they make here. Genoa once had a vast trading empire that stretched to the Near East, and the Genoese as a result adopted the Arab love of ice cream and candied fruit. What is truly fascinating about eating in Liguria is that, although it is Italy’s smallest region, the cuisine is highly varied and changes from valley to valley. Trying the flagship dishes won’t break the bank either, as the Ligurians are a thrifty lot and live off simple food.

Fortunately Liguria is an outdoor place, so you can burn off the calories hiking along the mountain tops, which offer stunning views along the coast, snorkelling and swimming in the sea or cycling along the mile upon mile of coastal pathways. Local traditions are important and Ligurians love an excuse for a party, and especially firework displays. Village festivals, often with very ancient origins, abound; and there are colourful religious processions and events throughout the year.

Base yourself in Genoa. Spend one full day exploring the city and trying out some of its fabulous restaurants. On the second day take the train to Camogli. Eat lunch in La Nonna Nina in San Rocco and then walk across the promontory down to Punta Chiappa and catch the boat back to Camogli.

Spend two nights in Genoa exploring the old town and visiting the palaces and museums. Then go to Camogli for two nights; from here, take a trip to the monastery of San Fruttuoso and visit Portofino for a day, and then head for the Cinque Terre. Spend a night in Corniglia before moving on to Porto Venere, where it is time to unwind and take the boat to Palmaria Island for a day on the beach. As you journey back up the coast, stop off at Sestri Levante before heading home.

Spend four nights in Genoa; this will give you time to see everything that the city has to offer and take a trip on the narrow-gauge railway up into the mountain valleys behind the city. Then spend two nights in and around Portofino or Camogli. Take two nights to explore the Cinque Terre and spend the next night in Porto Venere. Then catch the train from La Spezia to Varazze. If you stop off for two nights here you can get the best of the hinterland as you will have time to discover Monte Beigua. Next stop is the tiny walled town of Noli. Then head for Imperia, stopping en route to see the caves at Toirano. Finish your trip with two nights in Triora, deep in the mountains.

With three weeks you have time to see all the highlights of Liguria. Start at the French border. The Mediterranean beckons, so spend the first night in Bordighera. Then head up into the mountains to the hilltop towns of Apricale and Triora. Then it is time to head back for the coast via Taggia  to Imperia. Take a trip back up into the mountains, basing yourself for a couple of nights in Borgomaro. Kick off week two exploring the area around Varazze and relaxing by the sea. After this you’ll be ready for city life and four nights in Genoa. Week three gives you plenty of time to explore the Riviera di Levante as described in the one-week itinerary, but you will also have time to visit the medieval town of Sarzana.