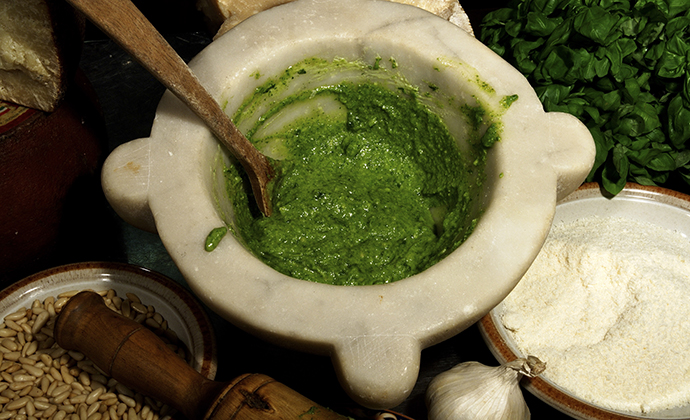 Restaurants tend to open from 12.30 to 15.00 and from 19.00 until late on the coast. Inland restaurants often close at 21.00. Not all restaurants open for lunch and some only open at weekends. There is a smoking ban in cafés, restaurants and bars. Ligurians don’t eat much for breakfast. It’s usually a shot of espresso and something sweet. Italian breakfast is a kid’s dream. In good B&Bs and agriturismi you will get a mouth-watering array of cakes and biscuits. Hotel breakfasts are often a waste of time, so avoid paying for them if you can and go to a café.

Ligurians have a reputation for hard work and are more likely to eat a piece of focaccia, fl at bread, than sit down on a daily basis to a large lunch. Part of this culture probably came from the fact that when the men were away at sea, the women were busy keeping the place ticking over, so didn’t have time to cook, and preferred to skimp, so there was plenty when their husbands returned home. Meals are less formal in Liguria, and less rigid than in other parts of the country.

Genoa’s Chamber of Commerce supports restaurants that use local ingredients and serve local dishes and Ligurian wines. Those that meet their criteria are given the Genova Gourmet stamp of approval, as are local producers making traditional food products.

The taste of Liguria

Abridged from the Taste of Liguria section in Liguria: the Bradt Travel Guide

Food is an essential part of the Ligurian experience and a very local affair. All of Italy’s regions have their own distinctive dishes, many of which are never eaten out of the area in which they are made. In Liguria the dishes change from village to village much like the dialect, although there is a core group of common ingredients and techniques. The isolated narrow mountain valleys were linked only by dirt-track roads right up until the 1960s and, as a result, each had their own cuisine based exclusively on what was at hand. As a result it is a lean and healthy diet centred on vegetables, fruit, olive oil, wine, pasta and fish. The wild herbs that grow on the Ligurian hillsides are the basis of nearly every dish and were traditionally harvested to make preboggion, a mixture of herbs that have been simply boiled and dressed with olive oil and lemon. This mixture is used to stuff the large triangular pasta, pansotti, and to fill gattafin, a large, fried ravioli from Levanto.

Nowadays all Ligurians eat local variations of pesto, basil sauce; focaccia, a flatbread with olive oil; farinata, a chickpea-fl our pancake; rabbit with olives and herbs; rockfish and anchovies in soups, stews and tarts, or stuffed, fried or grilled; stoccafisso, dried cod; ravioli or other filled pasta; vegetable tarts and stuffed vegetables; and pandolce, a cake with candied fruit. Similarly, every serious kitchen from Sarzana on the edge of Tuscany to Ventimiglia bordering France will be stocked with local olives and oil, pine nuts, salt-preserved anchovies, fresh and pickled vegetables like courgettes, chard, tomatoes and aubergines, white beans, chickpeas and preserved mushrooms, and the region’s ubiquitous herbs.

Extra virgin olive oil has sat at the heart of Ligurian cuisine since ancient times and is the key ingredient in the best-known Ligurian delicacies such as focaccia, farinata and pesto sauce. The most famous varieties are made from taggiasca, pignola, lavagnina and razzola olives and since the 16th century it has been an important local industry, especially in the hills and mountains behind Imperia. Here the olive oil, thanks to the more temperate climate, is more delicate and fruitier than that produced in other parts of Liguria. Taggiasca olives are a tasty aperitif and are used to make the local olive paste.

Extra virgin olive oil has sat at the heart of Ligurian cuisine since ancient times and is the key ingredient in the best-known Ligurian delicacies such as focaccia, farinata and pesto. The most famous varieties are made from taggiasca, pignola, lavagnina and razzola olives and since the 16th century it has been an important local industry, especially in the hills and mountains behind Imperia. Here the olive oil, thanks to the more temperate climate, is more delicate and fruitier than that produced in other parts of Liguria. Taggiasca olives are a tasty aperitif and are used to make the local olive paste.

The king of the Ligurian kitchen is, however, basil. Indeed the word basil, basilico in Italian, comes from the Latin translation of the Greek βασιλικός, meaning ‘regal’. The best basil in the world is grown in Liguria, in giant greenhouses perched precipitously on the hillside between the motorway and the rather run-down flats of Genova Prà. With a view of the docks and the salty air, it’s the perfect stressful environment to grow a really pungent basil plant. Basil is a serious affair and since 1992 the Confraternita del Pesto have guarded the authenticity of the sauce. 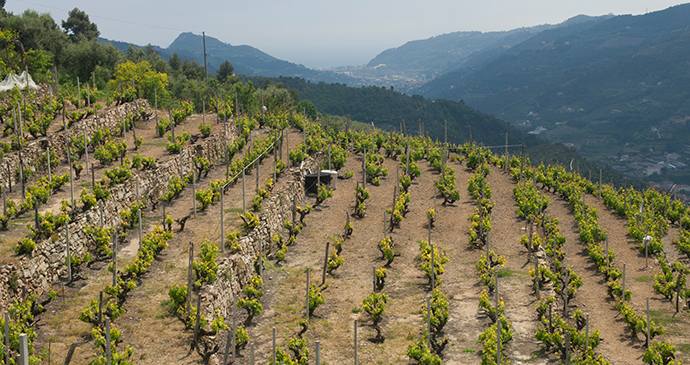 Although lesser known for its wine production, Liguria offers a variety of different types of vines © Photo Archive Regional Agency in Liguria

Liguria doesn’t produce vast quantities of wine and it is little known outside of the region. Wines are classified according to DOC, Denominazione di Origine Controllata, which means that it has been produced according to prescribed standards and quality. DOCG, Denominazione di Origine Controllata e Garantita, applies to very few wines, notably Barolo from just over the border in Piedmont, which is widely available, and the fortified Sciacchetrà from the Cinque Terre.

Try Rossese, a ruby-coloured red that turns a garnet colour as it ages and which complements meat and game dishes. It comes from the vineyards around the ancient village of Dolceacqua near Ventimiglia. The vines grown in the high Arrosica Valley behind Imperia produce Ormeasco, another red wine which comes from the vineyards around the dubiously named Pornassio, which has the same connotations in Italian. This local wine goes under the name of nearby Ormea. Closer to the coast Pontedassio, San Lorenzo and Diano Castello are the home of Vermentino, a fresh white wine that is a good accompaniment to fish and seafood appetisers. The Vermentino produced around Sestri Levante is also good.

Pigato from the Albenga Valley, notably the tiny villages of Salea, Ortovero and Ranzo, is a lightly fragrant straw-yellow white wine with a bitter almond taste. In the vineyards around Finale they produce a particular, fresh and slightly acid white wine, Lumassina, also called Buzzetto, which in dialect means ‘still unripe’; so-called as it is made with grapes that ripen late. Close to Genoa the local wine is from the Val Polcevera. It is a white wine which is both still and sparkling.

Sparkling wines are also produced in the Golfo del Tigullio. Further east, in Levanto, the Colline di Levanto quality assurance label protects both white and red wines, and both are worth looking out for. The grapes from the precipitous vineyards that cling to the cliffs of the Cinque Terre turn into Sciacchetrà, made from grapes naturally dried on mats. The Romans admired the wine from the hills around Luni, Colli di Luni, which has become increasingly popular in recent years.

There is no shortage of places to stay in Liguria, from super luxury to mountain refuge. Accommodation can get booked up in July and August so if you are planning a trip in high summer, you should think about booking in advance. That said, the economic crisis has had an effect on tourist numbers and on sites like booking.com you can find very good places at the last minute.

There is a massive choice of where to stay. Hotels, alberghi, tend to be mid-range and living on their laurels along most of the coast, but there are also luxury options, notably in and around Portofino. The star system in Italy doesn’t make a four-star a classy hotel. You get stars for amenities and location, not quality of service. Thereare also lots of B&Bs and in many places they are a better option than hotels as they are often more modern and stylish, especially in Genoa and along the Cinque Terre.

There are a vast number of apartments and rooms on airbnb.com. It has brought a wide variety of accommodation on to the market and given much needed competition to hotels along the coast. It has also kept prices down, especially in Genoa. Just be careful to look at the location of the property closely, especially when the motorway and the railway line run close to the coast.

It’s easy to find apartments but good campsites are more difficult to come by, particularly in areas away from the coast. Some have closed in recent years as they have been washed away in flash floods. A fun option is a mountain refuge, a rifugio. Accommodation is often in dormitories and is very cheap. There are a few hostels in Liguria as well. Staying in an agriturismo, on a farm, is also a great way to get a real feel for Liguria. You will find them on booking.com as well. Standards vary and be sure to check online reviews before you book. They often serve their own homegrown produce and this is the place to taste some really good home cooking. Religious institutions, like monasteries and sanctuaries, often also rent rooms. Beware that many B&Bs, rifugi and agriturismi don’t take credit cards, so make sure you have the cash before you set out for a rural bolthole.