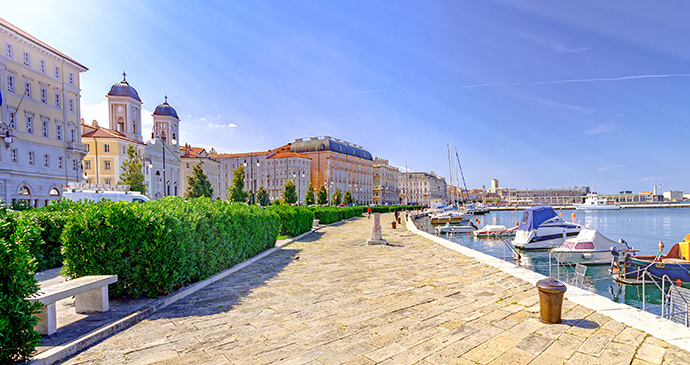 Throughout the year Trieste is a place to relax and sit in a café on the harbour, watching the big ships come into the port © Boerescu, Shutterstock

Most of FVG enjoys a very agreeable climate. Average daily highs in the centre range from 8° to 8.5°C in December and January, to 28°C in July and August. Precipitation is spread throughout the seasons; it’s slightly rainier in the spring and in September and October. The variety of landscapes means a variety of climate too. Weather in Trieste is much the same as Udine for most of the year, but on average a couple of degrees colder in winter, with an occasional touch of snow. This comes courtesy of the Bora, the northeast wind that can come shooting down from the Carso at up to 150km/h.

Up in the mountains, of course, it’s a very different story. Much cooler temperatures year-round are the rule. If you’re here in winter (and most of autumn and spring), do as the locals do and check the meteo every morning before setting out.

Friuli Venezia Giulia offers something for every season: in winter snow and sports in the mountains (where Carnival in February is a very big deal), and a chance to visit art cities Trieste and Udine without the crowds. Spring temperatures are perfect for touring by car, by bike or on foot, and May and June bring flowery Alpine meadows. Summer is perfect for lolling on the beaches and for sports in the mountains, while autumn with its cooler temperatures brings on the colour in the mountains and in the Carso, fewer crowds, and mushrooms and game dishes in the restaurants.

This little-known region offers an astonishing amount to see and do. Start with the capital, Trieste, Italy’s coffee capital and portal to Mitteleuropa, where Latin, Slavic and Germanic cultures have meshed to create a fascinating city squeezed between sea and karst, still delightfully off most tourists’ radar. Second city Udine, the heart of Friuli, is a delight: a stunning art city with its Venetian piazza and luminous Tiepolos. From here it’s a short hop to the World Heritage sites: ancient Aquileia, with its fabulous mosaics, the early medieval Lombard capital of Cividale del Friuli and the unique Venetian citadel town of Palmanova. Then there’s the elegant border city of Gorizia, once a summer resort of the Habsburgs, the walled town of Gradisca d’Isonzo; San Daniele del Friuli of the famous hams, mosaic-filled Spilimbergo; Sacile the ‘Garden of the Serenissima’ – just to name a few of the towns along the way.

Unspoiled nature is a highlight throughout: with three spectacular mountain ranges, rushing rivers, lakes and canyons, crazy karst topography (including the Grotta Gigante, the biggest show cave in Europe), bird-filled wetlands and lagoons, and long sandy beaches, FVG offers gorgeous scenery and every conceivable sport and activity in a relatively small space. The food is delicious, and quite different from the rest of Italy, a mix of the best of three cultures, the mountains and the sea – the perfect match for the sublime white wines of the Collio and Colli Orientali. 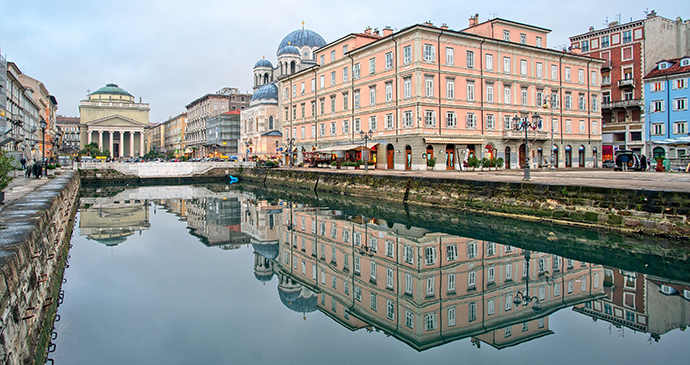 By train and bus

Public transport here is excellent and convenient throughout. Start with three days in Trieste, with side trips to Emperor Maximilian’s seaside folly, Miramare, and the Grotta Gigante. Then move on to Udine for a day of art, castles and Tiepolo – and use it as a base for easy day trips by train and/or bus to the Lombard capital of Cividale del Friuli, the Venetian fortress town of Palmanova, ancient Aquileia, the beaches of Grado and the charming border city of Gorizia.

On foot or by bike

FVG reveals more of its secrets if you can take it slow for a few or more days. Among the most rewarding routes: a week on a bike from Salzburg to Grado along the Ciclovia Alpe-Adria Radweg, or walking the 43-stage Alpe-Adria Trail from Austria to Muggia, the tenday Cammino Celeste from the Julian Alps to Grado, or hike through the peaceful mountains of Carnia between its little parish churches on the 20-day Cammino dei Pievi.