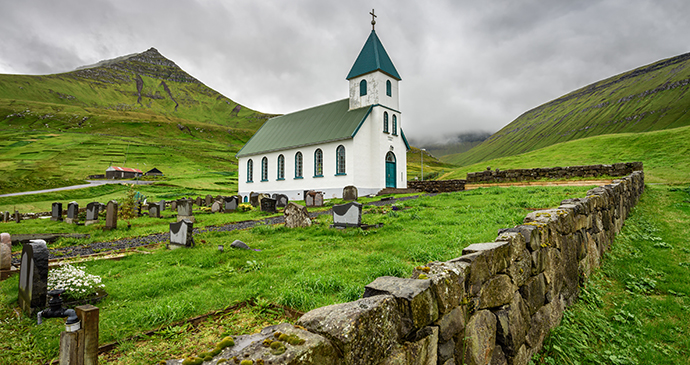 This quiet pastoral village, dauntingly closed in by mountains and with a harbour set in a deep natural cleft in the rock, is one of the Faroes’s most charming.

This quiet, pastoral village, dauntingly closed in by mountains and with a harbour set in a deep natural gorge in the rock, is one of the Faroes’s most charming – and most visited. In Faroese, gjógv means ‘cleft’ or ‘gorge’, and when viewed from the walking paths that lead out on clifftops above the harbour, it does indeed appear as if the entire village is clinging to the edge of this 200m-long natural gorge. A set of 69 steep concrete steps leads down to the head of the inlet where often a couple of rowing boats are tied up on the slope. In rough seas boats are winched out of the water to prevent them from smashing into the rocky walls of the cleft. At night, the gorge is occasionally spotlit with coloured lights to stupendous effect. Beginning from the steps at the top of the cleft, a short footpath leads out to the clifftops above the mouth of the cleft where there are a couple of benches offering good views of the sea below. Nestled on either side of the Dalá river, which flows right through the village, the majority of Gjógv’s houses are modern in appearance, although a couple of older wooden turf-roofed structures can still be seen close to the steps down to the harbour. A village grocery store operated in one of these buildings for over 100 years until it closed in 1992.