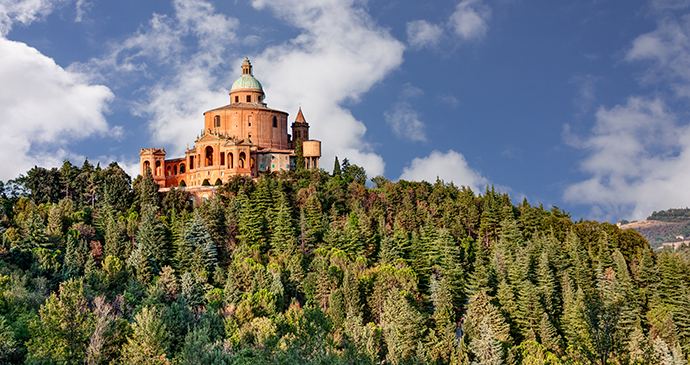 The Sanctuary of the Madonna di San Luca sits atop a forested hill in Bologna © Ermess, Shutterstock

The layout seems to have been designed by a government committee. Start with a road that runs almost perfectly straight for 320km (200 miles). String all the cities along it, at regular intervals. Put all the hills on one side of the road, and all the flatlands on the other. Sprinkle the whole thing liberally with red bricks, (former) Communists and tortellini, and you couldn’t get anything else but Emilia-Romagna.

The joke is, it probably was designed by a committee. Sometime near the close of the Second Punic War, some Roman senators, engineers and military men sat down together and came up with the plan for developing this newly acquired territory. The biggest expanse of flat land in Italy gave them a chance to put the Roman passion for rationalism into practice on a massive scale, and their hardnosed pragmatism has marked everything in the region’s life for the last 2,200 years: its politics, its ways of thinking, and even at times its art. That straight-as-an-arrow Roman high road that ties everything together, the Via Emilia, gave the land its character along with its name.

After their orderly and efficient start as Roman colonies, the towns along the Via Emilia went their separate ways in the Middle Ages. Each one picked itself up from the rubble of the Dark Ages and built itself into a prosperous free city, and each had a busy career battling popes, emperors and each other. Eventually each one fell under the rule of city bosses, and as these signori turned into aristocratic dynasties, they added mightily to an already impressive hoard of castles and cathedrals, palaces, churches and frescoes.

Since then, the region’s accomplishments have been many. Emilia-Romagna is the cradle of many of Italy’s most innovative film directors: Fellini, Bertolucci and Antonioni. Before cinema, almost every town, large and small, built an ornate theatre-concert hall as a proud civic centrepiece, and a testimony to its devotion to the arts. So it shouldn’t be surprising that the region is also the home of many of the nation’s musical greats, from Verdi and Respighi to Toscanini and Pavarotti.

‘Emilia-Romagna’ is a slightly artificial region, given official status only in 1970 when Italy began decentralising power to local governments. Another committee decided to lump together Emilia, the stretch from Piacenza to Bologna, with the Romagna to the east, a territory with a history shaped by centuries of rule by the pope. But it does hang together. One feature that all its towns have in common is their radical politics, born over a century ago, and surviving two wars and Mussolini to blossom after 1945 as ‘Red’ Emilia-Romagna, where Communism with a human face gave the region Italy’s most efficient and enlightened government, and at times even made the businessmen happy. 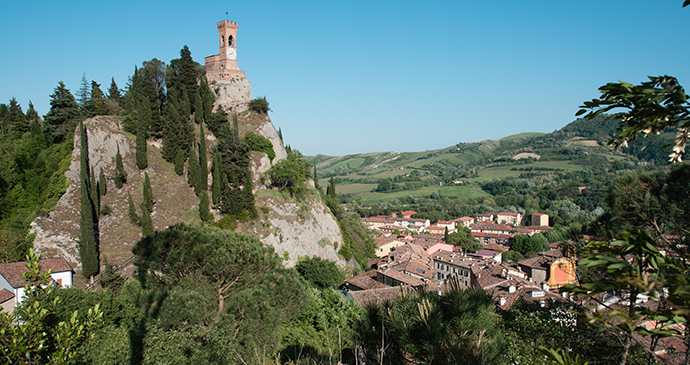 Brisighella, a certified ‘Slow City’, is one of the region’s prettiest colour-drenched villages © Directornico, Shutterstock

Along with radicalism, this region’s other claim to fame is a well-established reputation as the home of Italy’s finest cooking. When you begin to see how these two contradictory passions fit together, you’ll understand the odd brand of earthy pragmatism that sets Emilia-Romagna apart. It helps to notice how simple this famous cuisine really is – all you need are the right ingredients, which the patient farmers of the region have had centuries to perfect. Here, even a piadina sandwich from a street-corner stand can be a strangely transcendent experience.

Yet, whether the food comes from the street or the serious, highly rated temples of tortellini that turn up in the most out-of-the-way villages, dukes and revolutionaries agree that living well is the best revenge. It all seems paradoxical at first. Emilia-Romagna is the place where plain brick churches conceal preposterously quadratura ceiling frescoes, where everybody knows the lyrics to at least one Verdi aria and one old socialist anthem, and where platoons of women in mink pedal bicycles through the town centres on their way to the grocer or the theatre. Stay around for a while, and it will all start to make sense…

We invaded Italy in 1981 by train from Victoria Station, with bags checked through to Catania. We didn’t get our bags back, but instead we got a massive helping of Italy. Our affair with that gorgeous, delightful, sometimes maddening but deeply simpatico country has gone on for a long time since then. We started out pushing a baby stroller over the cobbles of every Italian island, destroying several strollers in the process. Our children learned reading, writing and dialect songs in an Umbrian village school, while we took turns roaming every corner of the country, coming home on Friday nights with lots of little presents and stories to tell.

That was 20 books ago. We’ve done guides to every region and major city, and we only had to stop because we ran out of Italy. We wish there were more of it. There’s one part of it readers always ask about: Emilia-Romagna. That made us think too – with recollections of great works of art, walks in the spring fog and some memorable plates of tortellini. It’s a fashionable place, suddenly, and we have been spending more time there, writing an app guide to Bologna and Modena, along with a second one, an Italian Food Decoder, and now this comprehensive guide to the region.